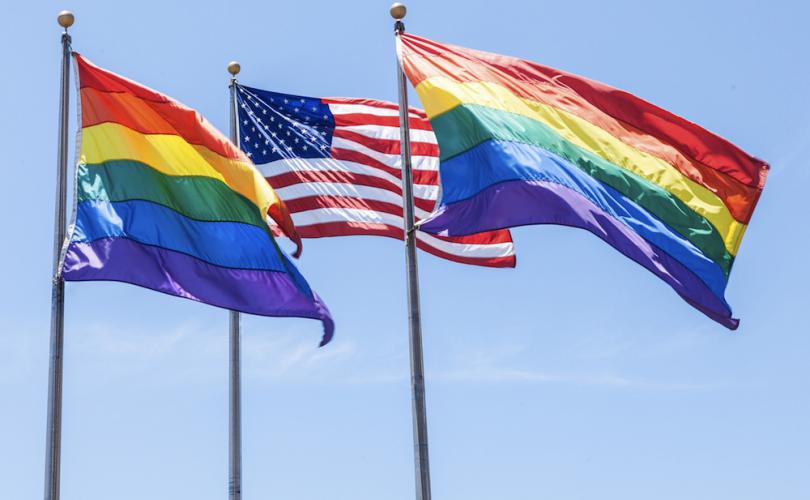 Our society conforms itself to revelation, or to revolution. It cannot do both.

June 9, 2021 (LifeSiteNews) — Nothing highlights the extent to which the Overton Window has shifted away from Judeo-Christian values to those of the sexual revolution like children’s entertainment during “Pride Month.” Those of you who follow the culture updates posted in this space will be aware that the queering of children’s entertainment has been moving at a rapid clip for some time; but in June, things tend to speed up. There was the Blue’s Clues jingle for kids sung by the drag queen, and new kid’s content for Pride is being pumped out almost daily.

There’s plenty of swag being advertised, too. Nickelodeon is pushing shoes for kids that sport Sponge Bob Squarepants with the Pride rainbow and the slogan “With Imagination, I Can Be Anything I Want.” In this context, of course, they mean bisexual, transgender, or any of the other options available in our ever-expanding alphabet of sexual minorities. Sponge Bob Squarepants, incidentally, was outed as gay a while back. Children’s cartoon characters remained closeted until it became corporately convenient to out them.

On June 5, Nickelodeon also released a song targeted at kids called “The Meaning of Pride,” featuring “Drag Queen Nina West,” and designed to teach kids the precepts of Pride — an original for children to “celebrate by lifting up voices in the lesbian, homosexual, bisexual, transgender, and queer+ community!” If children (or adults, for that matter) are unaware of what that lengthening acronym refers to, you can be assured that there is more children’s programming coming your way to explain it all. Parents who like to use cartoons to babysit their kids for an hour or two can be assured that their children will be well taken care of by a very educational drag queen. (It does bear mentioning, however, that the video has 1,000 likes and 9,700 dislikes.)

On June 8, it was announced that Nickelodeon was going even further to mainstream transgenderism. According to The Christian Post: “In an exclusive interview with Variety, trans-identified actor Michael D. Cohen announced that 13-year-old Sasha Cohen (no relation) has been cast on an upcoming episode of the TV series ‘Danger Force,’ which will air on June 19. Sasha Cohen’s appearance on ‘Danger Force’ comes six months after Michael D. Cohen first launched the Trans Youth Acting Challenge.” Capitalism follows culture, and trans kids are very trendy at the moment.

Not to be outdone, the Cartoon Network has also released a children’s Pride video to “celebrate lesbian, homosexual, bisexual, transgender, and queer+ kids and families. The video features Jax, who uses “they/them” as pronouns and is the Youth Ambassador for San Diego Pride; families with two dads; and a series of slogans encouraging kids to engage in self-expression. In this context, of course, the sorts of things kids are encouraged to express goes without saying. “Happy Pride Month!” the video says.

I’ve written several updates on this sort of thing, so readers may have the tendency to roll their eyes and say: “We get it, the culture is awful.” But I think there’s an important point here for parents to recognize that many have not: Christians must opt out of mainstream culture in America. This has been true for some time, but now there is no way parents can pretend that there is any such thing as innocent children’s entertainment. That entertainment is produced by companies who have an agenda for your kids. They’re not being secretive about it, either. All of the available polling data indicates a sea change in the views of young people on lesbian, homosexual, bisexual, and transgender issues, and the reason for this is obvious: All of the cultural currents are flowing in one direction. To swim against the tide is to take a stand.

Our society conforms itself to revelation, or to revolution. It cannot do both.