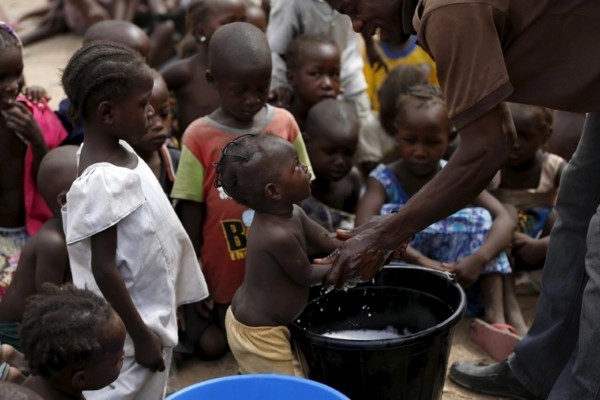 Children rescued from Boko Haram in Sambisa forest get their hands washed at the Internally Displaced People’s camp in Yola, Adamawa State, Nigeria. Over five years ago. This has gone on daily for YEARS without any help or even much notice from Western governments of people living in Western nations. Hundreds of traumatized Nigerian women and children rescued from Boko Haram Islamists have been released into the care of authorities at a refugee camp in the eastern town of Yola, an army spokesman said. | (Photo: Reuters/Afolabi Sotunde)

Genocide is taking place in Nigeria. Islamists working daily to completely, utterly attempt to remove, murder, enslave, or convert Christians or any non-Islamic person. And the Nigerian government is in collusion although they proclaim the opposite. And Western governments and peoples do nothing. Because, well, it’s Christians in Africa. So who really cares about Christians in Africa, right?

Ever hear about this on any national news broadcast? Local news broadcast? Read about it in what passes for a newspaper? Didn’t think so. But there’s air time filled with rubbish about celebrities and every inane, moronic, foolish thing under the sun isn’t there? But can’t report about this can they?

Because it’s about Christians in Africa. It’s about what Islam and Islamists are TRULY, REALLY like, and about. As they obey the Qur’an.

Can’t ever report THAT can anyone?

Islam and evil are revered and have become sacred.

Christians expendable and their genocide is ignored and actually applauded in most circles as God, the Lord Jesus Christ, the Holy Spirit, the Bible, and those who believe and are disciples of Jesus are the enemy of everything these days, in these last of the last days of history, as it has been known and all of Bible prophecy about to be fulfilled.

What a vile, dark world this has become.

And it’s only going to get worse.

That’s a fact, reality, our future history. If you don’t believe it? Get ahold of a Bible and learn not only past and present history — but the only book to present and provide FUTURE history. And who cares to know and respond? To look, seek, knock, ask and learn? To hear the word of the Lord and respond?

I hope and pray that you are one of them though. One of the remnant. And if you’re not? I pray you’ll turn to God, to Jesus, to the Holy Spirit, to the inerrant word of God and come out of the darkness and into the Way, the Truth, the Life, and the Light only Jesus, only God, only the Holy Spirit, only the word of God can afford any individual.

A Muslim woman who formerly lived in Nigeria and witnessed persecution firsthand criticized the Nigerian government’s response to the rampant violence impacting millions and told a top United States religious freedom oversight body that the country is a “time bomb” in dire need of reform.

The bipartisan U.S. Commission on International Religious Freedom, tasked with advising the federal government and Congress on global religious freedom issues, hosted a panel on Wednesday to discuss “extremism and government inaction” in Nigeria.

Hafsat Maina Muhammed, the founder of Choice for Peace, Gender and Development [COPGAD], shared that as an outspoken Muslim woman living in the northeastern region of Nigeria, she faced persecution from both Boko Haram terrorists and the government.

She said she faced persecution because she is a Muslim and a woman, saying “there is a way a Muslim woman should behave act or be in the society.”

She continued that Boko Haram, the Islamic extremist group that has displaced millions and killed thousands in northeast Nigeria in the past several years, “unleashed mayhem” in her local government, state, and on her personally.

She added that a lot of women “are still there because they have nowhere to go.”

“They have nothing to turn to,” Muhammad added. “So in the end, they are stuck where they are. So I am privileged to be out of a situation that I once thought I would never come out alive from.”

The NGO head shared how she has even seen pregnant women cut open and their babies removed from them. She said she has run into the forest to retrieve these babies.

She warned the government in Nigeria lacks both transparency and accountability.

“People in Nigerian government and terrorists and jihadists [want] to inflict pain by forcing people to believe what they believe or act the way they want them to act,” she continued “… The U.S. government needs to focus on the Nigerian government, and I don’t know, educating them perhaps, or bringing them to … [communicate] with their people.”

She argued that the government needs a constitutional review and should separate church and state.

Muhammad believes politicians and state actors allow the situation to remain and even drive conflict in Nigeria because they want the chaos to continue. She called this situation a “time bomb.”

Link to the video if you cannot see it due to the service you’re using. You can open and watch the video by clicking on this link.

Frank Wolf, former U.S. congressman, religious freedom advocate and author of the International Religious Freedom Act of 1998, shared how the U.S. cannot refuse to intervene in the genocide happening in Nigeria.

“When the world and the U.S. ignored … genocide in Rwanda, hundreds of thousands of people died,” Wolf said. “History is repeating itself. Because of the atrocities in Rwanda that we had ignored, President Bill Clinton flew to Rwanda and apologized to the Rwandan people near the end of his term.”

“If what is happening in Nigeria were happening to nearly any country in Europe, the world would be enraged and engaged. But in Nigeria, there is no action,” Wolf continued.

The 82-year-old Wolf said, “we do now know what is taking place in Nigeria, so we can’t pretend that we do not.”

Mike Jobbins, vice president of Global Affairs and Partnerships at Search for Common Ground, said this is a “critical moment” for the U.S. to act.

“We need a whole-of-government response. …,” he said. “There is an enormous opportunity for the administration to think creatively about how we rally the whole of the U.S. government to support this economic frustration, deep security and injustice, things that aren’t necessarily within the human rights toolbox. …”

Around half of Nigeria’s population identifies as Christian. There are over 95 million believers, and the divide between Christians and Muslims is roughly even, according to the global persecution watchdog organization Open Doors. More Christians are killed in Nigeria than in any other country in the world each year, the organization reports.

In addition to Boko Haram and Islamic State extremists terrorizing northeast Nigeria, thousands of Christians have reportedly been killed in farming communities across Nigeria’s Middle Belt in recent years in attacks blamed on radicalized Fulani herders. Activists have claimed that the violence occurring in the Middle Belt has reached the standard for “genocide,” and many have accused the Buhari administration of not protecting its citizens.

The government has claimed that the violence in the Middle Belt has less to do with religion and is due to longstanding ethnic clashes between farmers and herders.

The Global Terrorism Index ranked Nigeria as the third-most affected country by terrorism in 2020. It is reported that over 22,000 people were killed by acts of terror from 2001 to 2019.

The U.S. Commission on International and Religious Freedom’s 2021 annual report warned Nigeria “will move relentlessly toward a Christian genocide” if action is not taken quickly.

Nigeria was the first democratic nation to be added to the U.S. State Department’s list of “countries of particular concern” under the International Religious Freedom Act for engaging in “tolerated systematic, ongoing and egregious violations of religious freedom.”