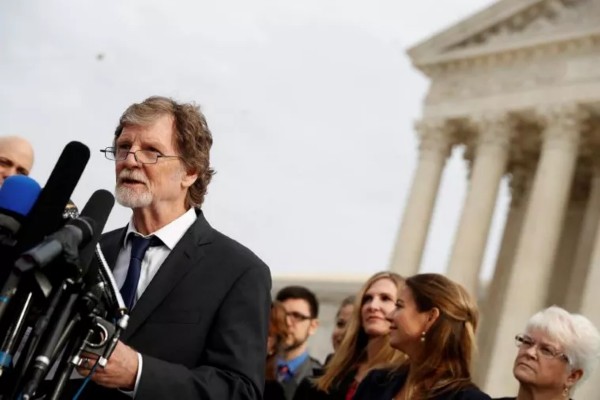 A Christian baker in Colorado who has been at the center of a years-long debate after he declined to make a cake for a same-sex wedding has revealed the intense harassment and “horrific” response he and his business faced amid the fallout.

Phillips, who shares his story in the new book, The Cost of My Faith, said he had to protect his staff and totally take over any and all incoming phone calls to the bakery, as his business was severely impacted by the anger and angst.

And before long, the nasty phone calls morphed into something far more diabolical.

“We had our store vandalized. We had death threats,” he said. “I had a guy call me up one day, said he was in his car, he’s got a gun, he’s on his way to the shop and he’s going to blow my head off … the man kept calling and calling. It was just crazy.”

Listen to Phillips share his story and reveal why he wouldn’t simply “bake the cake” as some implored:

Phillips, who has spent the past nine years amidst legal battles stemming from the refusal, recounted the day two men came into Masterpiece Cakeshop and sought a wedding cake.

“I sat down, I introduced myself … I immediately knew what my answer would be,” he said, noting that he said, “I’m sorry, guys, I don’t do cakes for same-sex weddings.”

The men were purportedly frustrated and left the bakery, with their anger leaving Phillips a bit shocked.

“I was stunned. I tried to be polite,” he said. “I tried to, in that couple of sentences, let them know that I’d be happy to serve them in any other capacity … but this was a cake, because of the message and my faith, that I couldn’t create.”

The baker said his phone started ringing within 20 minutes of the encounter and then emails started streaming in. That quick encounter was soon a national debate, and by October — just three months later — Phillips received notice that he was being sued by Colorado.

“The [Colorado Civil Rights Commission] required me to change my policies, ignore my faith,” Phillips explained. “And when I’m at the cake shop I don’t get to exercise my freedom of religion.”

The baker said he would have had no rights over the design of his cakes and that the incident would force him to report to the commission quarterly for two years as he retrained his staff to meet government standards. Phillips stood his ground and battled the government in court.

“We decided that the way around it was not to create wedding cakes at all,” Phillips said. “We were doing probably 300 wedding cakes every year. But we had to give that up.”

Despite the chaotic problems that followed, Phillips has continued over the past decade to defend his decision. After years of seeing his case volley back and forth in the courts, the Supreme Court reversed Colorado’s punishment in 2018 and offered a victory of sorts.

Phillips still faces the fallout from a separate 2017 instance in which a customer contacted the bakery and asked for a cake to celebrate a gender transition — something Phillips declined. He has since been back in court to battle over that incident.

Despite all of the chaos, though, the baker made one thing clear: he believes God has sustained him throughout the ordeal.

“God’s provided everything we needed all the way through,” he said.

For more powerful and inspiring interviews, be sure to listen to “Edifi With Billy Hallowell.”