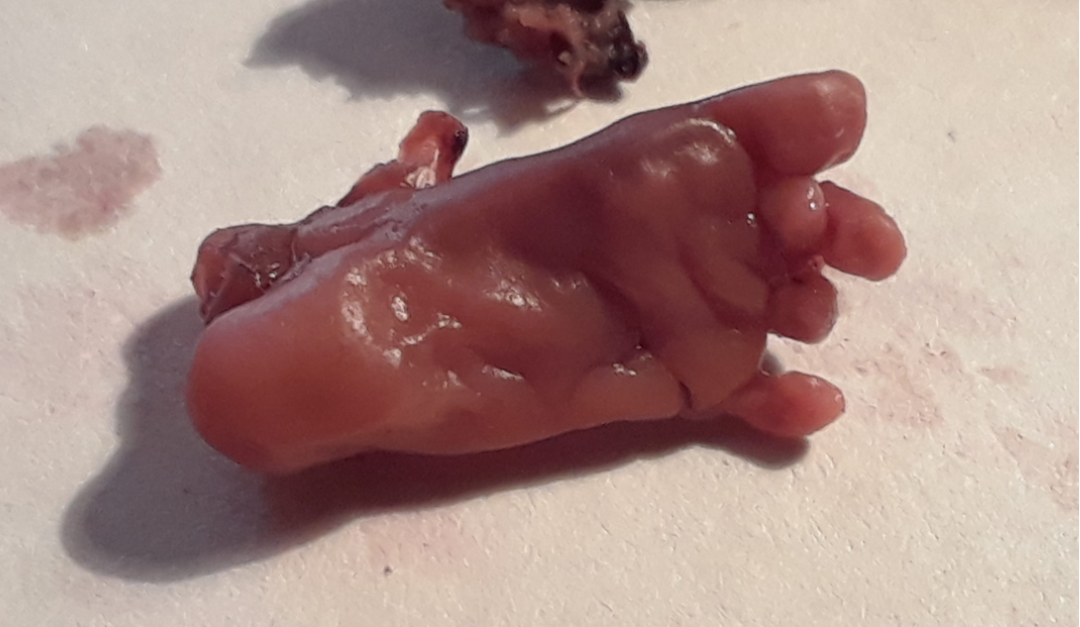 Enough of the lies, the delusion. The permitting evil to have such weight. There is NO LEGITIMATE DEBATE concerning when does life begins, and what is growing within a woman’s womb?

To even enter into such is foolishness and playing into the hands of the Evil One and all his ministers and minions.

Life begins when a living human sperm penetrates a living human egg. The male’s sperm into the female’s egg. And life begins because those two distinct and qualitative things are known to be LIVING when viewed by the human eye accorded the technology permitted to do so by the grace of God to give man the ability, the knowledge, the technology to do so.

And with the penetration of the sperm into the egg HUMAN LIFE GROWS as instant cell division begins and a HUMAN is knitted in the woman’s womb by God.

And the only time a woman has something dead within her is in the very sad instance of miscarriage. Anything else? To remove what is HUMAN, ALIVE, and growing within her? And is called by the world, and is called by those professing to be Christian the euphemism “abortion?” THAT my dear ones is PREMEDITATED MURDER. Nothing short, nothing other than premeditated MURDER.

The taking of a human life. By the mother. By the doctor. By any and all involved in each instance this premeditated MURDER is carried out.

And the LIVING HUMAN MURDERED FEELS THE PAIN. Oh, they feel the pain of being murdered dear ones just read some recent research if hiding from the fact. Do not neglect to think about, know, FEEL THAT within your mind, heart, being, and soul — all those blessed to have come out of their mother’s womb alive to live their lives. Look at the image above. What is that? If not human? If not once alive and murdered with INTENT by the mother, the doctor, and all those involved in such? Enough of being in a stupor, hiding, only words, oh, so many words! Enough! Time to hold the murderers accountable and to stop paying for these murders. Pay our taxes, yes, but not to go against the word of God, to disobey God and God’s word. We did not sign up to be murderers in the paying of our tax dollars. Did we? And do not bring the discussion of waging wars into this — THAT is totally different. Stop deflecting and infecting and corrupting as the minions of Satan may be wont to bring into the discussion— or being part of it by silence.

Let’s stop pretending. Let’s some lying. Let’s stop using euphemisms and acting all wise, intelligent, and above it all. Advanced. For we are the lowest of the low barbarians. Murderers. And we finance this. We have made this lawless immorality and vile sin and evil LAWFUL according to the evil men and women of this world within our government, within our nation since the early 1970s permitting the MURDER of over 63,000,000 human beings.

We lament and scream and march about certain injustices? About the murder of one person? Where is the standing up and refusing to permit the continued, constant, daily murder of millions in our sick, lost, corrupt, and perverse nation?

TAKE TIME TO SEARCH THE RELATED ARTICLES FOLLOWING THE ARTICLE BELOW…

A pro-life group has accused an Ohio abortion facility of throwing a dismembered, aborted baby away in a dumpster.

Ohio Right to Life said Wednesday it found the remains of an aborted baby at about 17 weeks gestation discarded in dumpster behind Ohio Women’s Center (NEOWC) abortion clinic. The clinic, which has not responded to requests for comment from the Daily Caller News Foundation, denied that it improperly disposed of fetal remains.

“Ohio Right to Life is heartbroken and appalled by the abortion industry’s utter disregard for human life,” Mike Gonidakis, president of Ohio Right to Life, said in a statement. “This child suffered doubly at the hands of the abortion industry: first, by being subjected to a brutal death by dismemberment and second by the degradation of his or her broken body being dumped into the trash like garbage.”

The pro-life group Created Equal shared photographs of the purported baby remains on Facebook, claiming the aborted baby was “killed by the dilation and evacuation abortion method” and had been “hidden, wrapped up in a blood-stained blue surgical pad used during the abortion procedure.”

The DCNF is not publishing the photographs due to the graphic content displayed.

“In addition, several discarded prescription vials and urine cups were found that contained intact names of clinic patients, as well as bio-waste—such as other bloody blue surgical papers and soiled suction cannulas used in the abortion procedures,” the group said. “The left leg, left foot, and right hand of the baby was found in the NEOWC dumpster, as well as the name of one clinic abortionist on a prescription.”

The pro-life group suggested that NEOWC could be cited for HIPAA violations for allegedly discarding urine-specimen cups with women’s names on them, as well as various “bloody items” related to the abortion procedures.

Republican Indiana Rep. Jim Banks told the DCNF Thursday that seeing pictures of the aborted baby remains in the trash is “a wake-up call for anyone who suggests that a 17-week-old fetus is ‘a clump of cells.’”

“Thanks to breakthroughs in science, we know that babies at this age feel pain and have a beating heart, just like anyone outside the womb,” the congressman said. “Unborn children deserve to be treated with the same dignity and respect as we’d apply to anyone else.”

Republican Ohio Gov. Mike DeWine signed the Unborn Child Dignity Act into law in December 2020, requiring the Ohio Department of Health to issue rules requiring fetal remains to be either buried or cremated. DeWine formerly investigated Planned Parenthood’s disposal of aborted baby body parts as the state’s attorney general in 2015 but found no evidence that the abortion giant had illegally disposed of the remains.

Neither the Ohio Department of Health nor DeWine immediately responded to requests for comment from the DCNF.

Prolific abortionist Ulrich Klopfer formerly ran three different abortion clinics in neighboring Indiana beginning in 1974 and performed over 30,000 abortions over the course of his life. Family members discovered a collection of 2,246 medically preserved fetal remains in his Illinois home after his death, and authorities from the Will County Sheriff’s Office later discovered additional fetal remains stashed away in the trunk of Klopfer’s car.

A preliminary report on the investigation of Klopfer found that “the 2,246 fetal remains all appeared to be from 2000-2002 and had originated from Dr. Klopfer’s Indiana abortion clinics, as Dr. Klopfer was only practicing in Indiana at that time.”

Right to Life of Northeast Ohio executive director Denise Leipold said in a statement that it is “a tragedy that a woman can legally choose to end the life of her preborn child.”

“It may be legal, but that doesn’t mean it is morally or ethically right,” she said. “The discovery made at this abortion facility only proves the disregard for the sanctity of life, along with a total disregard for the law, and the wellbeing of our community.”

LifeNews Note: Mary Margaret Olohan writes for Daily Caller. Content created by The Daily Caller News Foundation is available without charge to any eligible news publisher that can provide a large audience.

It’s time to get serious about our eternal fate

MPs pushing abortion for any reason up to birth

In New Zealand, an ‘abortion tragedy’ now refers to when parents can’t kill their unborn child earlier in the pregnancy