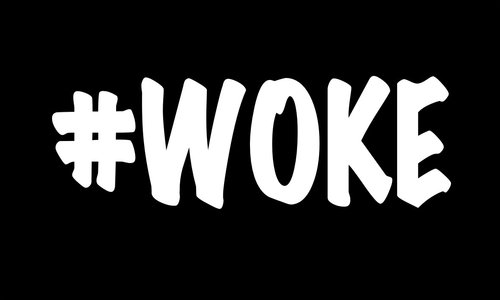 The erroneously named “woke culture,” deluding themselves along with every weak, susceptible, lost, and perverse person along the way with them is one of the newest words, or phrases aptly an oxymoron.

The so-called “woke” are those the deepest in utter darkness. Those in the deepest of stupors. Consumed in the black holes of delusion, tyranny, fascism, lies, and sin. All things evil. Those proclaiming to be the most enlightened among us, and morally superior are in reality in total darkness and some of the most immoral on earth.

Wake up, folks! Wake up, and smell the destruction, see the destruction, taste the bitterness now called sweet taking place all around you in this escalating spiritual war with myriad things occurring simultaneously worldwide THAT HAVE NEVER OCCURRED IN HISTORY BEFORE TO THIS LEVEL, ON A WORLDWIDE BASIS.

In November 1957, towards the beginning of Martin Luther King, Jr.’s leadership of the civil rights movement, he delivered a sermon at the Dexter Avenue Baptist Church in Montgomery, Ala. In describing the biblical importance of loving one’s enemies, he said this:

When you come to the point that you look in the face of every man and see deep down within him what religion calls “the image of God,” you begin to love him in spite of. No matter what he does, you see God’s image there. There is an element of goodness that he can never slough off. Discover the element of good in your enemy. And as you seek to hate him, find the center of goodness and place your attention there and you will take a new attitude.

This profound message of reconciliation, rooted in the gospel, was at the heart of King’s monumental “I Have a Dream” speech in the summer of 1963 that laid down the foundations of what race relations in America should strive for.

Ever since the end of segregation and Jim Crow laws and the signing of the landmark Civil Rights Act of 1964, the road to racial reconciliation and progress for black people in America has steadily improved. In the 50 years since then, black people have seen a 60 percent increase in high school graduation, a 20 percent increase in college graduation, a poverty rate that has been cut in half, a record low unemployment rate, a 1,325 percent increase in members of Congress, a twice elected president and a sitting vice president of the United States, and almost universal agreement among all races on the positive impact of the Civil Rights Act, to name just a few indicators of progress.

To borrow a phrase from an old tag line, “You’ve come a long way, America.”

However, over the last year, views on race in America seem to have gone haywire. The idea of “wokeness” — believing that America is, as we speak, a “systemically racist” country — has steadily pervaded almost every corner of American public life, from academia to corporations to the mainstream media.

Even professional sports have succumbed, much to the dismay of fans. Perhaps even more concerning are signs that “wokeness” is now hijacking the gospel and is creeping its way into churches across America.

Owen Strachan, Senior Fellow at FRC’s Center for Biblical Worldview, joined “Washington Watch” to discuss his latest book Christianity and Wokeness: How the Social Justice Movement is Hijacking the Gospel — and the Way to Stop It. He related examples of what is happening in our culture.

“When you are told that white people are ‘white supremacists,’ you are hearing wokeness talking,” Strachan said. “When you had, for example, a LinkedIn training session some time ago that asserted that white people should try to be less white, that was woke teaching.

When you hear people say that white people have ‘white privilege,’ that’s wokeness. When you hear a critique of ‘heteronormative capitalist sexist white oppression’ in any form, you are hearing wokeness talking.”

As Strachan went on to observe, what has become clear from this movement is the central role that guilt plays in advancing its cause.

“Guilt is absolutely the currency of wokeness,” he underscored. “It really is targeting white people. It wants white people to feel tremendous guilt for past evils. And those are real evils, things like slavery and Jim Crow law, things that no person in their sane mind is going to support. But wokeness says the past is not the past.

Basically, the crimes of yesterday burn today. You can smell them in the air … we need to impute guilt to white people today because their whiteness implicates them in this whole systemic order of racism. And if we can successfully make them feel guilty, then we will advance our ideas and we will succeed in flipping the culture, which is really what this movement is about.

It’s not about promoting true unity in the gospel of Jesus Christ … it’s about making predominantly white people feel guilty for being white and then mobilizing that guilt to leftist social ends.”

Strachan made it clear that the leftist tactics being used by the woke movement fly in the face of any semblance of a diverse, civilized society, and that the gospel is the only way out of the mess we’re in.