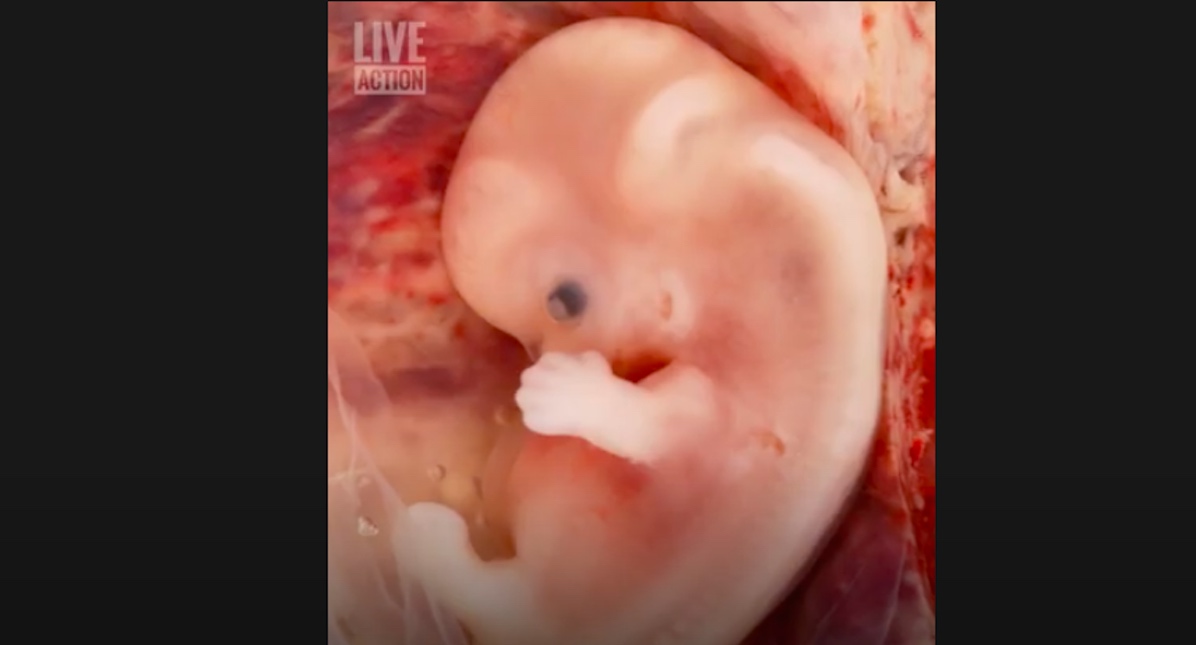 Most pro-lifers won’t go more than a month or two without hearing this stubborn phrase. Pro-choicers often chant it as a one-liner to shoot down a pro-lifer’s honest argument or just to express their unyielding abortion support. In cases where they actually believe it and are willing to discuss with you, it’s important to have a few handy points up your sleeve to get them really listening.

Despite this phrase being both inaccurate and usually thrown about only to deceive or provoke anger, in a culture where ‘”repeating something enough makes it true,” it has become a widely-held “fact” among the public. However, there is much to rebut against this argument, and that’s why it gets so tough. Where do we even start?

Well, to begin with, I often like to point out that every human alive right now, including both the pro-choicer and the pro-lifer, are also clumps of cells (or clusters of cells, blobs of tissue, etc.). This can prompt the opposition to get more specific as to the differences they are trying to highlight between the born and the unborn that they believe justify abortion. Two different paths can be taken from there, depending on their argument. The first is more scientific, and the second more philosophical. Ordinarily, they will both be touched upon at some point, in the respective order.

The first argument is that while all humans are technically “clumps of cells,” what they mean is that early embryos or zygotes mostly consist of cells containing genetic information that are blueprints for any and all of their future body parts, called “(embryonic) stem cells,” whereas older fetuses and born human bodies are more organized into groups of like cells, such as skin, organs, hair, etc. However, even in the earliest stages of fetal development (such as the blastocyst – a child around the age they implant in their mother’s uterus 3-5 days after fertilization), she is organized into parts, with her inner cells making up her body and the outer ones developing into her nourishing placenta. A bit later, when the child is 2-3 weeks old in the womb as an embryo, she has three layers of cells in her tiny body: The top layer (ectoderm) which gives rise to her outermost layer of skin, central and peripheral nervous systems, eyes, and inner ears; the middle layer of cells (mesoderm), from which her heart, primitive circulatory system, bones, ligaments, kidneys and much of her reproductive system will form; and the inner layer of cells (endoderm) where the child’s lungs and intestines will develop. By week 7-8, all of the fetus’s major organs/parts (heart, brain, spine, limbs) are fully formed and mostly functional.

Some may object that while fetuses are not always clumps of cells, abortions take place so early in the pregnancy at which time they are not developed enough to be considered a “child.” Countless embryology textbooks and medical professionals have confirmed the fetal development research outlined above. With that information in mind, let us take a look at further studies regarding the development of the fetus when most abortions are performed. Most mothers find out they are pregnant when they are between 4 and 7 weeks along – on average, around 5 and a half weeks. The earliest almost any abortion (chemical or surgical) can be performed is after 4 weeks gestation, when the child already has a detectible heartbeat. Although a majority of abortions are done in the first trimester of pregnancy, the child at that stage is already developing to a much greater extent than those who call him or her a “clump of cells” would like you to think, or even believe themselves. Moreover, abortions in the second and even third trimester are legal in the United States, happen tens of thousands of times a year, and are routinely committed for non-medical reasons.

Finally, there is the philosophical argument for abortion: using the phrase “clump of cells” to imply that the unborn are not “fully human,” nor worthy enough to be called human beings nor a member of humanity. It’s hard to argue with the science that proves fetuses are living human organisms, so some will take it a step further and admit they are, but still insist the unborn should not be treated as valuable “persons” like born humans are, because (1) they aren’t as developed, (2) they are much smaller in size, and (3) they are more dependent upon others — especially their own mother — for survival. Your job is to get to the root of why they think these things matter so much that they determine which humans are “persons” who have human rights. When you look closely enough, you’ll see that all these “requirements” are arbitrary and nonsensical, just as saying that a human’s biological sex, skin color, or abilities (mental, physical, etc.) determine whether he or she has basic human rights.

When we base human rights such as the right to life on anything other than someone’s actual humanity, we are in for a lot of trouble. Talk about being on the right side of history for this one!

When Does Life Begin?

Key facts about the abortion debate in America