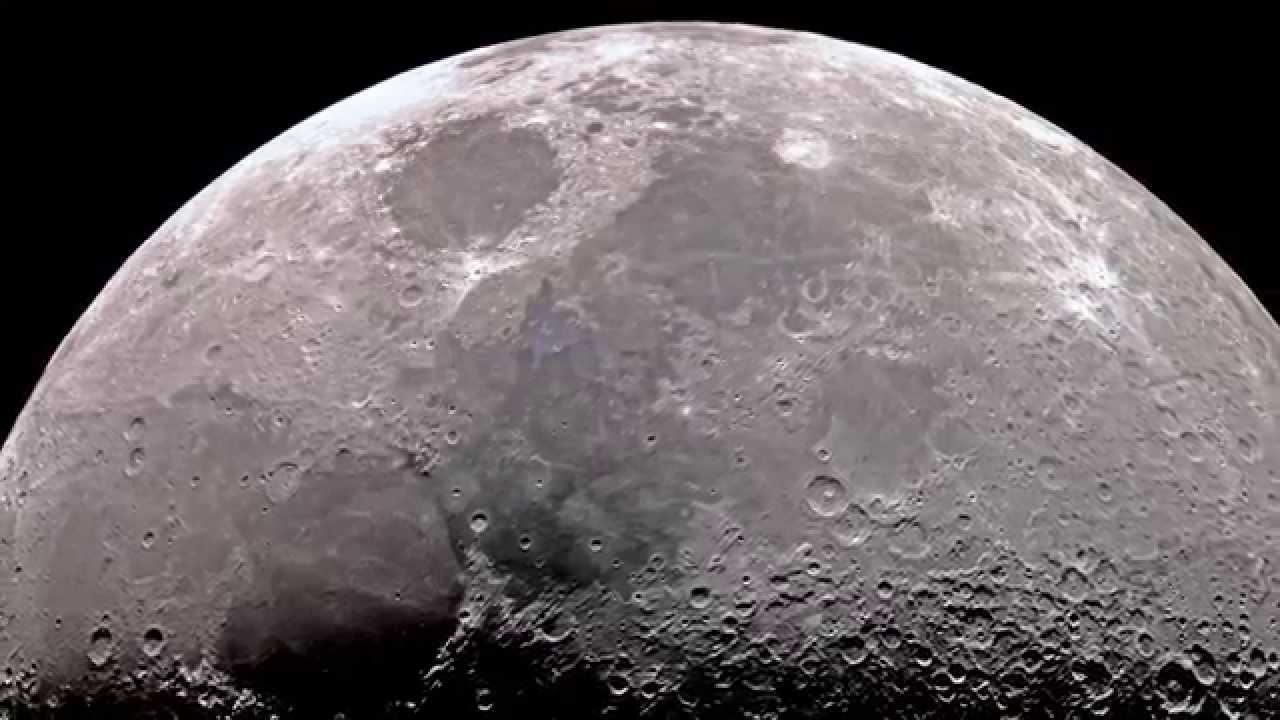 The Coming of the Son of Man

“And there will be signs in sun and moon and stars, and on the earth distress of nations in perplexity because of the roaring of the sea and the waves, people fainting with fear and with foreboding of what is coming on the world. For the powers of the heavens will be shaken. And then they will see the Son of Man coming in a cloud with power and great glory. Now when these things begin to take place, straighten up and raise your heads, because your redemption is drawing near.”

No one knows the time the Lord will return a second time, now more time. But He is coming back. And no one knows when their final breath, their last heartbeat will be. But each person can come to know the word of God. Come to see and understand some of the signs of the times. Hear the calling of the Lord and respond. No longer remaining in darkness, no longer rebelling, no longer denying.

Why wait since there is no assurance of having animated physical life tomorrow, some years from now but each person can have the assurance of eternal life in having faith in the Lord Jesus Christ, in the confessing of sin, in true repentance, in obedience to God, to Jesus, to the Holy Spirit, to the word of God.

The world can see the signs, can predict what might or will happen. And they ascribe every wrong or only part-way notion and explanation to everything. Never speaking or writing of the will of God, of man and woman’s sin bringing all this about, of the Sovereignty of God, of the Lord Jesus Christ, His life and death and resurrection and how a person can only have life, real life, eternal life through being a faithful and obedience disciple of the Lord.

It’s all distractions, otherwise, misleading, only 10% here, 20% thereof anything. Because they don’t know…

Do not be concerned about being different, being peculiar, being a pilgrim, a disciple of the Lord’s above all other things.

Be peculiar. Be odd. Be different. In a godly, of the word of God, as a disciple of Jesus way. Not the world’s ways.

And know there are going to be signs and wonders in the heavens, in the moon, sun, and stars. And also know that God ordains everything. God is the power. Above all. Over all. It is about God here. Not about us. It’s about God. And how each person responds to God, to Jesus, to the Holy Spirit, to the word of God.

Wobble on you crazy diamond that God our Father created by His mere will, His saying, “Let there be…”

And let there be many who are firm and bold and sincere in the faith. Growing in the faith. Putting on the whole armour of God. Prepared. Ready. And able to speak the truth to others.

While there still is time. 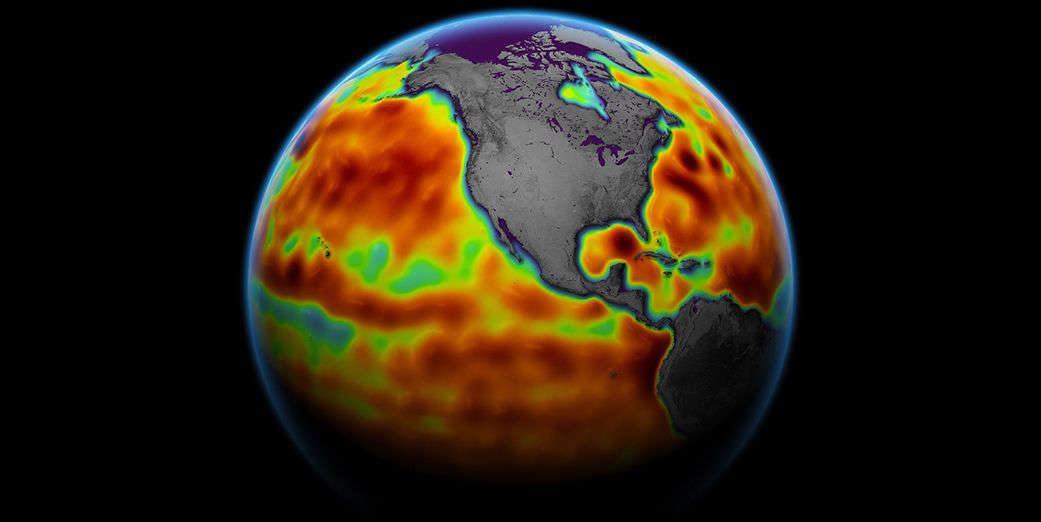 © NASA/Earth Observatory High tides will get even higher as the sea level rises due to climate change. The moon’s 18.6-year “wobble” will also affect the rising tides.

Thanks to rising sea levels and a wobble in the moon’s orbit, the 2030s will be marked by a record number of high-tide floods around the coastal United States, scientists warn in a new paper.

So-called “nuisance floods” occur when tides rise between 1.75 and 2 feet above the daily average high tide, according to the U.S. National Oceanic and Atmospheric Administration (NOAA). These kinds of floods may not be as extreme as those caused by hurricanes or other natural disasters, but they can still cause water to back up into basements and gurgle from sewage drains.

NOAA reports that more than 600 nuisance floods occurred in the U.S. in 2019, and between May 2020 and April 2021, coastal communities saw twice as many high tide flooding days than they did 20 years ago. But new NASA-led research—published last month in the journal Nature Climate Change—suggests the trend will only grow more dramatic in the 2030s.

Expect to see three to four times more high-tide flood days than at present, all concentrated in the space of a few months of activity each year. Floods may even occur in clusters that last a month or longer, leaving cities along the east and west coasts to deal with floods every day or two, according to NASA.

“It’s the accumulated effect over time that will have an impact,” lead study author Phil Thompson, an assistant professor at the University of Hawaii, says in a NASA press release. “If it floods 10 or 15 times a month, a business can’t keep operating with its parking lot under water. People lose their jobs because they can’t get to work. Seeping cesspools become a public health issue.”

Climate change, and the rising sea levels that come along with it, is only partly to blame. In fact, the main factor is a “wobble” in the moon’s orbit that regularly occurs every 18.6 years. The wobble isn’t new (it was first reported in 1728, according to NASA), but combined with the effects of climate change, it will create an unprecedented series of high-tide flooding. 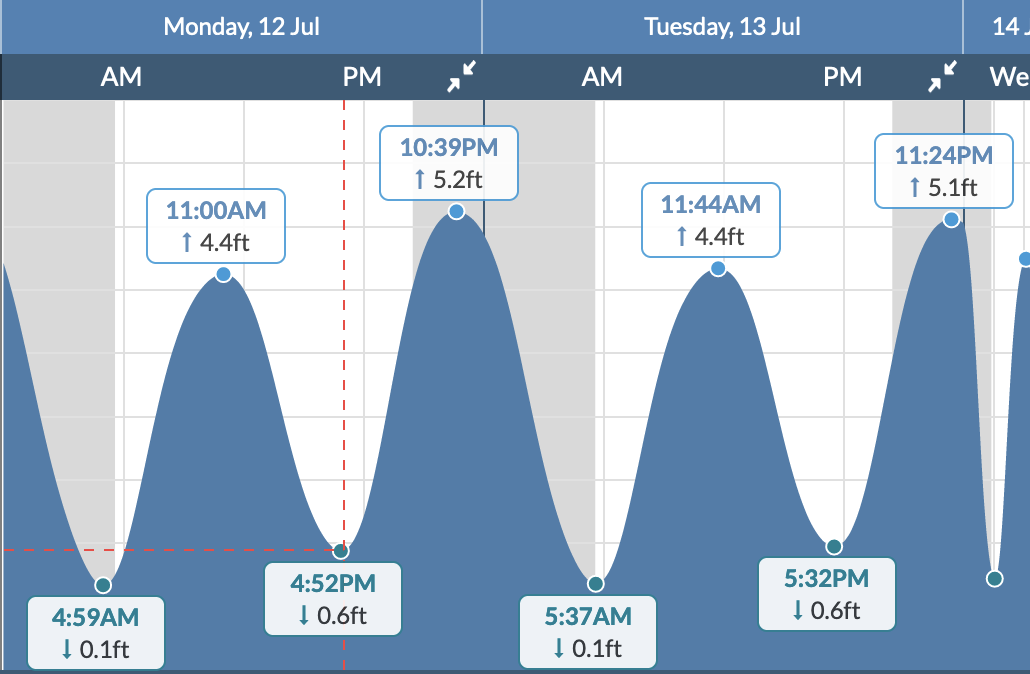 To understand the significance of this wobble, let’s first unpack the moon’s relationship with the ocean’s tides. The moon physically pulls on the oceans via gravity (for that reason, the sun also affects the tides, although less noticeably), causing high and low tides. High tide, when the ocean’s fluctuating level is at its most elevated, can already cause problems in coastal towns. It can cause backflow in rivers that empty into the ocean, for example—just check out the daily tide forecast for New York City.

A couple of times each month, high tides are made even higher by the combined factors from Earth, the sun, and the moon. These are called spring tides, and they also mean lower low tides—more extremes in both directions. But spring tides are just one way the high tide varies over time, NASA explains.

Let’s return to that moon wobble. The moon suppresses tides on Earth for half of the 18.6-year cycle, meaning high tides are lower than normal, and low tides are higher than normal. But during the other half of the time, the tides are amplified. We’re in the latter period of the moon’s cycle at the moment, but the sea level hasn’t risen enough yet from climate change for the effect to be compounded—yet.

Here’s an extremely professional illustration of how that effect “stacks” with the overall sea level during high tides: 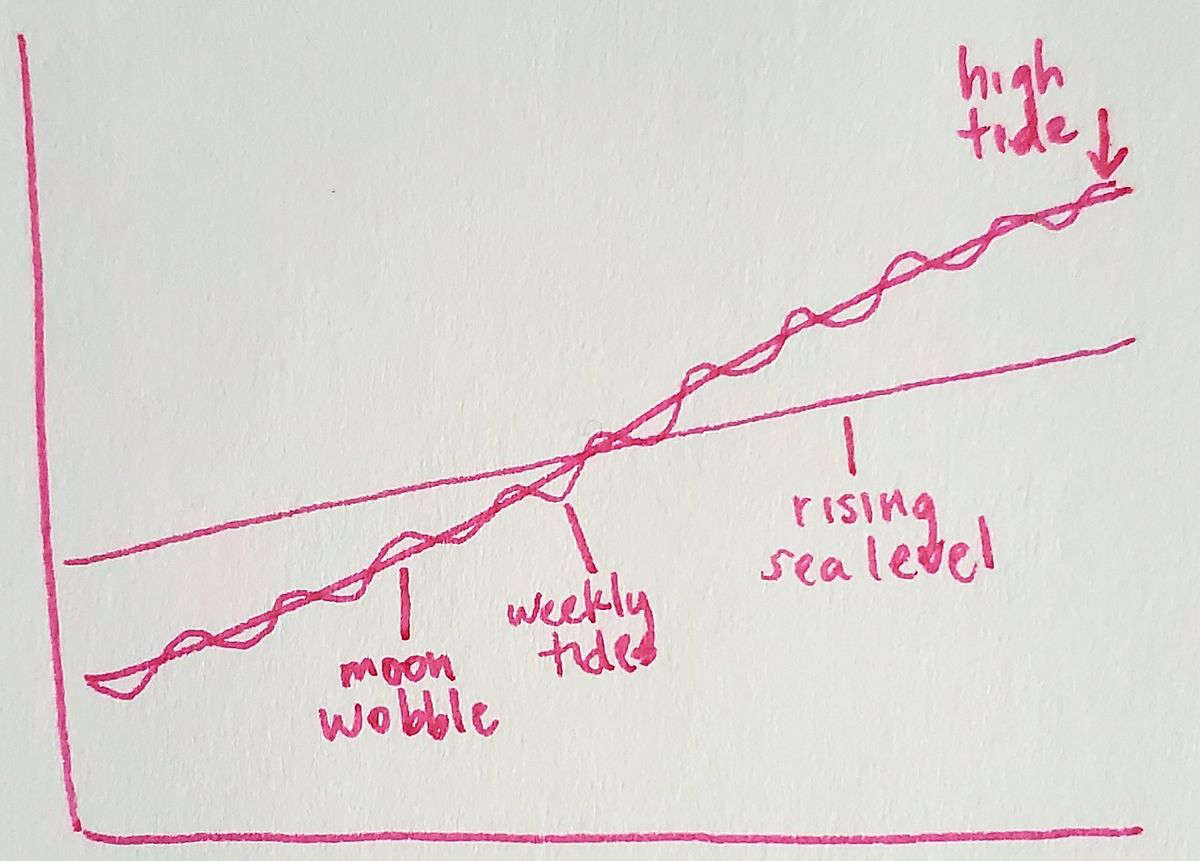 The next time we’re on the amplified side of this moon cycle, however, the combined higher sea levels and rising tides will cause a record number of nuisance floods along all of the mainland coastlines in the U.S., as well as in Hawaii and Guam. 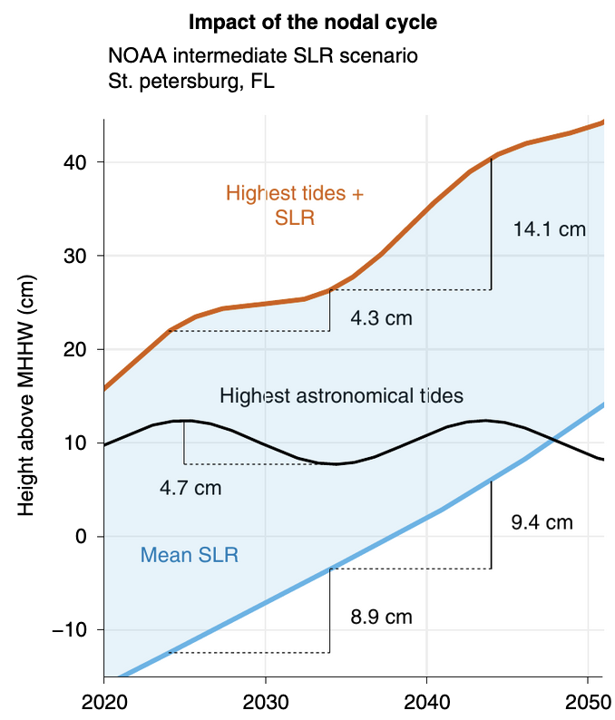 © NASA A diagram shows the combined effect of sea level rise and the moon’s “wobble” on tides in St. Petersburg, Florida.

By 2030, the sea level will have risen by an estimated minimum of 1.4 inches, according to the Royal Society, the U.K.’s national academy of sciences. By 2039, that number will be more like 2.7 inches minimum. That, combined with the wobble effect, could leave beach communities at odds with nature, necessitating some serious infrastructure changes. Let’s hope stakeholders will take this new report seriously.