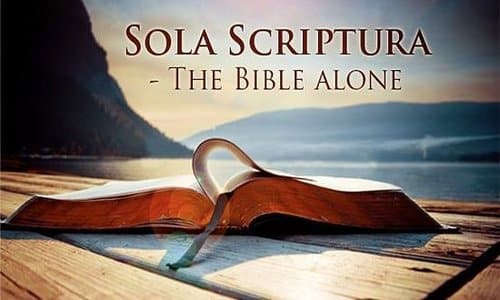 Sola scriptura is the first of the five sola doctrines rediscovered in the great Protestant Reformation of the sixteenth century. We need to be vigilant in holding to this precious truth in light of ongoing challenges.

Many Roman Catholics and liberals have argued that the Bible itself does not teach sola scriptura. But 2 Timothy 3:16-17  says that all Scripture is inspired by God. Being the word of God, it has the authority of God himself. Our Lord Jesus regularly appealed to Scripture as the highest authority with the words “It is written” (such as in Matthew 4:1-12). Paul urged his readers “not to go beyond what is written” (1 Corinthians 4:6) and said in Romans 4:3, “What does the Scripture say?” The noble Bereans were commended for testing even the apostle’s preaching by Holy Scripture (Acts 17:11). First Thessalonians 5:21 tells us to “test all things,” and 1 John 4:1 says, “Test the spirits.” By what standard? “To the law and to the testimony! If they do not speak according to this word, it is because there is no light in them” (Isaiah 8:20).

There are several false authorities that people have appealed to instead of, or in addition to, the Bible.

Some Areas in Which We Must Apply Sola Scriptura

There are several areas in which we must apply Sola Scriptura.

Sola scriptura is a foundational and precious truth. it is not simply a badge of Reformed orthodoxy, it is the revealed wisdom of God to shape, style and direct all of life.

Sola Scriptura, however, does not mean that we are to neglect the history and tradition of the church. John Calvin quotes Augustine 403 times in his Institutes of the Christian Religion, and in the chapter in the Westminister Confession of Faith on “Of God and the Holy Trinity” simply echoes the teaching of the great Concil of Chalcedon (AD 451). What sola scriptura does say is that, “The Supreme Judge, by which all controversies of religion are to be determined, and all decrees of councils, opinions of ancient writers, doctrines of men, and private spirits, are to be examined, and in whose sentence we are to rest, can be no other but the Holy Spirit speaking in the Scripture (Westminster Confession of Faith I.x).

All Scripture is breathed out by God and profitable for teaching, for reproof, for correction, and for training in righteousness, that the man of God may be complete, equipped for every good work.

The Temptation of Jesus

Then Jesus was led up by the Spirit into the wilderness to be tempted by the devil. And after fasting forty days and forty nights, he was hungry. And the tempter came and said to him, “If you are the Son of God, command these stones to become loaves of bread.” But he answered, “It is written, “‘Man shall not live by bread alone, but by every word that comes from the mouth of God.’”

Then the devil took him to the holy city and set him on the pinnacle of the temple and said to him, “If you are the Son of God, throw yourself down, for it is written, “‘He will command his angels concerning you,’ and “‘On their hands they will bear you up, lest you strike your foot against a stone.’”

Then the devil left him, and behold, angels came and were ministering to him.

Now when he heard that John had been arrested, he withdrew into Galilee.

I have applied all these things to myself and Apollos for your benefit, brothers, that you may learn by us not to go beyond what is written, that none of you may be puffed up in favor of one against another.

For what does the Scripture say? “Abraham believed God, and it was counted to him as righteousness.”

Now these Jews were more noble than those in Thessalonica; they received the word with all eagerness, examining the Scriptures daily to see if these things were so.

but test everything; hold fast what is good.

Beloved, do not believe every spirit, but test the spirits to see whether they are from God, for many false prophets have gone out into the world.

To the law and to the testimony: if they speak not according to this word, it is because there is no light in them.

Then Pharisees and scribes came to Jesus from Jerusalem and said, “Why do your disciples break the tradition of the elders? For they do not wash their hands when they eat.” He answered them, “And why do you break the commandment of God for the sake of your tradition? For God commanded, ‘Honor your father and your mother,’ and, ‘Whoever reviles father or mother must surely die.’ But you say, ‘If anyone tells his father or his mother, “What you would have gained from me is given to God,” he need not honor his father.’ So for the sake of your tradition you have made void the word of God. You hypocrites! Well did Isaiah prophesy of you, when he said:

“‘This people honors me with their lips, but their heart is far from me; in vain do they worship me,
teaching as doctrines the commandments of men.’”

Build Your House on the Rock

The Authority of Jesus

And when Jesus finished these sayings, the crowds were astonished at his teaching, for he was teaching them as one who had authority, and not as their scribes.

built on the foundation of the apostles and prophets, Christ Jesus himself being the cornerstone,

If anyone thinks that he is a prophet, or spiritual, he should acknowledge that the things I am writing to you are a command of the Lord.

Your word is a lamp to my feet and a light to my path.

These have indeed an appearance of wisdom in promoting self-made religion and asceticism and severity to the body, but they are of no value in stopping the indulgence of the flesh.

preach the word; be ready in season and out of season; reprove, rebuke, and exhort, with complete patience and teaching.

As we have said before, so now I say again: If anyone is preaching to you a gospel contrary to the one you received, let him be accursed.

Testifying both to the Jews, and also to the Greeks, repentance toward God, and faith toward our Lord Jesus Christ.

So faith comes from hearing, and hearing through the word of Christ.

The saying is trustworthy: If anyone aspires to the office of overseer, he desires a noble task. Therefore an overseer must be above reproach, the husband of one wife, sober-minded, self-controlled, respectable, hospitable, able to teach, not a drunkard, not violent but gentle, not quarrelsome, not a lover of money. He must manage his own household well, with all dignity keeping his children submissive, for if someone does not know how to manage his own household, how will he care for God’s church? He must not be a recent convert, or he may become puffed up with conceit and fall into the condemnation of the devil. Moreover, he must be well thought of by outsiders, so that he may not fall into disgrace, into a snare of the devil.

Deacons likewise must be dignified, not double-tongued, not addicted to much wine, not greedy for dishonest gain. They must hold the mystery of the faith with a clear conscience. And let them also be tested first; then let them serve as deacons if they prove themselves blameless. Their wives likewise must be dignified, not slanderers, but sober-minded, faithful in all things. Let deacons each be the husband of one wife, managing their children and their own households well. For those who serve well as deacons gain a good standing for themselves and also great confidence in the faith that is in Christ Jesus.

1 Timothy 2 — English Standard Version
There is one lawgiver and judge who is able to save and to destroy. But who are you to judge your neighbor?
James 4:12 — Christian Standard Bible

And they cast lots for them, and the lot fell on Matthias, and he was numbered with the eleven apostles.