Giving the Taliban International Legitimacy Would Be a Disastrous Mistake 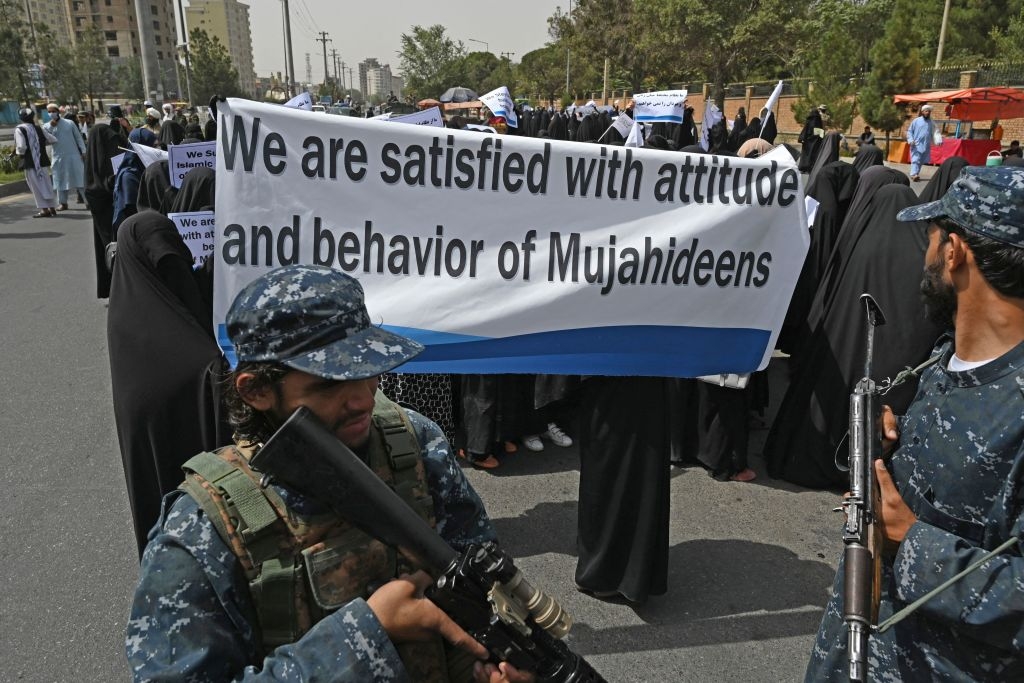 If the message on the banner in the photo above were intended for those present in Afghanistan it would have been written in Arabic. It is in English because it is a propaganda piece pure and plain for any willing to think or see the truth. An armed Taliban fighters escort veiled women as they march during a pro-Taliban rally outside the Shaheed Rabbani Education University in Kabul on September 11, 2021. (Photo by Aamir QURESHI / AFP) (Photo by AAMIR QURESHI/AFP via Getty Images)

Giving the Taliban International Legitimacy Would Be a Disastrous Mistake

Naïve attempts by a number of leading Western powers to foster relations with the newly-installed Taliban regime in Kabul are being undermined by the uncompromising attitude the new Islamist regime.

Following the Taliban’s dramatic seizure of control of Afghanistan last month, a number of prominent Western leaders have indicated their willingness to work with the new Afghan regime, following claims by some Taliban leaders that they want to establish a more moderate form of government than the former Taliban regime that terrorised the country in the late 1990s.

In the aftermath of the Islamist movement’s takeover of the country, Taliban leaders were at pains to stress their plans to establish a more moderate approach. In their first press conference after seizing control of the country, the movement’s leaders promised to protect women’s rights, guarantee media freedom, and offered a nationwide amnesty for government officials and military personnel in the former government of President Ashraf Ghani, which collapsed in disarray following U.S. President Joe Biden’s decision to end U.S. military support.

Zabihullah Mujahid, the armed group’s spokesman, also said the Taliban wished for peaceful relations with other countries, and that no group will be allowed to use Afghan territory for attacks against any nation.

“I would like to assure the international community, including the United States, that nobody will be harmed,” Mujahid said. “We don’t want any internal or external enemies.”

The more moderate tone adopted by Taliban leaders has prompted a number of prominent Western leaders to indicate their willingness to work with the newly-established Islamic Emirate of Afghanistan, prompting fears that the Taliban will soon achieve their goal of winning international acceptance from the world’s major powers.

While Mr. Biden has been ambivalent on the issue of recognising the new Islamist regime, saying it was up to the Taliban to decide whether it wanted international recognition, some of Washington’s key allies have demonstrated more enthusiasm for establishing relations with the new regime in Kabul.

Now the movement’s prospects of gaining wider international acknowledgement have improved considerably after a number of prominent European politicians have signalled their willingness to work with the new regime.

At a news briefing held in the aftermath of the Taliban’s takeover of Afghanistan, Josep Borrell, the European Union’s top diplomat, said the bloc was ready to give serious consideration to establishing relations with the Islamic Emirate. “The Taliban have won the war, so we will have to talk with them,” he declared. “It’s not a matter of official recognition. It’s a matter of dealing with (them).”

The EU’s apparent enthusiasm for establishing relations with the Taliban was echoed in Germany, where Armin Laschet, the candidate from Angela Merkel’s Christian Democratic Union who hopes to succeed her as chancellor, noted that “the art of good foreign policy” is finding solutions with states whose goals and ideals other societies reject.

By contrast, France and Britain have been more ambivalent about establishing ties with the Taliban, with a spokesman for the French foreign ministry saying the issue of recognizing the Taliban “is not currently of relevance for France,” while British Prime Minister Boris Johnson has warned that “it would be a mistake for any country to recognize any new regime in Kabul prematurely or bilaterally.”

Nevertheless, the close cooperation that took place between the Taliban and Western forces at Kabul airport during the recent evacuation of foreign nationals means that a number of senior European politicians still maintain the view that it may soon be possible to provide the new regime with official recognition.

European plans to forge closer ties with Kabul are, though, being severely undermined by the conduct of the new Taliban regime which, rather than living up to its promise to mend its ways, instead appears to be reverting to its old, uncompromising approach.

Having appointed a number of prominent militants to senior positions in the new Taliban administration, the Taliban has now been accused of sending death squads to capture and kill former members of the Afghan security forces.

Recent reports claim that at least four elite Afghan counterterrorism agents have been hunted down and killed by the Taliban during the past three weeks, in one case pulling out all the victim’s fingernails before shooting him.

The victims are said to have been members of Units 011 and 041, British and American-trained units that were responsible for finding and interrogating the Taliban, and had formerly been based at the headquarters of the Afghan intelligence service, the National Directorate for Security (NDS) in Kabul.

Writing in the London Sunday Times, Mr. McMaster issued a stark warning to Western leaders not to be taken in by the Taliban’s claims that they are a more moderate movement than their forebears.

“We have to stop pretending that the Taliban have changed,” warned Mr. McMaster. “Our self-delusion has led many to embrace an Orwellian reversal of morality in which they view jihadist terrorists as a partner.

“We know who they are, how they are recruited and why they are dangerous. The Taliban are determined to impose a brutal form of sharia on the Afghan people and are intertwined with terrorists determined to continue their jihad against all who do not conform to their perverted interpretation of Islam.”

Certainly, to judge by the Taliban’s increasingly uncompromising behaviour since seizing power last month, there is little evidence to suggest that the Islamist militants are prepared to adopt a more conciliatory approach to governing the Afghan people, an attitude that must be taken into account before European leaders make the disastrous mistake of providing Afghanistan’s new Islamist regime with international legitimacy.

Con Coughlin is the Telegraph‘s Defence and Foreign Affairs Editor and a Distinguished Senior Fellow at Gatestone Institute.