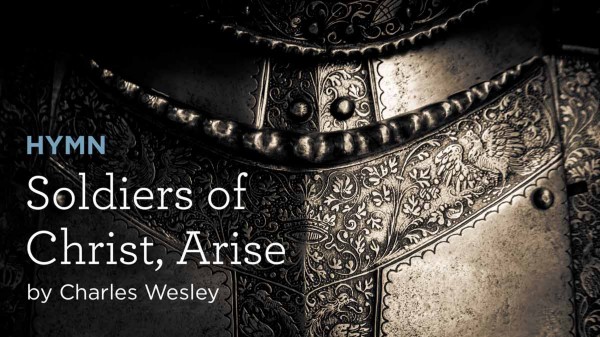 Stand then in his great might,
With all his strength endued;
But take, to arm you for the fight,
The panoply of God.
Leave no unguarded place,
No weakness of the soul;
Take ev’ry virtue, ev’ry grace,
And fortify the whole.

To keep your armor bright,
Attend with constant care;
Still walking in your Captain’s sight,
And watching unto prayer.
From strength to strength go on;
Wrestle and fight and pray;
Tread all the pow’rs of darkness down,
And win the well-fought day.

Charles Wesley, M.A. was the great hymn-writer of the Wesley family, perhaps, taking quantity and quality into consideration, the great hymn-writer of all ages. Charles Wesley was the youngest son and 18th child of Samuel and Susanna Wesley and was born at Epworth Rectory, Dec. 18, 1707. In 1716 he went to Westminster School, being provided with a home and board by his elder brother Samuel, then usher at the school, until 1721, when he was elected King’s Scholar, and as such received his board and education free. In 1726 Charles Wesley was elected to a Westminster studentship at Christ Church, Oxford, where he took his degree in 1729 and became a college tutor. In the early part of the same year, his religious impressions were much deepened, and he became one of the first band of “Oxford Methodists.”

In 1735 he went with his brother John to Georgia, as secretary to General Oglethorpe, having before he set out received Deacon’s and Priest’s Orders on two successive Sundays. His stay in Georgia was very short; he returned to England in 1736, and in 1737 came under the influence of Count Zinzendorf and the Moravians, especially of that remarkable man who had so large a share in moulding John Wesley’s career, Peter Bonier, and also of a Mr. Bray, a brazier in Little Britain. On Whitsunday, 1737, [sic. 1738] he “found rest to his soul,” and in 1738 he became curate to his friend, Mr. Stonehouse, Vicar of Islington, but the opposition of the churchwardens was so great that the Vicar consented that he “should preach in his church no more.” Henceforth his work was identified with that of his brother John, and he became an indefatigable itinerant and field preacher. On April 8, 1749, he married Miss Sarah Gwynne. His marriage, unlike that of his brother John, was a most happy one; his wife was accustomed to accompany him on his evangelistic journeys, which were as frequent as ever until the year 1756,” when he ceased to itinerate and mainly devoted himself to the care of the Societies in London and Bristol. Bristol was his headquarters until 1771 when he removed with his family to London, and, besides attending to the Societies, devoted himself much, as he had done in his youth, to the spiritual care of prisoners in Newgate. He had long been troubled about the relations of Methodism to the Church of England, and strongly disapproved of his brother John’s “ordinations.” Wesley-like, he expressed his disapproval in the most outspoken fashion, but, as in the case of Samuel at an earlier period, the differences between the brothers never led to a breach of friendship. He died in London, March 29, 1788, and was buried in Marylebone churchyard. His brother John was deeply grieved because he would not consent to be interred in the burial-ground of the City Road Chapel, where he had prepared a grave for himself, but Charles said, “I have lived, and I die, in the Communion of the Church of England, and I will be buried in the yard of my parish church.” Eight clergymen of the Church of England bore his pall. He had a large family, four of whom survived him; three sons, who all became distinguished in the musical world, and one daughter, who inherited some of her father’s poetical genius. The widow and orphans were treated with the greatest kindness and generosity by John Wesley.

As a hymn-writer Charles Wesley was unique. He is said to have written no less than 6500 hymns, and though, of course, in so vast a number some are of unequal merit, it is perfectly marvelous how many there are which rise to the highest degree of excellence. His feelings on every occasion of importance, whether private or public, found their best expression in a hymn. His own conversion, his own marriage, the earthquake panic, the rumours of an invasion from France, the defeat of Prince Charles Edward at Culloden, the Gordon riots, every Festival of the Christian Church, every doctrine of the Christian Faith, striking scenes in Scripture history, striking scenes which came within his own view, the deaths of friends as they passed away, one by one, before him, all furnished occasions for the exercise of his divine gift. Nor must we forget his hymns for little children, a branch of sacred poetry in which the mantle of Dr. Watts seems to have fallen upon him. It would be simply impossible within our space to enumerate even those of the hymns which have become really classical. The saying that a really good hymn is as rare an appearance as that of a comet is falsified by the work of Charles Wesley; for hymns, which are really good in every respect, flowed from his pen in quick succession, and death alone stopped the course of the perennial stream.

It has been the common practice, however for a hundred years or more to ascribe all translations from the German to John Wesley, as he only of the two brothers knew that language; and to assign to Charles Wesley all the original hymns except such as are traceable to John Wesley through his Journals and other works.

The list of 482 original hymns by John and Charles Wesley listed in this Dictionary of Hymnology have formed an important part of Methodist hymnody and show the enormous influence of the Wesleys on the English hymnody of the nineteenth century.

Charles Wesley, the son of Samuel Wesley, was born at Epworth, Dec. 18, 1707. He was educated at Westminster School and afterward at Christ Church, Oxford, where he graduated M.A. In 1735, he took Orders and immediately proceeded with his brother John to Georgia, both being employed as missionaries of the S.P.G. He returned to England in 1736. For many years he engaged with his brother in preaching the Gospel. He died on March 29, 1788. To Charles Wesley has been justly assigned the appellation of the “Bard of Methodism.” His prominence in hymn writing may be judged from the fact that in the “Wesleyan Hymn Book,” 623 of the 770 hymns were written by him; and he published more than thirty poetical works, written either by himself alone or in conjunction with his brother. The number of his separate hymns is at least five thousand.

Listen to the Sermon “The Helmet of Salvation — Part One”