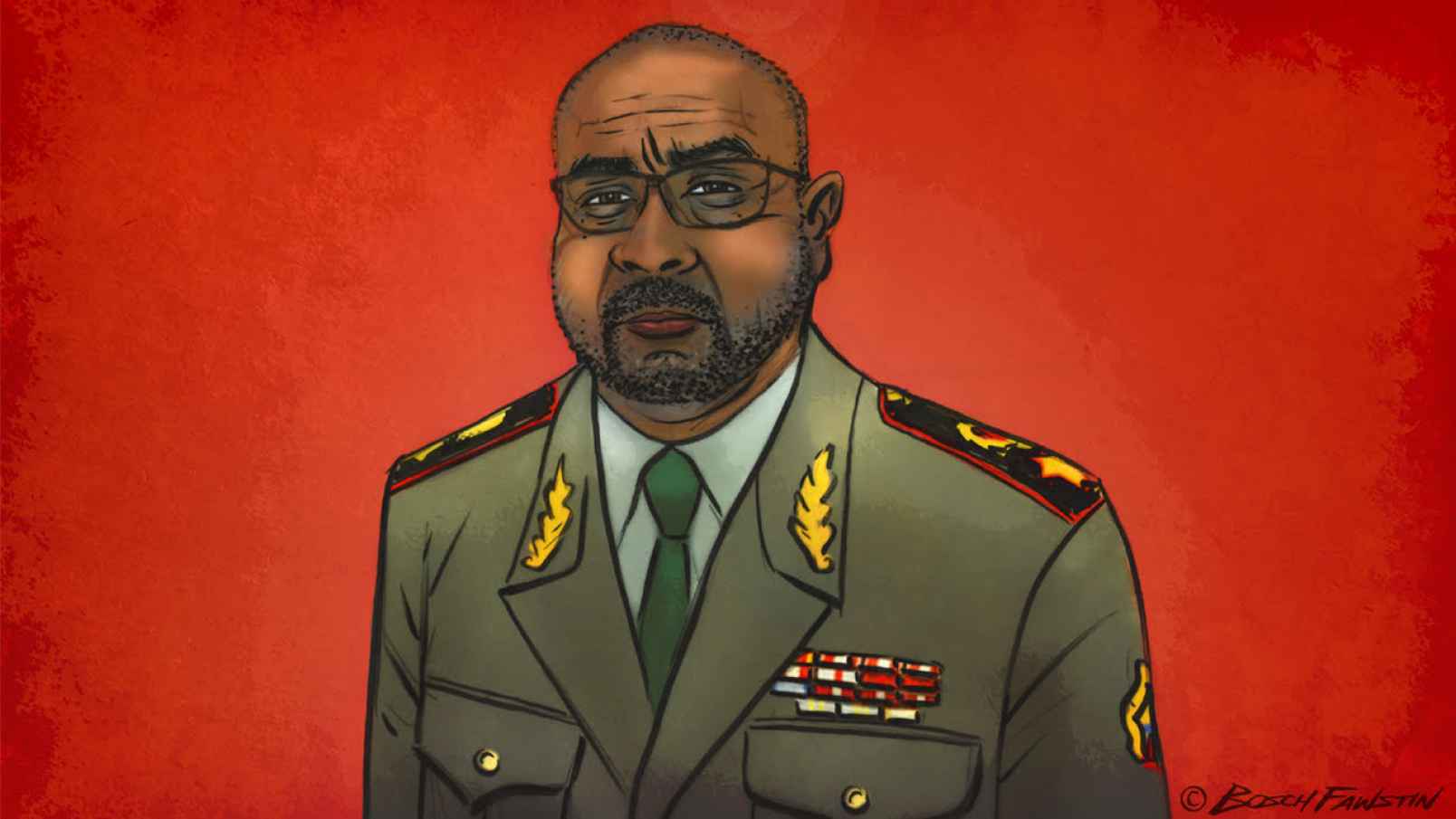 “Are you now, or have you ever been, a member of the Republican party?”

“One extremist is one too many,” Bishop Garrison told a Center for American Progress seminar.

Garrison, the man tasked by the Biden administration with fighting “extremism” in the military, had reversed Blackstone’s ratio, “It is better that ten guilty persons escape than that one innocent suffer.” It was better to wreck the careers of a million soldiers to find one extremist.

The Elizabeth Warren supporter was talking about his plans to fight extremism to a leftist group run by one of Biden’s few nominees so extreme she couldn’t manage to get past the Senate.

Speaking alongside Garrison was Jessica Gonzalez of Change the Terms, an organization advocating for more internet censorship, formerly of the National Hispanic Media Coalition which coordinated with La Raza whose name means The Race and was derived from the works of Nazi collaborator Jose Vasconcelos. Antonia Hernandez, another participant, had taken part in a La Raza convention. But these weren’t the extremists that Garrison was looking for.

Bishop Garrison is the sort of man who writes that, “when I walk into a room — a conference room, a board room, an auditorium, a lecture hall — I count the black and brown faces.”

The man in charge of hunting for extremism is a firm believer in systemic racism.

He speaks in the dogmatic cant of critical race theory, tweeting about “intersectionality” in national security, promoted Ta-Nehisi Coates’ call for racial reparations, and hails the racist revisionist history of the 1619 Project.

To Garrison, America is suffering from the “original sin of slavery” and “the threat of systemic racism is one of our greatest national security challenges.” Racism, he claims, is an “existential threat” and he sees it everywhere around him except when he looks in the bathroom mirror.

When Governor Ron DeSantis told Florida voters not to “monkey this up”, Garrison replied, “it was absolutely racist. To defend the statement is to defend racism.” But Garrison also defended the Portland Antifa rioters, insisting that the riots were a “peace demonstration against racism”.

Garrison had previously accused President Trump of “normalizing” extremists. “Support for him, a racist, is support for ALL his beliefs,” he had ranted. But he defended Rep. Ilhan Omar and Rep. Rashida Tlaib as women of color “facing racism led by the President of the United States.”

This is the hateful radical race-driven psyche of the man appointed to head the Countering Extremism Working Group whose first task is to create a definition of extremism for the military.

That definition would be used to prohibit “extremist activities among uniformed military personnel”, ask recruits about “previous extremist behavior” and urge “veterans” to report “any potential contact with an extremist group”. The Uniformed Military Code of Justice would be used to punish recruits and existing personnel found guilty of not informing on themselves.

The surveillance program included a proposal to vet candidates for national security positions by spying on their social media using algorithms that would scan for specific keywords.

After spending generations holding up the Army-McCarthy hearings as the epitome of fascism, leftists were embedding political tests, warning service members to inform on their own political views and those of their fellow service members, and threatening to punish those who would not inform in a purge of the military rank and file that McCarthy would never have dreamed of.

All to find that one “extremist”.

When President Trump criticized how Democrats had wrecked Baltimore, Garrison attacked him and tweeted, “the battle against racism & extremism is an issue of national security.”

Garrison reflexively blamed all racism, no matter how implausibly, on Trump and Republicans.

Even when a Texas school official posted, “You can’t count on a black quarterback”, Garrison blamed Trump.

Racism, in Garrison’s mind, is reducible to President Trump and his supporters. Anyone in the military who supports him is probably a dangerous racist and extremist.

The Countering Extremism Working Group had been tasked by Biden and Secretary of Defense Austin to purge the military of Trump supporters in order to fight extremism. Garrison was on the job, appearing at leftist seminars and events vowing to defeat the threat of extremism”.

But what had occasioned the crisis of extremism? The last two personnel to carry out terrorist attacks while serving in the military were Major Nidal Hassan and Sergeant Hasan Akbar.

Neither of the Muslim terrorists wore MAGA hats while they set out to murder Americans.

Garrison quickly corrected “ideology” to “behavior”, but it was too late.

Biden’s hitman for the military had made it clear that he was out to purge ideology, not to change behavior. The military was going to eliminate political wrong-think.

That’s a direct attack on the Constitution.

Garrison went on to define extremism as “unlawful or unregulated militias” and “anti-government extremism”. Not to mention “extremism based in immutable traits. Whether you’re talking about race or gender or ethnicity, none of it is acceptable and we wholeheartedly reject all of it”.

Believing that women and men were immutably different was now a form of extremism that Garrison and Biden were going to fight. One “extremist” who believes men and women are different was too many for Biden’s new woke army. And, indeed, Garrison had urged CVE or Countering Violent Extremism, originally used against Al Qaeda, for “misogynists”.

Because the agenda is much bigger than just pursuing the phantom menace of extremism.

Garrison’s big gimmick had been tying national security to leftist policies and personnel.

Bishop Garrison has spent a decade arguing that military readiness is inseparable from diversity and that diversity depends on implementing identity politics and every leftist program.

Therefore, according to him, our national security depends on everything from illegal alien amnesty to global warming to renaming Fort Benning, and President Trump’s refusal to remove the names of Confederate figures from military bases “jeopardizes U.S. national security”.

The Biden administration is plotting to transform the military by making national security inseparable from the leftist agenda. Garrison’s CEWG purge of the military is just setting the terms for a new definition of military leadership whose allegiance is purely to the leftist program.

Any officer who doesn’t support the leftist program becomes a threat to national security.

Like Stalin’s purge of the generals, Biden is undermining national security for political security, plotting to eliminate political opponents and transform the military into a leftist institution..

In the last 5 years, Democrats have hijacked national security to criminalize political disagreement as “disinformation” while spying on political opponents for “counterintelligence”.

This is just the beginning.

The purge will begin with imposing critical race theory on the military at every level. It will end with redefining the allegiance of the military away from the Constitution, and radicalize it into another ‘woke’ organization driven by the revolutionary imperatives of destroying America.

Like the Ivy League and Coca Cola, the military will become another former American institution whose leaders speak in critical race theory buzzwords, focused on purging political enemies, funding leftist causes, and tightening the death grip of the Left on the United States.

The Democrats may not succeed in their plot, but they will do their damndest to try. And Republicans will, as happens all too often, do nothing to stop the plot against our military.

A weakened America is facing a possible war with the People’s Republic of China. While the threat grows, Secretary of Defense Lloyd Austin and Bishop Garrison are fighting the military.

“Ensuring our security means eradicating hate in our ranks,” Garrison has argued.

It’s not the job of the military to brainwash soldiers or to control what they think. The men and women who join the military put their lives on the line to protect our country. Ensuring our security means freeing them from being harassed by racist witch hunters like Bishop Garrison.

And letting them do their job of protecting our country from Communist China.

Biden militarized our nation’s capital and demilitarized our border. He surrendered to Communist China and went to war against our own military. Garrison, like his Democrat bosses, spends a good deal of time throwing around words like “sedition” and “treason”.

But this is real treason.