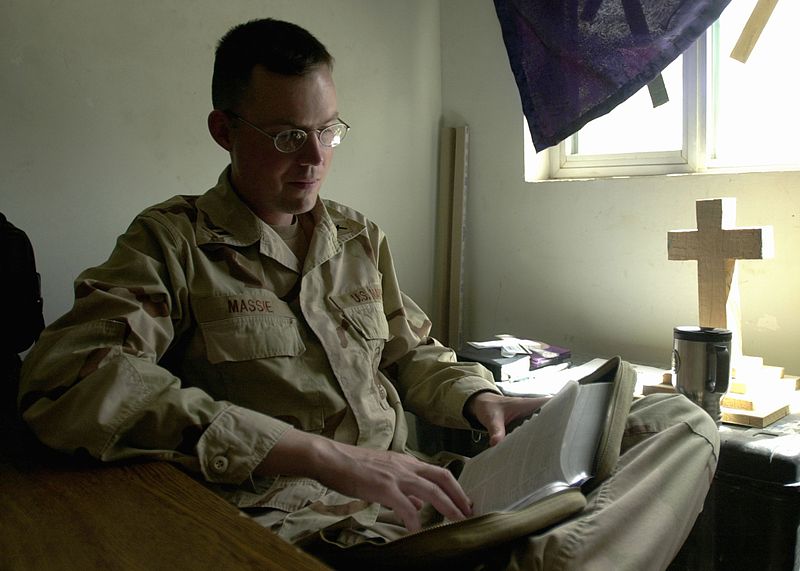 Whether you want to know this, believe this or not Satan and his legions, his foot soldiers and lieutenants are alive, well and prospering in the U.S. Depart,ment of Defense and every branch of U.S. military services.

It is a wonderful and strange thing in light of just how much darkness and evil have been cast over the U.S. Department of Defense and every U.S. military branch over these past 10, 12 years how this latest protection of religious liberties came about. Truly, by the will and power of the Spirit of God.

Read the article below. You’ll then see, if having been unarew or unfamiliar, the depth and breadth and fight within the U.S. Department of Defense and every U.S. military branch, with Satan’s puppet organization the Military Religious Freedom Foundation (MRFF) leading the way for the Evil One. Notice the appearance of good, of what is right, of “how can we oppose an organization with such a name?” as they have called themselves. Do not ever forget the devil and his ministers appear as angles of light. They work through cunning, seduction, beguiling. Not through fire, fear and pitchforks! Through luring, lulling, presenting themselves as beautiful, correct, right, the best path to take. If you doubt this read on below and also then seriously ponder their name (also see http://2 Corinthians 11).

Are you aware that in recent past years military chaplains in the field were ordered to remove the Christian cross from their tents and accomodations? That Pagan (now called New Age in the rebranding, repackagin of the same old sorcery and pagan worship, beliefs and practices) beliefs and practices were being promoted, elevated while Christianity and Christian beliefs were being squashed, banished and removed? That every branch of the U.S. military endorsed, embraced and prmoted beastiality now? Homosexuality? Every immoral and illicit sexual perversion? That Islam, Hinduism, Buddhism, and every other false belief were being pushed and promoted and not punished but that only Christians and Christianity was?

Are you aware that the U.S. Department of Defense and every U.S. military branch, under edits and orders from previous adminstrations and those in high places of power were dictating that the Christian cross would no longer be permitted in military cemetaries upon the death and burial of any person that served in the military? This was news put out there clearly for any and all to see. But so many are so otherwise consumed, distracted — I realize they must certainly find out who is “The Masked Singer” or which hasbeen washed up so-called “celebrity” wins on “Dances with the Stars,” or myriad other piles of dung the people turn to. Or, if they do seek any so-called news it’s only done for the most part via broadcast manipulated, edited, skewed distractions to give a viewer the sense they are discovering news when all it really is is to keep them from any real news! But all this information is put out there for learning, for consumption. If one would only care. Would only look. But few do. We have become a people turned from God. The majority now claiming no faith in anything at all. The “nones” far out number the people of faith in America at this time.

Over the past 10 years, much has been well sourced, well documented and posted here pertainin to these matters, as well as many other sources. Which most people could care less to discover and learn about while out government, our Department of Defense, and every branch of our military sunk into further darkness, depravity, and alignment with Satan and his legions, his ways, his lies and pushed out the One True God, pushed out, spat upon, mocked and reviled the Lord Jesus Christ and omitted the Holy Spirit, and made sure the Holy Bible was not seen or evidenced!

Are you aware of this?

This latest revision within the U.S. Department of Defense is light in the darkness. Breath were only suffocating death was present.

And this is going to be fought “…tooth and nail, day and night to stop this new, twisted and perverted version of DoD Instruction 1300.17,” said President Mikey Weinstein of benign, wonderful sounding, oh-so-right-sounding Military Religious Freedom Foundation as you’ll see when you read the article below.

Pray dear ones. Pray large, pray continually, pray fervently without ceasing and pray faithfully. For our nation is spiritually ill. Spiritually ailing. We have turned from God, turned from the Lord Jesus Christ, turned from our foundations. Pray. Pray. And pray some more!

http://Partake, Pray With, Watch and Partake Live of the 2020 Prayer March in Washington, D.C. On Saturday, September 26th From Noon until 2:00 p.m. EST

WASHINGTON — The U.S. Department of Defense (DoD) has released updated guidelines reinforcing religious liberty protections for those who serve in the nation’s Armed Forces.

“Pursuant to the Free Exercise Clause of the First Amendment to the United States Constitution, service members have the right to observe the tenets of their religion or to observe no religion at all, as provided in this issuance,” the policy document, “Religious Liberty in the Military Services,” released earlier this month, reads.

It states that the military “will accommodate individual expressions of sincerely held beliefs (conscience, moral principles, or religious beliefs) which do not have an adverse impact on military readiness, unit cohesion, good order and discipline, or health and safety,” and “[a] service member’s expression of such beliefs may not, in so far as practicable, be used as the basis of any adverse personnel action, discrimination, or denial of promotion, schooling, training, or assignment.”

The guidelines also protect the religious convictions of chaplains, outlining that they may not be compelled to perform any ritual or ceremony that conflicts with their conscience and religious beliefs, nor may chaplains be punished for declining to participate.

The updates were made to reflect the requirements of the federal Religious Freedom Restoration Act (RFRA) of 1993, introduced by Sen. Chuck Schumer, D-NY, and signed by then-President Bill Clinton, which prohibits the government from “substantially burden[ing] a person’s exercise of religion” unless the law or regulation “is in furtherance of a compelling governmental interest” and “is the least restrictive means of furthering that … interest.”

Read the document in full here.

Reaction to the guidance has been mixed, as the Military Religious Freedom Foundation (MRFF) opined that the updated policy will “obliterate the wall of separation between Church and State in our military.”

“MRFF will fight tooth and nail, day and night to stop this new, twisted and perverted version of DoD Instruction 1300.17,” said President Mikey Weinstein in a statement.

“Indeed, MRFF will never allow this brand new regulatory provision to illicitly buttress the already repugnant and omnipresent efforts of the fundamentalist Christian religious right from perpetuating its pervasive and pernicious pattern and practice of forcing its weaponized version of the Gospel of Jesus Christ upon otherwise defenseless military subordinates,” he remarked.

However, the Texas-based First Liberty Institute applauded the move, stating that it “clarifies what the Constitution and federal law already says and applies it to the DoD.”

“This new guidance is a great victory for America’s brave service members, for whom faith is an essential element of their life and duty,” said general counsel Mike Berry, who, according to the Military Times, served in the Marine Corps for seven years and is now a reservist. “Since the days of the Revolutionary War, religious freedom has been a force multiplier for our military.”

According to reports, on May 2, 1778, then-Commander in Chief George Washington instructed in a letter to the troops at Valley Forge:

“The commander in chief directs that divine service be performed every Sunday at 11 o’clock in each brigade which has a chaplain. Those brigades which have none will attend the places of worship nearest to them. It is expected that officers of all ranks will, by their attendance, set an example for their men. While we are zealously performing the duties of good citizens and soldiers, we certainly ought not to be inattentive to the higher duties of religion. To the distinguished character of patriot, it should be our highest glory to laud the more distinguished character of Christian.”