Tyrants Want to Clip Our Wings of Freedom 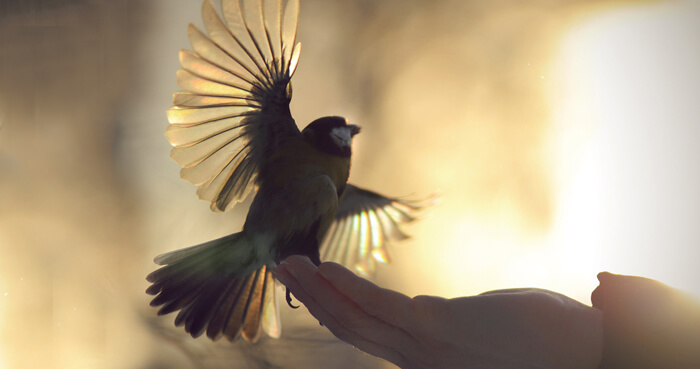 I believe in part what we have experienced over the past year has been a test to see how compliant, how controllable the world’s population can be made. A test preparing the way for what is to come.

And evil has seen the people are very mailable, complaint and will do for the most part what the authorities, the tyrants and despots decree.

9/11 and the aftermath was the beginning. A test in America. And the people eagerly abandoned freedoms and liberties for a false sense of safety.

The next test, after a while, was to see how complaint the people of the world would be.

Fear is an incredible force.

If this was not done with intent? Make no mistake — the evil in this world dwelling in the hearts and minds of men and women of perceived power saw and how quickly the people would submit. How fear could be inflicted. And how entire nations could be shut down and controlled. By a few words spoken and sent out over billions of electronic devices.

Tyrants Want to Clip Our Wings of Freedom

Self-identifying as a liberal feminist, Naomi Wolf is a Yale graduate, Rhodes Scholar, and former political advisor to Al Gore and Bill Clinton. She has ten books to her name and recently sounded the alarm at the growing power of “autocratic tyrants” who are placing sustainable freedom in jeopardy in America.

“The terrible crisis that we’re in under the guise of a real medical pandemic,” Ms. Wolf told Tucker Carlson, “[is] really moving us into a coup situation, a police state. The state has now crushed businesses, kept us from gathering in free assembly to worship, as the First Amendment provides, is invading our bodies, … which is a violation of the Fourth Amendment, is restricting movement. … The violations go on and on and on.

“Tens of thousands of small businesses have been crushed; why were they crushed? Not because the pandemic forced them to, there is no real science underlying a lot of these closures, it’s about autocratic tyrants at the state and national levels creating a kind of merger of corporate power and government power, which is really characteristic of Italian fascism from the ’20s.

“They’re using that to engage in a kind of emergency orders that simply strip us of our rights: rights to property, rights to assembly, rights to worship, and all of the rights that our Constitution guarantees.

“I know from history that [tyrannical decrees] always drag on and on and on,” Wolf said. “Every month I get an email that Governor Cuomo is extending emergency powers [and] emergency measures.

“This is completely unprecedented – lockdowns have never been done before in free societies – and we’re turning into a version of a totalitarian state before everyone’s eyes.”

Here are some of the demoralizing examples of the hypocritical self-righteousness and sanctimonious underhandedness of political leaders who are supposed to lead by example:

Nancy Pelosi’s “good-for-thee-but-not-for-me” duplicity of getting her hair done during the lockdown. Governor Newsom running up a $12K wine tab at The French Laundry, a three-star Michelin restaurant private room with lobbyists [all without the masks implemented by Newsom’s government edict]. California Democrat Congressman Eric Swalwell’s intimacy with a Chinese spy while [still] serving on the U.S. House Intelligence Committee. Virginia Governor Northam’s black face and rumored claim to have violated his state’s stay-at-home order to travel to North Carolina’s Outer Banks. Bill Clinton’s rendezvous with Obama’s Attorney General Loretta Lynch on the tarmac in Phoenix. The shakedown of foreign enemies by the Clinton couple to fund the Clinton Presidential Library and Museum. President Obama’s own possible collusion in concealing and destroying evidence and exculpatory information to a FISA court. President Obama’s potential complicity in the infiltration of candidate Trump’s presidential campaign. And most recently media’s cover-up of New York Governor Andrew Cuomo’s nursing home COVID scandal.

Whereas in the past any of the above would have brought riot, revolution, or repentance, this is no longer the case, with the American electorate having turned into meek sheep.

The Main Stream Media’s subterfuge and false self-presentation as “fair and balanced” is wearing thin. With their thumbs on the scales of liberal bias in media, liberal partiality in elections, and collusion with the sway and lordliness of Big Tech and Silicon Valley – who feel no need to disguise their iron curtain censorship and enmity towards those with a different opinion or ideology – the MSM has become indistinguishable from the Soviet propaganda organs of Izvestia and Pravda.

Allum Bokhari, the senior technology correspondent for Breitbart News, lays it all out:

“Today, Big Tech doesn’t just mean control over online information. It means control over news. It means control over commerce. It means control over politics. And how are the corporate tech giants using their control? Judging by the three biggest moves they have made – the censoring of the New York Post in October when it published its blockbuster stories on Biden family corruption, the censorship and eventual banning from the Web of President Trump, and the coordinated takedown of the upstart social media site Parler – it is obvious that Big Tech’s priority today is to support the political Left and the Washington establishment.

“Without any oversight or checks and balances, we will never have another free and fair election. [Google, Facebook, Twitter, YouTube, TikTok, Snapchat, Amazon] don’t just want to control information or even voting behavior – they want to manipulate people’s worldview.

Harold J. Berman [1918-2007], the American legal scholar once described as “one of the great polymaths of American legal education,” made it equally clear in The Interaction of Law and Religion:

“Law has to be believed in, or it will not work. It involves not only man’s reason and will, but his emotions, his intuitions and commitments, and his faith.

“The very concept of the ongoingness of law, of its organic growth over generations and centuries, is itself a religious concept rooted in Judaism and Christianity. Moreover, in Western history since the 11th century, the ongoing legal tradition has been interrupted periodically by great revolutions, each of which has attacked the preexisting system of law in the name of a religious or quasi-religious vision [read secularism] and each of which has eventually created new legal institutions based on that vision.”

“Great revolution” is the term used by Pat Buchanan in his prophetic 2007 bestseller, Day of Reckoning.

“The real revolution of the last half-century began in the 1960s and drove wedges through society that endure today. This revolution involved the repudiation of America’s past as racist, sexist, imperialist, and genocidal in its treatment of women, Indians, Africans, and all peoples of color.

“This revolution involved the rejection and overthrow of traditional Christian morality and Christianity itself as bigoted and repressive, and the conversion of the young to a sensuality, self-indulgence, and promiscuity condemned by all Christian faiths.

“This revolution involved the overturning of all laws rooted in Christian doctrine regarding divorce, homosexuality, abortion, and the purge of all Christian symbols, books, and practices from public schools. This revolution was about de-Christianizing and secularizing America.”

All this has been achieved through the removal of prayer to Jehovah God from public education in 1962 [Engel v. Vitale]; the removal of the Bible – after 300 years of America’s meteoric rise – from public schools in 1963 [Abington School District v. Schempp]; the removal of the Ten Commandments from public schools, courthouses, and government buildings in 1980 [Stone v. Graham]; the extermination of unborn babies in 1973 [Roe v. Wade]; the exaltation and normalization of homosexual intercourse and legalization of same-sex marriage in 2015 [Obergefell v. Hodges]; the expansion of homosexual and transgender rights in 2020 [Bostock v. Clayton County]; and the passing of the Equality Act by the House Democratic leadership on February 25, 2021.

It all shows a nation morally adrift.

When spiritual understanding in the culture is lacking, when America’s political class and leadership fails to acknowledge the inherent merits of a biblically-based culture, when Democrat and Republican leadership is littered with cultural Marxists and serial adulterers, when judicial decisions are based on “hunches” instead of truth, we will have no trouble understanding why God has paused His blessings on a once Christian nation. Sin and suffering are inevitable companions.

What should be done?

Yet, thanks be to God, there is a little cloud about “the size of a man’s hand rising from the sea” [1 Kings 18:44]. Gideons and Rehabs are beginning to stand.