Turkey’s Hagia Sophia: “It’s Like If Saint Peter’s Had Been Turned Into a Mosque” 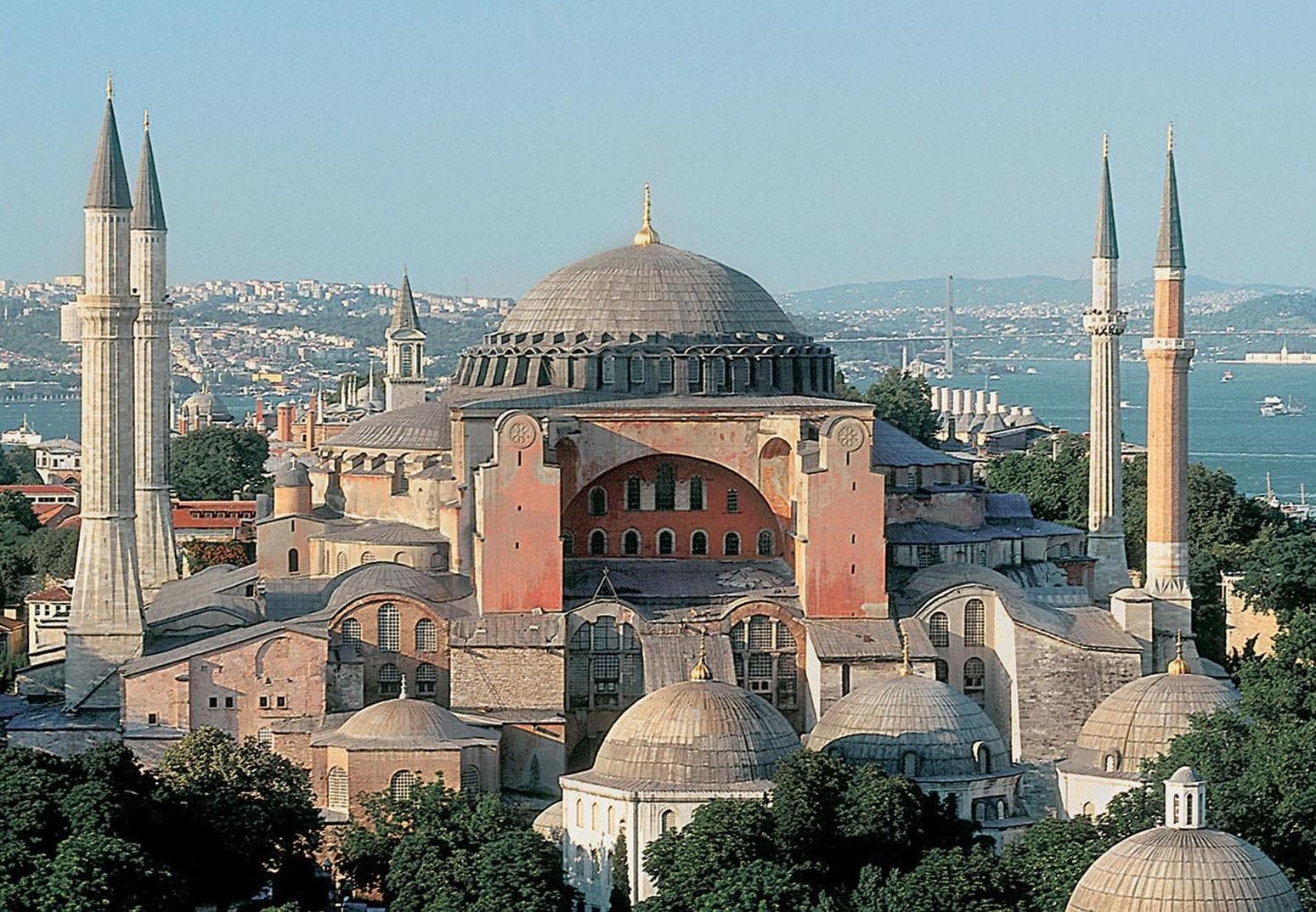 While Saint Peter’s in Rome is not considered a true Christian church by me, nonetheless the comparison does drive the point home in the article below.

The spread of Islam, the rising of Erdogan and Islam in Turkey has proven horrendous for any Christian living in the region.

Whenever a Christian church is consumed and taken over by Islam it is, our ought to be, a time of sadness. A time of seeing what is transpiring all around us in this world given over to corrupt, reprobate, evil minds. In these last of the last days.

If not believing this? Then after reading the article below, click on the link in the related section and read what a truly lost, and false so-called “Christian theologian” has to say on the subject. As well as checking out the other “RELATED” stories on this subject following the main article.

Turkey’s Hagia Sophia: “It’s Like If Saint Peter’s Had Been Turned Into a Mosque”

“The city that Constantine had protected for more than a thousand years… has now undergone, in this unfortunate year, the destruction by the Turks. I suffer at the thought that the temple of Saint Sophia, famous all over the world, has been destroyed or desecrated. This is a second death for Homer, a second passing for Plato”. These words by the great humanist, Enea Silvio Piccolomini, who became Pope Pius II, were written five centuries ago, after the great Christian city of Constantinople fell to the Ottomans.

Last week, Turkish President Recep Tayyip Erdogan issued an unprecedented decree converting Hagia Sophia once again into a mosque. Erdogan’s decree is a gesture of immense symbolism and historic meaning. “A threat against Hagia Sophia,” said the Russian Orthodox Patriarch Kirill, “is a threat for the whole of Christian civilization”.

“We urge the Government of Turkey to continue to maintain the Hagia Sophia as a museum, as an exemplar of its commitment to respect the faith traditions and diverse history that contributed to the Republic of Turkey, and to ensure it remains accessible to all”.

For 916 years, Hagia Sophia had been the “world’s largest basilica” and the main seat of the Eastern Orthodox church where, for centuries, emperors were crowned.

On May 29, 1453, Sultan Mehmet II, riding a white horse, arrived at the Hagia Sophia, the cathedral of “Divine Wisdom” built a thousand years earlier by the Byzantine Emperor Justinian I. Sultan Mehmet II, after bringing an end to the great Christian Byzantine empire, prayed to Allah in the largest church of Eastern Christianity.

“It’s like if Saint Peter’s had been turned into a mosque,” said Michael Talbot, a lecturer of history at the University of Greenwich. “It’s the fact that the seat of that church is no longer operating as a church and is in the hands of a rival religion”.

Under the Ottomans, the Hagia Sophia was converted into a mosque and remained so until 1934, when the secularist Turkish leader, Mustafa Kemal Atatürk, turned it into a museum. It was to have been the emblem of a new Turkey, capable of blending the features of the East and the West.

Last week, after Erdogan’s new decree, Islamists, shouting “Allahu Akbar”, converged on the former cathedral. The site will be reopen for Muslim prayers as a mosque on July 24. It is believed that during the Muslim prayers, Hagia Sophia’s world famous Byzantine mosaics will be covered.

Turkey did not, strictly speaking, need another mosque: in recent years Erdogan has built 17,000 mosques in the country. According to Ertugrul Özkök, writing in the Turkish newspaper Hurriyet:

“A country where every day calls to prayer are recited from its 80,000 mosques, where prayers are performed five times a day, will now go and re-conquer one of the biggest symbols of the Orthodox world. Is that so?… Would you have enjoyed it so much if a mosque at the center of Europe were converted into a church?”

By appropriating the building, the defenders of political Islam seem to be trying to “erase Turkey’s Christian past“. A century ago, Christians made up 20% of Turkey’s population, while now the figure is just 0.2%. According to Benny Morris and Dror Ze’evi, in their book, The Thirty-Year Genocide: Turkey’s Destruction of Its Christian Minorities, 1894–1924:

“Turkey’s Armenian, Greek and Assyrian (or Syriac) communities disappeared as a result of a staggered campaign of genocide beginning in 1894, perpetrated against them by their Muslim neighbors… By 1924, the Christian communities of Turkey and its adjacent territories had been destroyed”.

Turkey has more Biblical sites in it than any other region in the Middle East except Israel. Turks in occupied northern Cyprus since 1974 have already wiped out its Christian past.

Inside Turkey, Erdogan has similarly escalated his war on the Syriac Church by seizing 50 churches, monasteries, and religious properties.

He also evidently wanted to inflict humiliation on the West. The day before his announcement, he expelled Christian missionaries. By turning Hagia Sophia into a mosque, Erdogan has been able to embarrass Washington, mock Brussels and defy Moscow.

Four popes have visited the former cathedral: St. Paul VI, St. John Paul II, Benedict XVI and Francis I. Yet, 24 hours after its conversion to a mosque, no major Christian leader or scholar has denounced Turkey’s religious assault on the Hagia Sophia.

Its current change of identity appears part of a long, deliberate project of re-Islamization. In 2016, for the first time in 81 years, Hagia Sophia got its own imam. Earlier, in 2012, in Iznik, another Hagia Sophia was converted into a mosque. The location was significant: Iznik, the ancient Nicaea, is where bishops from all over the Roman Empire had gathered in 325 to craft the Christian creed. A year later, in Trabzon, another famous Hagia Sophia, a museum since 1961, was also turned into a mosque and its Byzantine mosaics “covered with curtains and carpets”.

When Erdogan was campaigning to become the mayor of Istanbul in 1994, he was already talking about “the second conquest of Istanbul” and even then had set his sights on taking back Hagia Sophia.

“Celebrating a conquest that took place more than five centuries ago may seem anachronistic, I would even say absurd, to European leaders”, wrote the Turkish novelist Nedim Gürsel. “For Erdogan, the capture of Constantinople is another pretext for challenging the West”.

According to Tugba Tanyeri Erdemir, a research associate at the University of Pittsburgh, the transformation of Hagia Sophia might also “embolden extremists to intensify their campaign of forced conversion and destruction of minority heritage sites”.

“To convert it back to a mosque,” said Turkey’s Nobel Laureate Orhan Pamuk, “is to say to the rest of the world unfortunately we are not secular anymore”.

Political Islam is on the offensive on many fronts. Its advocates have been flooding Europe with mosques. The “largest mosque in Europe” will be a Turkish one in Strasbourg. In Germany, Turkey controls 900 mosques out of a total of 2,400. Extremists have also been imposing on Europe a new ideological crime, “Islamophobia“, and have been financing and witnessing the “extinction” of all that remains of the splendor of Eastern Christianity that used to glorify these lands six centuries before Islam. Now, Islamists are converting Hagia Sophia into a mosque. They are not doing it only in their countries. In France, they have also asked for churches to be converted into mosques.

In Turkey, meanwhile, Erdogan keeps refusing to give permission to build any new churches. In fairness, in 2015, Turkey finally did approve a plan to build its first new church in 90 years.

Erdogan, according to a French scholar of religions, Jean-Francois Colosimo, expecting “a civilizational Munich” — a reference to the 1938 pact in which France and Britain surrendered Czechoslovakia to Hitler. Erdogan could not have chosen a better moment. For weeks, politicians and elites in the West have been tearing down monuments — either doing it themselves or silently watching the barbaric armies of Western self-hatred.

Double-standards now seem to be the norm as well. When cartoons of Mohammed appeared in Danish and French newspapers in 2005, the Muslim world erupted in violence. The same year, when Newsweek reported an alleged desecration of a Koran in Guantanamo Bay, the Muslim world, before the magazine quickly retracted the article, flew into a rage. ‘When Pope Benedict XVI in Regensburg asked Islam to renounce fanaticism and intolerance in 2014, the Muslim world again erupted in violence. When Israel, in 2017, installed metal detectors in a compound to protect sites holy to Muslims and Jews, Erdogan accused Israel of destroying the Islamic character of Jerusalem. Now, however, that Turkey is turning its most important formerly Christian monument into a mosque, there is no protest, only silence and mumbling, which are nothing but the soundtrack of the West’s submission to Islam.

“An apathy reminiscent of the absence of solidarity when the Byzantine Christian civilization sank with the fall of Constantinople in May 1453”, Ivan Rioufol wrote in Le Figaro. “Neither Venice, France, nor England has come to the aid of this resplendent part of their culture. The story repeats itself”.

Giulio Meotti, Cultural Editor for Il Foglio, is an Italian journalist and author.

http://Christian theologian: “Christians should be delighted” at Hagia Sophia becoming a mosque

http://Why Erdogan Converted the Hagia Sophia to a Mosque, and Why the State Department Should Be Concerned

http://Pope Francis: “I think of Hagia Sophia and I am very saddened”