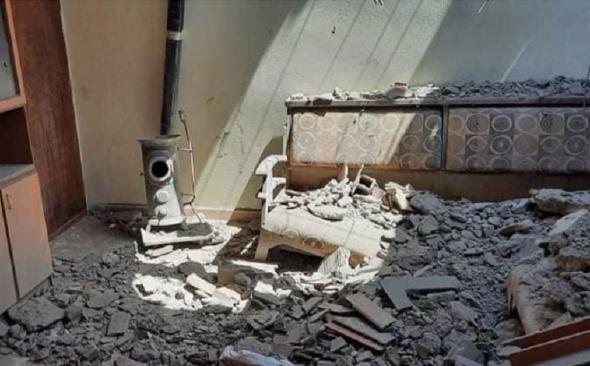 Homes destroyed in the Assyrian Christian village of Tel Tawil, Tel Tamer district, in August. The displacement of Christians in Syria by Turkish bombing has drawn comparisons with the Ottoman Empire and Islamic State [Image credit: AsiaNews.it]

Turkey has escalated a supposedly anti-terrorist military campaign in Syria and Iraq that appears to be targeting Christians and other minorities.

A spate of Turkish attacks beginning in late August – including the bombing of a hospital – has been responsible for the deaths of at least a dozen civilians.

“It is unclear,” argued an analyst in The Jerusalem Post, “why [Turkey’s] claims to fight ‘terrorism’ often coincide with bombing minorities in Iraq and Syria and carrying out attacks against Christian, Kurdish and Yazidi minorities.”

Amy Austin Holmes, a Fellow of the Woodrow Wilson Center in Washington, D.C., notes that “Yazidis, Christians and Kurds have fled in droves from the Turkish-occupied areas of Syria”.

Dr. Holmes explained that Turkey’s military campaign has continued in Syria despite the signing of a U.S.-brokered ceasefire agreement in October 2019.

Indeed, she added, in the first year after Turkey signed the agreement, “the Assyrian Christian region of Tel Tamer was targeted every single month.”

Dr. Holmes also argued, “Turkey has had ambition to expand its territorial control of Syria for several years now. This recent escalation is pretty significant. They’re doing this while the world is distracted by what’s happening in Afghanistan.”

Turkey claims to be combating the Kurdistan Workers’ Party (PKK) – a Marxist-Leninist guerrilla group designated as a terrorist organization by Turkey, the U.S. and the European Union – as well as groups it alleges are affiliated to the PKK.

The operations in Syria and Iraqi Kurdistan, however, have indiscriminately targeted Christian communities and other civilian communities. These minority groups have already suffered oppression, persecution and death at the hands of Islamic State (IS – also known as ISIS, ISIL, Daesh).

Mordechai Kedar, an expert on Middle East politics, argues that despite claims to be combating terrorism, Turkey helped to facilitate the success of IS.

“The ability of ISIS to become a functioning state so quickly is largely due to its relationship with President [Recep Tayyip] Erdoğan in Turkey,” said Dr. Kemar. “Not only did President Erdoğan never launch any counterterror operations to disrupt ISIS’s networks or recruitment activities, he provided it with assistance.”

In August, Elias Antar Elias, the head of the Assyrian People’s Assembly in the Jazira region of northeast Syria, said, “The recent attacks on our villages brought back to our memory Safar Barlik in 1915, when the Ottoman Empire targeted us … Now, here in Syria, history is repeating itself.”

“Those who attack our villages … are no different from ISIS because they are displacing us and destroying our villages,” Elias continued.

Turkey’s President Erdoğan is increasingly open about his ambitions to spread Turkish Islamic influence, as if to re-establish the Ottoman Empire. In the summer of 2020, Erdoğan ordered two historic buildings in Istanbul – Hagia Sophia and The Church of the Holy Savior – originally Christian churches, then mosques, and later museums, to be turned back into mosques.

In a speech given at Hagia Sophia in July 2020, Erdoğan declared that “the conquest of Istanbul and the conversion of the Hagia Sophia into a mosque are among the most glorious chapters in Turkish history,” adding, in the words of a 20th-century Turkish poet, “This will be Hagia Sophia, this will be a second conquest, the new resurrection. This is definite. These days are close. Maybe tomorrow, maybe sooner than tomorrow.”