This Is How Conservatives Get Erased From the Internet 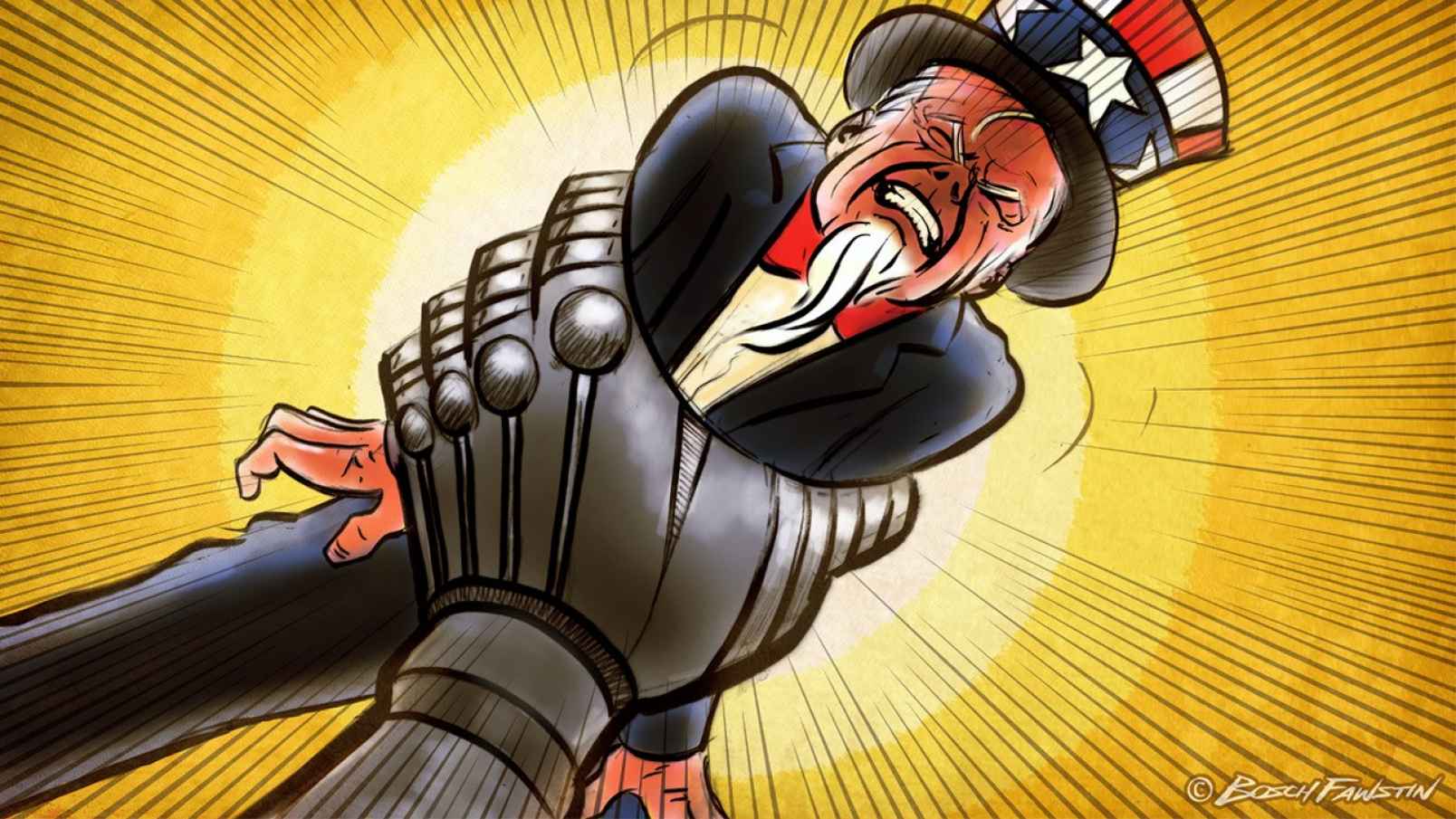 This Is How Conservatives Get Erased From the Internet

And this is how we can change it.

Two companies, Google and Apple, each control about half of the smartphone market. So when the two companies made a move against Parler, the conservative social media alternative, it effectively erased its app from existence. Joining the party was a third member of the FAANG Big Tech consortium, Amazon, which de-platformed Parler from Amazon Web Services.

AWS controls a third of the cloud marketplace. Microsoft and Google are in 2nd and 3rd place.

Blocking an app doesn’t permanently kill a social networking service, though it places it at a structural disadvantage, but Apple and Google can flag sites as unsafe through their browsers.

Google’s Chrome commands 45% of the browser market in America while Apple’s Safari has a little under 40%. While browser flags can be currently bypassed, it would add a further structural disadvantage that would make people less likely to use the service, and there’s nothing stopping Apple and Google from permanently blocking access to any conservative site.

There are other browsers, but Google and Apple could kick any browser off their app stores that doesn’t comply with a blocklist of ‘unsafe’ sites, further narrowing the potential browser options.

With desktops and laptops, Microsoft and Apple can block access to sites at the operating system level by using their built-in antivirus software. That can also be turned off. For now.

Google controls over 80% of search traffic. Facebook controls some 80% of social media. Being delisted and de-platformed by them can be all but fatal to any site trying to attract new users.

Some conservatives take refuge in the illusion of alternatives from smaller companies, but in the oligarchy, smaller companies usually directly or indirectly rely on services from Big Tech.

DuckDuckGo, for example, serves up searches from Microsoft’s Bing. Many smaller alternative companies are likewise dependent on Big Tech players. The small companies conservatives take refuge in are still reliant on the infrastructure of the big players and can be easily pressured into joining their boycotts or have their own services cut off by the Big Tech oligarchy.

There are workarounds for all of these, but when visiting a conservative site turns into the equivalent of going to a speakeasy, that eliminates much of the potential user base.

Sites can also be crushed at the domain level, banishing them to the dark web.

If conservatives distributing information becomes as onerous as Chinese political dissidents bypassing the Great Firewall, what will be left of the conservative movement online?

It will take more manufactured emergencies to unlock some of these options, but there should be little doubt that they will be. The Democrats and their media allies invented the threat of “disinformation” out of thin air and still can’t properly explain what it means. But they successfully used it to engage in a massive online purge of their political opponents.

A violent clash or a random shooting by an unstable man will unlock another censorship tier. But it could just as easily be another conservative politician winning when he’s supposed to lose.

Direct de-platforming is only the crudest tool. Pressure campaigns have targeted advertising and payment options for conservative sites. Google, again, controls 37% of the digital ad market. Payment options at the top are controlled by the same old team of players. That’s what happened when the David Horowitz Freedom Center was cut off by Visa and Mastercard.

The ‘killer app’ though won’t be direct internet censorship, but corporate cancel culture.

Instead of Facebook deleting your post, you will be fired from your job for posting it. If you own a small business, larger suppliers and companies will no longer work with you. If you belong to a trade association, you’ll be ousted. If your business requires a license, you will lose it.

In November, I wrote about how the National Association of Realtors had modified its regulations to allow members to be forced out of the business over their social media posts.

“Doesn’t this mean that if I post my opinion online and someone doesn’t agree with it, that I can lose my membership and be forced out of the business?” the NAR FAQ asks.

That’s not an isolated policy. Similar moves are underway in various trade associations that would treat politically incorrect views as a violation of professional obligations. Cancel culture isn’t a new phenomenon, but this is the industrialization of cancel culture which takes it from an isolated phenomenon to a collective system of enforcement like China’s social credit score.

This includes monitoring social media profiles and flagging employees, renters, or businesses with conservative views as a potential risk.

Yelp has already implemented a similar program for some eateries. It’s not alone.

Big Tech censorship is a symptom of a much bigger problem which is the criminalization of conservative views within the corporate world. The FAANG bloc has led the way, but big business has been slowly tilting leftward. The giant multinationals are the worst offenders, at least when it comes to public virtue signaling, and they control a great deal of the economy.

Conservatives never asked companies to adopt their political views. Leftists made it mandatory and organized pressure campaigns from the outside and the inside to make it happen.

That’s why they won. It’s why conservatives are losing.

Leftists took over academia and cultural industries by organizing networks inside and then imposing their own leadership and institutional ideologies that made their views mandatory and left no room for dissent, while conservatives failed to organize a common front against them..

Naming major conservative musicians and movie stars was easy. Now name one. Under 40.

The same takeover is happening at a slower pace inside the corporate world, backed by diversity quotas and social responsibility statements. I wrote about this at length in my Freedom Center pamphlet, Thought Control, Inc, and internet censorship is a symptom of that threat.

The whole threat will erase conservatives from the internet and from public life.

Can conservatives influence, campaign, and win elections under these conditions? The endgame here is eliminating conservatives as a meaningful political force in America.

That’s the scale of the threat. Conservatives have spent too long ignoring it. And even now they underestimate the sheer scale of the strategy to erase them from the marketplace of ideas.

But Big Tech isn’t as powerful as it seems. It’s vulnerable and it’s worried.

That’s why Big Tech waited until it was confident that the Senate would be in the hands of the Democrats before it made its big move against Trump. That’s weakness, not strength.

Forcing out President Trump was a priority for Big Tech, not only for political, but economic reasons. The Trump administration was the first to aggressively go after Google and Facebook on antitrust grounds. It’s no coincidence that Google is a Biden Inaugural Committee donor.

President Trump was the first GOP president to stop being a cheap corporate date. Republicans, even some in the MAGA class, are happy to trade favorable legislation for contributions with economic interests, from Big Tech to the media, that hate conservatives.

The Left understood that corporate policy is national policy. Its members adopted conservative boycotts of companies behaving immorally just when conservatives decided to abandon them. Leftists chose brands based on their politics, while conservatives had no idea what the politics of their cable company or breakfast cereal were. That’s why corporate politics turned leftist.

And if that doesn’t change, there will be fewer Republicans and a lot fewer conservatives.

The battle for the corporation, unlike academia and the media, isn’t a lost cause. But it actually needs to be fought. And one of the best tools for that fight is duplicating the Left’s infrastructure for monitoring the interactions between politicians and corporate interests, and demanding that the politicians represent conservatives, not just their campaign war chests, with corporations.

Conservatives view the corporate landscape as an amorphous free market while leftists see friendly and unfriendly companies. After generations of this, the market has become a lot more leftist and a lot less free. Conservatives need a better response to this crisis than to roll out the old claims about their commitment to a free system that failed in academia and the media.

If you want to imagine a country where conservatives aren’t just fighting a rear-guard action against an ascendant radical movement that is taking over everything, that’s the place to start.

This may strike some free-market fundamentalists as anathema, but a better word is survival.

There is nothing free about a market controlled by a Big Tech oligarchy, a handful of multinationals and giant chains, and corporate fronts for Chinese business interests.

The only way to ‘free’ the market is to make it more open by demolishing the oligarchy.

Facebook and Twitter censorship may be what conservatives see immediately, but the big picture is the erasure of conservatism as a movement from America.

It didn’t have to happen. It still doesn’t.

Conservatives have lost their grip on many key institutions, but they still have a foothold on political power. The question is whether they’re willing to use it before they lose that too.