The true meaning of the rainbow 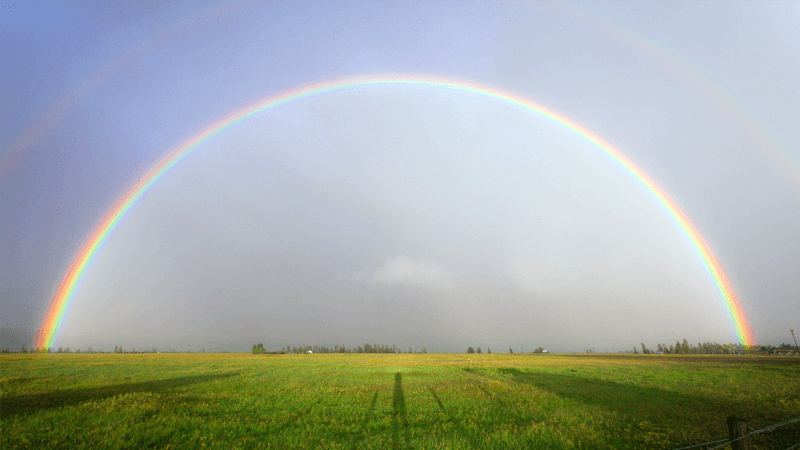 The true meaning of the rainbow

We might not see much sun over these long winter months, but we have seen plenty of the rainbow. It seems that Government agencies, Premiership football clubs, police forces, schools and supermarkets are falling over themselves to publicise their lesbian, homosexual, bisexual and transgender credentials.

Of course the ubiquitous symbol isn’t a rainbow at all. It currently has six colours, previously it had eight and included turquoise and pink. But as Christians, we have the opportunity to remind society that the rainbow, the real rainbow, symbolises something very different.

Its true meaning comes from the Bible.

Genesis 9:12-15 states: “And God said, ‘This is the sign of the covenant I am making between me and you and every living creature with you, a covenant for all generations to come: I have set my rainbow in the clouds, and it will be the sign of the covenant between me and the earth. Whenever I bring clouds over the earth and the rainbow appears in the clouds, I will remember my covenant between me and you and all living creatures of every kind. Never again will the waters become a flood to destroy all life.’”

The rainbow reassured Noah and his family that a flood on the same scale will never take place again. After the Flood, God made an everlasting covenant with Noah, his family, their descendants, and all the living creatures. He promised never again to destroy the earth by a flood. The rainbow was the sign of that promise – a reminder of God’s commitment to the earth.

The rainbow is also a picture of God’s beauty and holiness. Ezekiel 1:28: “Like the appearance of a rainbow in the clouds on a rainy day, so was the radiance around him. This was the appearance of the likeness of the glory of the LORD.”

The rainbow is precious. It’s a symbol of what theologians call God’s common grace – the grace he shows to all people saved and unsaved alike. With the rainbow God promised to restrain his wrath. He promised never again to visit destruction on the earth in the same way. Judgement was delayed, for Noah, his descendants, and for the rest of creation. God would continue to provide rain and sun. He would provide seasons and harvest. Land could be worked, crops could be grown.

It also provided an opportunity – a day of grace. In delaying judgement, God has provided the opportunity for the Gospel to be proclaimed to every tribe and nation. An opportunity for every man, woman, boy and girl to recognise their Creator. The rainbow reminds us how our heavenly Father is prepared to restrain his anger against sin, and deal with it through his Son Jesus Christ. God not only delayed his judgement, but provided a way of salvation for us.

So the rainbow is not a merely a symbol. It’s not simply part of an ancient story. It is a living example of God’s faithfulness. It is an assurance that God has not forgotten us and that he continues to work in this world.

So the next time you encounter the ‘rainbow’ flag, why not take the opportunity to explain to those flying it about the true meaning of the rainbow – and our covenant-making, covenant-keeping God.