The Sad and Lost Current State of What Passes For Christian Leadership — Liberty Pres. Jerry Falwell Posts Photo of Himself With Pants Unzipped Next to Scantily-Clad Woman in Mimicking Vile TV Show

Signs of the times…

The sad and current state of what passes for “Christian” leadership… 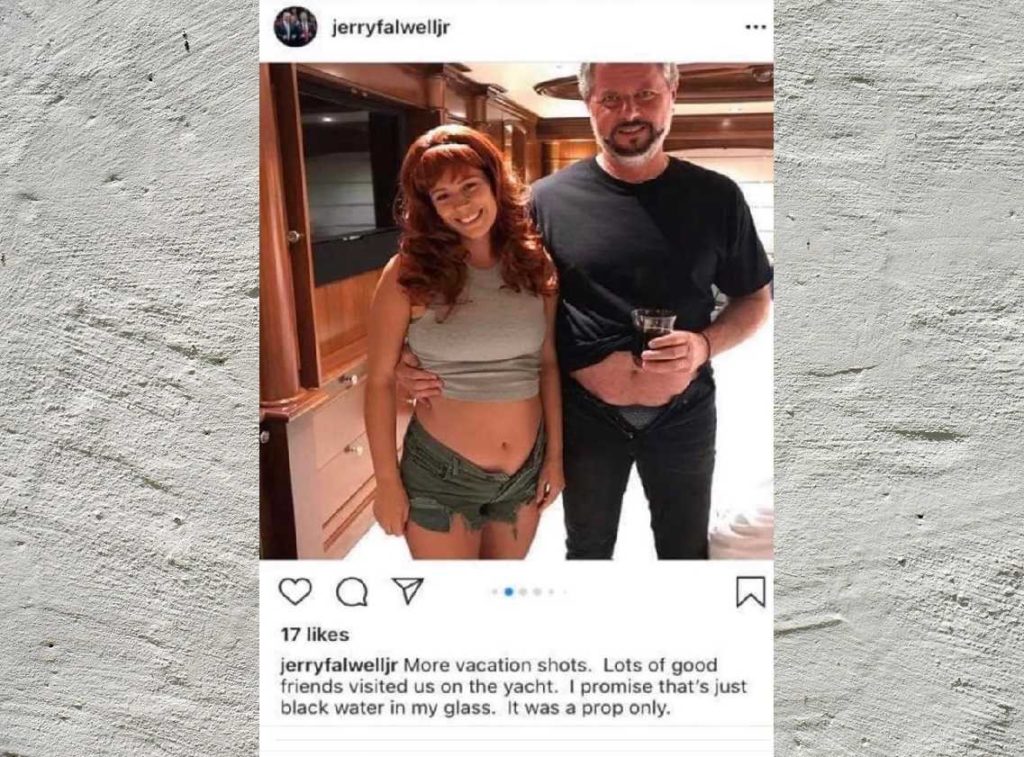 Jerry Falwell, Jr. in the photo above.

And these are the so-called “lights unto the world” leading lost souls to the Lord Jesus Christ? The pillars of leadership, the teachers of understanding the Scriptures, of being the salt of the earth and imitating the Lord Jesus Christ? And we wonder why the people of the world mock, scoff, ridicule, laugh at so-called Christians? And why these can’t “bring more people to Christ?” And if they do? Are they really transformed, truly born anew, new creatures unto the Lord by the power of the Holy Spirit transforming hearts, minds, spirits, and lives?

This is how the leader of a so-called Christian school lives and operates? This is the best use of his time and the example he could set?

This dear one is the lost, lying, caught with your pants almost down, the world of false Christianity, and false discipleship represented in our nation and around the world passing itself off as true Christianity. Bloated and arrogant from massive funds collected and egos blinded thinking themselves above sin, above it all.

Isn’t it ironic, in a very sad way, Mr. Fallwell, Jr. leads a so-called Christian school with the name Liberty?

It is very clear he does not discern correctly what the true meaning of the liberty given to those who are truly regenerated and born anew in the Lord Jesus Christ, as mentioned and defined in God’s Word. And he, from his example, imagines this liberty permits him to do as he desires, do whatever he wishes without consequences and he no longer can sin? He can do anything and sill be found pleasing and acceptable unto the Lord?

For, brethren, ye have been called unto liberty; only use not liberty for an occasion to the flesh, but by love serve one another.

For you were called to freedom, brothers. Only do not use your freedom as an opportunity for the flesh, but through love serve one another.

Abstain from all appearance of evil.

This is a leader in the Chruch? Leading young people in the ways of being a true disciple of the Lord Jesus Christ in the school he operates?

Abiding in and living the Word of God? Setting an example for others? Has he read and understand how teachers, how leaders in the Church are to be judged?

This is abhorrent, despicable, vile behavior. Not an imitation of such parodying a TV program — this is the real thing right here! And exactly what is the Christian POINT of parodying a TV program by imitating it? Why? Really? To what avail? What gain? And are we not to have a point, a purpose to our actions? Is not every deed, every word, every thought known by the Lord, and us to be judged accordingly?

Ask yourself in reading and viewing this — “Is this how and what I would want to be doing should the Lord return this very moment?”

Ahh, arrogant, bloated, lost Jerry Jr.! Why the pants down and behaving as you are? This is the example you set for others expecting anyone to believe you’re truly born again? Truly transformed by the Holy Spirit into a new man?

This is what the face of Christianity to this lost world is supposed to look like?

And we wonder why our nation is descending as it is? Why the massive erosion and corruption within the Church? Within our nation? Why the Church is filled with ministers of Satan and his false teachers these days rather than truly godly, fearing the Lord, exhorting in expository preaching about sin, hell, discipleship, and what it takes to take up the cross and follow the Lord Jesus Christ men?

What are we truly doing folks? Where is this light unto the world? The salt of the earth? The disciples of the Lord Jesus Christ? The truly born again by the transformation of mind and spirit by the Holy Spirit?

This is its example? This is what the unbelieving are to witness and then come unto the Lord?

What a lost, blind, awful, and worldly people we have become using the Lord’s name in vain! Oh, and judgments are to come, oh are judgments to come! And they already are, are they not dear ones?

The Sad and Lost Current State of What Passes For Christian Leadership — Liberty Pres. Jerry Falwell Posts Photo of Himself With Pants Unzipped Next to Scantily-Clad Woman in Mimicking Vile TV Show (Video)

Jerry Falwell, Jr., the president of what hails itself as the world’s largest Christian university, bearing the mission motto “training champions for Christ,” posted — and then deleted — a photo on social media in which he posed with his pants completely unzipped, standing next to a woman in very short ripped shorts with her shirt pushed up to reveal her midriff. Falwell and others were apparently mimicking the vile television series “Trailer Park Boys”, a Canadian-based show filled with profanity, alcoholism, drug use, sexual immorality and rampant ungodliness.

Falwell, who leads Liberty University in Lynchburg, Virginia, was reportedly on vacation and participated in the “Trailer Park Boys”-themed outing on a yacht. This is confirmed by a video, which was also deleted but downloaded by a polemics outlet before it was taken down, that shows Falwell and others re-creating the characters of the series. Falwell was the lead character, Julian.

The photo shared by Falwell represents Julian with the character Lucy, as Falwell holds a faux glass of alcohol and stands with his shirt rolled up and his pants completely unzipped. Lucy likewise has her shirt pushed up with short ripped shorts that are unbuttoned.

While it is unclear as to the meaning of the two posing in such a manner, according an outline of the television show, in the episode “[Expletive] Community College, Let’s Get Drunk and Eat Chicken Fingers,” at one point, “Julian remembers a drunken night with [Lucy] where he blacked out and woke up in bed with her the next day.”

Other episodes on the television show are titled “I’m Not Gay, I Love Lucy … Wait A Second, Maybe I Am Gay,” “Gimme My [Expletive] Money Or Randy’s Dead”, “Mrs. Peterson’s Dog Gets [Expletive] Up”, and “You Want The Lot Fees, [Sexual Vulgarity]”.

Falwell had written under the photo, “More vacation shots. Lots of good friends visited us on the yacht. I promise that’s just black water in my glass. It was a prop only.”

However, it was more than the glass that raised concern among those who saw the image, as they wondered why Falwell would pose with his pants unzipped.

As previously reported, Falwell is not new to controversy as last year, a former student at the university published an article that included photos of Falwell and his family at a nightclub in Florida.

Falwell seemed to initially deny that he had ever been at the club, responding, “There was no picture snapped of me at WALL nightclub or any other nightclub.”

However, when Falwell was provided a copy of one of the photographs from 2014, he asserted that it must have been Photoshopped.

“I never have seen the picture you claim is of me below. If the person in the picture is me, it was likely photo-shopped,” he asserted.

But Falwell later took to Twitter about the matter, contending to followers, “Just for the record, I never denied going into a club with my family to listen to music for about 30 minutes years ago. I only denied I asked anyone to scrub pics of me. I never knew of any pics until a week ago. DUH.”

He also called “hypocrites” those who expressed concern about a photograph with then-candidate Donald Trump in which a framed Playboy magazine cover was displayed in Trump’s office.

“Honored for same hypocrites who accused Jesus of being a friend of publicans and sinners to be targeting me over a decades old mag cover! TY,” Falwell tweeted.

This is a breaking news story and will be updated.