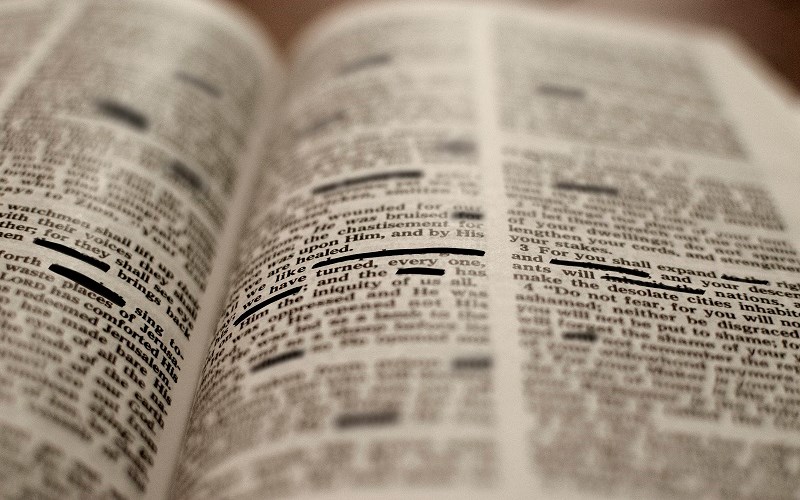 Some comments from the administrator of A Crooked Path precedes the article The Ongoing Campaign to Change God’s Word:

God’s & the Lord Jesus Christ’s holy, inerrant word — The Scriptures, the Holy Bible — cannot be redacted by man or woman. Any man or woman no matter what an individual, a denomination, an organization, a group, a government may think and want to either remove, add to, or alter.

The Word of God cannot be censored, redacted, altered, added to, or omitted from.

Who does any man, any woman, any denomination, any organization, and group, any government think they are to challenge the Word of God because they don’t happen to like, agree with, or believe what is contained in the Word.

And we now live in the age, the last of the last days on earth where few ever think about the Bible or read it but there is a massive and growing effort by individuals, groups, organizations, denominations, and governments to attempt to change God’s Word to suit their lusts, their selfish desires, their lack of understanding, their corrupted and perverted views and way of life.

No man, no woman, no group, no organization, no denomination, no army or movement or principality or government or power or desire on earth can ever change God’s Word.

Even though they imagine they are successful and all they are doing is leading millions to follow their lies told to them by the father of lies, Satan, to achieve his ends which are to remove, distract, keep and mislead as many people from the truth of the Scriptures and away from God, the Lord Jesus Christ, the Holy Spirit, and the truth and life contained in God’s Word while he and his minions, hos ministers have time knowing their time is swiftly running out.

Do not be among the millions deceived believing the lies and going astray, their own way rather than the way of the Lord, the way of life — eternal life.

For to believe and follow the lies and go that way only leads to death. The second death, the eternal death. And even though most want to change that truth in the Bible? No degree of their efforts or desires or their vain perceived ability to defeat God, defeat the Lord Jesus Christ, defeat the Holy Spirit, and defeat the Word of God will prevail.

God and His Word will prevail. For eternity.

While those refusing the truth and living the lies and working to change God’s Word will be in hell’s fire for their eternity.

If you don’t believe this? Get an approved translation of God’s Word and search it out for in the pages of every approved translation of God’s Word you will only find the truth, reality, past, present, and future history, and the meaning of life. Why you are here and what you ought to be doing as a result of finally discovering why you are here and what the real meaning of this life is!

That’s all contained in God’s Word.

I’m a big fan of questions.

As a journalist, a large portion of my job is asking the right questions, and then composing articles that include the answers.

The truth is – unique power and importance rest within the question.

The first question in history came from the Devil, Satan himself.

When God made the trees and mountains and rivers and oceans, and then placed Adam and Eve in that creation, He had only one rule:

You must not eat from the tree of the knowledge of good and evil (Genesis 2:17).

Satan responded to this command with that first question, the same question that is still being asked today, thousands of years later, and wreaking new havoc among humanity:

To this, Eve told Satan that they were permitted to eat of all the trees, except for the tree of the knowledge of good and evil. If they ate of that tree, they would certainly die. Satan countered this truth with a lie, the first of many he would tell men and women throughout history.

You will not certainly die,’ the serpent said to the woman (Genesis 3:4).

Satan’s initial attack on humanity was an attack on God’s Word. Did God really say that? Do you really believe what God told you?

Even thousands of years later, the enemy has kept to the same basic method of attack concerning the Word of God.

In Communist China, the attack is a blatant one. Authorities have changed the literal words of the Bible, labeling Jesus as a sinner.

In certain Chinese schools, a communist textbook is given to students that contains a completely fabricated version of the biblical story of Jesus and the adulterous woman found in John 8:3-11.

This is what the textbook says:

The crowd wanted to stone the woman to death as per their law. But Jesus said, ‘Let the one who has never sinned throw the first stone.’ Hearing this, they slipped away one by one. When the crowd disappeared, Jesus stoned the sinner to death, saying, ‘I too am a sinner. But if the law could only be executed by men without blemish, the law would be dead.’

In no way does it describe what truly happened. The real Word of God shows that Jesus did not condemn the woman, but released her after the crowd dispersed, telling her to “sin no more.”

The enemy understands the importance of God’s Word in our lives. It gives us encouragement, shows us who Jesus really is, and commands us to live a holy and righteous life before God. Naturally, the enemy hates all of these things and strikes right at the very cornerstone from which we draw our faith.

In America, the attack on the Bible is much more subtle, aiming to erode trust in the translation and meaning of Scripture. Movements exist, within the very church itself, to change certain passages in the Bible, intending to affirm homosexuality instead of opposing it as the true Scripture does.

Matthew Vines leads The Reformation Project, an organization that targets verses that oppose homosexuality, attempting to change their meanings and explain away their opposition to same-sex marriage.

And the men, instead of having normal sexual relations with women, burned with lust for each other. Men did shameful things with other men, and as a result of this sin, they suffered within themselves the penalty they deserved.

Vines says this passage isn’t talking about homosexuality in today’s concept, but rather the evil of lust instead, and therefore does not condemn homosexuality. He changes the meaning of Scripture.

Those who indulge in sexual sin, or who worship idols, or commit adultery, or are male prostitutes, or practice homosexuality…none of these will inherit the Kingdom of God.

In his teaching, Vines changes the meaning of these verses as well, claiming, “The concept of sexual orientation didn’t even exist in the ancient world,” concluding that these verses must not oppose homosexuality.

The agenda exists, very clearly, to undermine biblical authority and change the very Word of God. This strategy is an effective one, leading many in the church astray.

In September, a church in Georgia separated from the United Methodist Church, desiring to further support the LGBTQ agenda in America.

The church posted a letter to members of the LGBTQ community, apologizing for any wrong treatment, and stating that “We affirm whom you love.”

That original question asked so many years ago in the garden is still being asked today, except now it’s being asked from the pulpit.

According to James White, the answer to any challenge to Scripture is clear.

“We don’t have the luxury to edit what God has said,” White stated in an interview with American Family Studios for the recently released In His Image documentary.

Because if we’re able to discard the legitimacy of the Bible in one instance and change its meaning entirely, that erosion will not stop until the entirety of God’s Word is discarded.

This war upon Scripture is ancient and established, and will continue to rage in our churches and society for the foreseeable future. For this reason, it is absolutely imperative that followers of Jesus heed the instructions of Jude 3.

Defend the faith that God has entrusted once for all time to his holy people.

Always be prepared to give an answer to everyone who asks you to give the reason for the hope that you have.

The direction of our world and society is unmistakable – A strong defense will be required of anyone who follows Jesus Christ. Therefore, each Christian must be willing and able to defend the authority and veracity of God’s Word.

Questions are indeed important, and the body of Christ will continue to be questioned about what we believe and why we believe it.

We must be equipped with the truth of Scripture, and ready to respond to the most lethal question with the most powerful answer.

The word of the Lord endures forever.