The Marxist Roots of Abortion 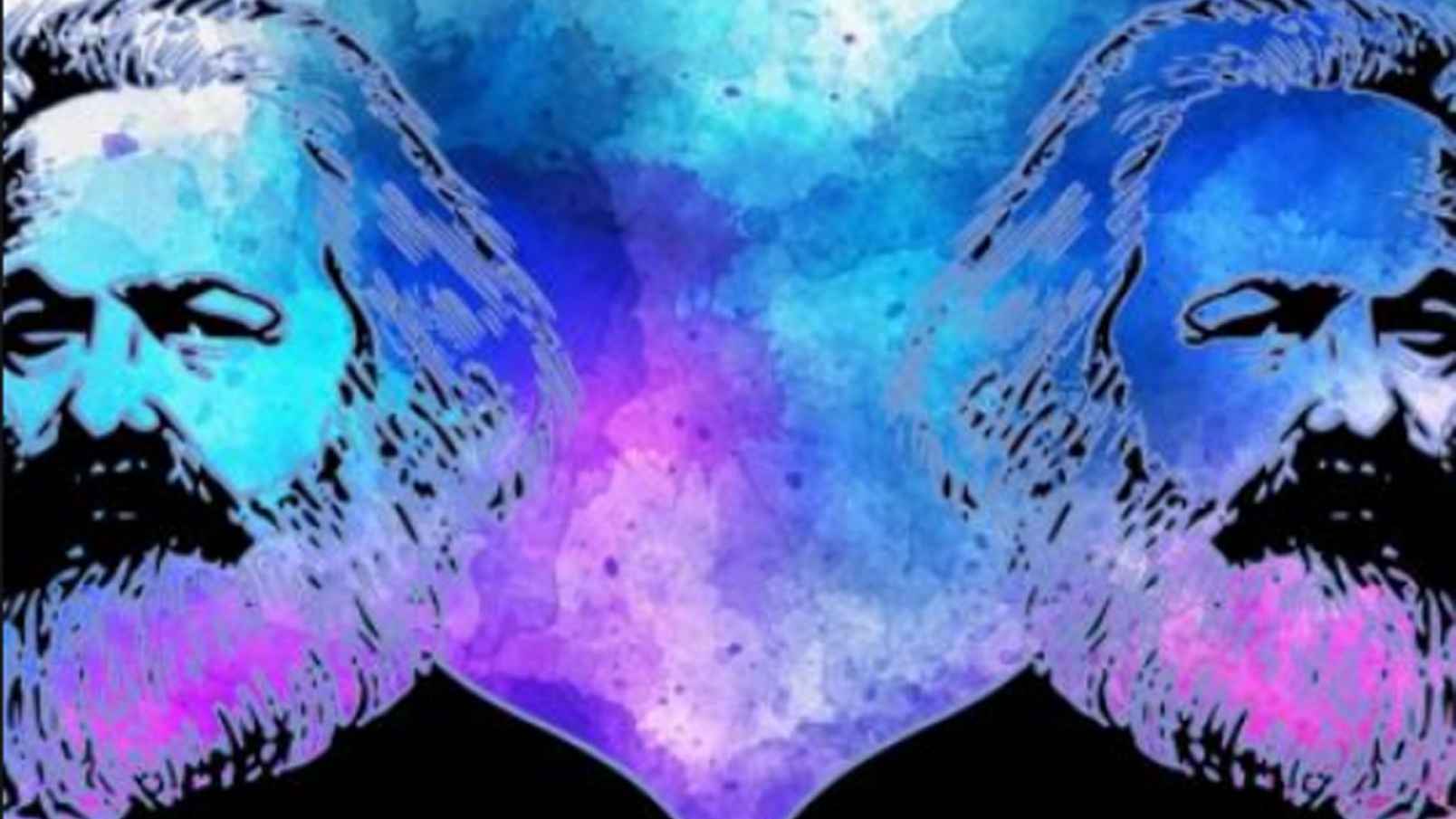 Secular writers, such as Mr. Joseph Hippolito in the article below know so much and write it down so well. Yes, the daily murder of babies, a.k.a. abortion is traveling along the path called Marxism by some, or following a godless ideology by others — but the slaughter of tens of millions of gifts from God the Creator by willful, sinful man and woman does not have its roots, its foundation in Marxism.

No, everything arises, comes forth, emanates from one of two sources.

Either from the clear, life-giving eternally flowing waters of God and His righteousness, truth, Son the Lord Jesus Christ and His inerrant Word and those who drink from that life-giving river or…

Those who are mired and covered in the dung of the fetid, poisoned cesspool of sin and lies put forth by Satan.

Each person either believes this or they do not.

Therefore, each person will be judged accordingly and held accountable for who, how, and what they believe and of which place they go to drink in what they do drink in daily.

Abortion, the murder of human children has at its core, its foundation pagan ritual and rites and practices of false gods and perverse and evil cultures and people.

Marxism influenced? Sure, but let’s not only go scratching the surface in all things.

Let’s thrust the blade in and strike to the marrow. Where it matters. Thrust into the heart of everything.

And there is no new thing under the sun.

No matter the words used, how many people support whatever, no matter the indoctrination or delusion.

There is nothing new.

We’re sinning as much, or more than any culture or people who have come before us.

And for this, we are known and there is an accounting and a judgment coming. And judgments will come along the way until the Lord can tolerate no more and the final judgment comes.

Well, you take the path you do believing what you do…

And let’s see how it all turns out.

And you know what? While you’re on that path of yours? Thinking mainly of yourself? And what you want? Satisfying as best you can your earthly desires, lusts, and not thinking on things above and denying heavenly, holy and the righteous things of God and His Word? I’ll be praying you find a pathway along your way to reroute, detour from where you’re headed and you walk along the pathway you need to in order to receive eternal life.

And if that concept and belief is alien? Doesn’t make sense? Not what you’ve been taught all these years?

Go, go get a good translation of a book called the Holy Bible. And open it. In your mind open to its potential truth in your life. Pray, even if you’ve never prayed before that if what you hold and read is true that your heart, your mind would discover its truth.

And see what happens.

And, I sincerely hope we meet up on the one path leading to heaven and eternal life one day…

Marxism? A terrible thing and sadly a mighty lost and sinful ideology that is growing among many people, but let us not get bogged down in such surface matters and go to the meat. To the marrow. To the heart of all things.

The sinful lost nature of men and women…

…and how any person in this sinful fallen state can come to the knowledge and way of God’s righteousness and salvation through holding and keeping the flame of faith alive and burning within their renewed transformed heart and life.

The Marxist Roots of Abortion

From Robert Bork to Clarence Thomas to Brett Kavanaugh, the Left delights in eviscerating any conservative Supreme Court nominee it deems a threat to Roe v. Wade. As Amy Coney Barrett waits her turn, the rest of the nation might wonder why legalized abortion plays such a massive role in the confirmation process.

The answer is simple. Abortion not only represents a massive block in modern feminism’s foundation. It also acts as a fundamental tactic in the Left’s strategy to reorganize American society along Marxist lines — especially now, with Marxism being rebranded as “critical theory” and “democratic socialism.”

“Women can never obtain real independence unless her functions of procreation are under her own control. The woman married to a worker finds in Voluntary Parenthood the same source of leisure and economic relief that her husband received through his labor union. To her, Voluntary Parenthood means the eight- or six-hour day, instead of the 12 or 16-hour day, which the mother of many children is bound to endure.

Now consider Chelsea Clinton’s remarks during a rally to support Roe v. Wade in August 2018: “It is not a disconnected fact … that American women entering the labor force from 1973 to 2009 added three and a half trillion dollars to our economy. Right? The net, new entrance of women — that is not disconnected from the fact that Roe became the law of the land in January of 1973.”

Marxists believe abortion liberates women from domestic and economic pressure by limiting the number of unplanned children. Such pressure comes from capitalist societies that use the nuclear family to exploit women and children as means of production. Women become no more than incubators and domestic servants. Lenin even called housewives “domestic slaves.”

“It is just for this reason,” Trotsky wrote, “that the revolutionary power gave women the right to abortion, which in conditions of want and family distress … is one of her most important civil, political and cultural rights.”

Support for abortion, therefore, reflects Marxism’s contempt for the nuclear family. None other than Karl Marx proclaimed in “The Communist Manifesto” that destroying the nuclear family was a fundamental goal.

Marxists also view abortion as part of their comprehensive strategy to give all child-rearing responsibilities to the state, making the nuclear family irrelevant, as Trotsky advocated in his book, “The Revolution Betrayed,” an extensive critique of the Soviet Union under Stalin.

“The place of the family as a shut-in petty enterprise,” Trotsky wrote, “was to be occupied, according to the plans, by a finished system of social care and accommodation: maternity houses, crèches, kindergartens, schools, social dining rooms, social laundries, first-aid stations, hospitals, sanatoria, athletic organizations, moving-picture theaters, etc. The complete absorption of the housekeeping functions of the family by institutions of the socialist society was to bring to woman, and thereby to the loving couple, a real liberation from the thousand-year-old fetters.”

Trotsky’s ideas inspire today’s Leftists, such as Johanna Brenner, a professor emeritus at Portland State University and a feminist who supports the Democratic Socialists of America.

“So what would we put in place of the family as we know it? I argue for the importance of building democratic caring communities,” Brenner said in 2017. “These, I think, are a more progressive grounding of relational life than family households — although I’m not opposed to family households being one part of such communities. Enlarging our affective bonds beyond a small circle, whether defined by blood and kinship or otherwise, is an essential part of any laboratory project.”

Black Lives Matter summarized Brenner and Trotsky bluntly in a statement the organization later deleted from its website:

“We disrupt the Western-prescribed nuclear family structure requirement by supporting each other as extended families and ‘villages’ that collectively care for one another, especially our children, to the degree that mothers, parents, and children are comfortable.”

Patrisse Cullors, one of BLM’s co-founders, described herself and fellow co-founder Alicia Garza as “trained Marxists” who “are super-versed in ideological theories.”

But Evelyn Reed personified the alliance between Marxism, feminism, and abortion. One of Trotsky’s supporters during his Mexican exile, Reed founded the Women’s National Abortion Action Coalition in 1971. In 1985, Reed wrote a paperback, “Abortion is a Woman’s Right!” Reed also reiterated Friedrich Engel’s views of the family in her 1970 article, “Women: Caste, Class or Oppressed Sex?”

“Women were then given two dismal alternatives,” Reed wrote. “They could either seek a husband as provider and be penned up thereafter as housewives in city tenements or apartments to raise the next generation of wage slaves. Or the poorest and most unfortunate could go as marginal workers into the mills and factories (along with the children) and be sweated as the most downtrodden and underpaid section of the labor force” (parentheses in original).

“I am for the abolition of the family. The family is the intermediary by which this patriarchal world exploits women,” wrote de Beauvoir, who exposed her fanaticism while fellow feminist Betty Friedan interviewed her in 1975. Friedan suggested that women who care for children full-time could receive government vouchers for that purpose.

“No, we don’t believe that any woman should have this choice,” de Beauvoir replied. “No woman should be authorized to stay at home to raise her children. Society should be totally different. Women should not have that choice, precisely because if there is such a choice, too many women will make that one. It is a way of forcing women in a certain direction” (emphases added).

Contemporary scholar Christina Hoff Summers recognized the ramifications while criticizing de Beauvoir in her book, “Who Stole Feminism? How Women Have Betrayed Women.”

“Though she does not spell it out,” Summers wrote, “she must have been aware that her ‘totally different’ society would require a legion of Big Sisters endowed by the state with the power to prohibit any woman who wants to marry and stay home with children from carrying out her plans.”