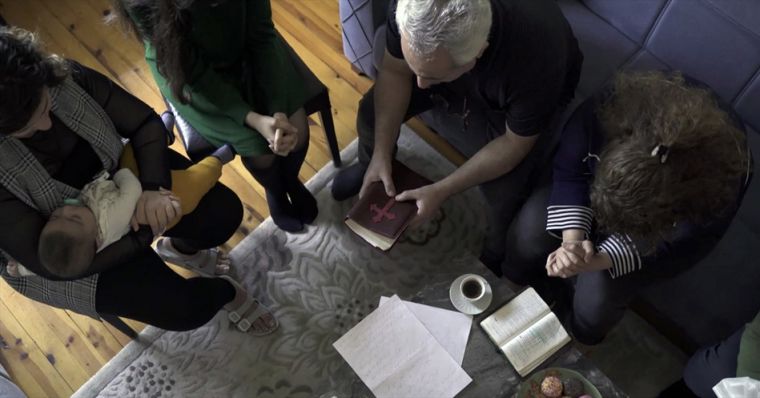 By Open Doors U.K and Ireland

Taher is a Christian convert who lived in one of the most oppressive nations in the Middle East – it is not even possible to name his home country for security reasons. He was caught sharing his faith and could have gone to prison, or worse. But God intervened.

He is one of three Christians, persecuted for their beliefs, who will share their incredible stories at Open Doors’ free online event, Standing Strong Live 2021 on Saturday, September 25.

Taher scratched the words on the cold wall of his prison cell.

He hoped the Bible verse from Matthew 7:7 would encourage others who would find themselves locked away in the cell after him.

Taher had quietly slipped the pen into his pocket after his interrogation that night.

Just days before, the secret police had forced their way into his home and ransacked the house he shared with his wife Donya and daughters Farah and Arezoo.

They had handcuffed him and wrapped a blindfold around his face before driving him away.

“Right then and there, I felt Jesus beside me,” says Taher, whose family had been practising their faith in Christ in secret. From a closed country in the Middle East, as a Christian he risked being branded an ‘enemy of the state’ if his faith was discovered.

Now, arrested and imprisoned, he was facing interrogations every night between midnight and 4 a.m. as well as at different intervals throughout the day.

“What do you do when you meet with other Christians?”

“What songs do you sing?”

“What organisation do you work for?”

“What are the names of all the other Christians you know? Write down their names.”

The secret service eventually released Taher on bail. During his sentencing, the judge let him go on one condition: he should stop evangelising.

If authorities arrested him again, the judge would have no leniency, and the conviction would be execution.

Taher says: “In a preliminary hearing they sentenced me with apostasy and turning away from my religion.

“Donya and I both agreed that we would continue on this path until the end. We prayed together and we were strengthened in the Lord.

“I was going to accept and embrace any sentence the judge was going to give me. I also knew that the Lord’s plans are beyond our comprehension, so I sat in peace in the courtroom.

“After a while the judge said, ‘I don’t know why, but I want to take you out of the whale’s and lion’s mouth’.

“It was very interesting for me, because the whale and the lion’s den are mentioned only in the Bible.

“That is how I knew that God was acting in that moment.”

After Taher was released from prison he continued to minister to fellow Christians. Eventually, however, the situation became too dangerous for him and his family.

The secret police followed them everywhere. He was unable to find a job and the regular harassment became overwhelming.

Taher and his family decided to leave and are now living in Turkey as refugees.

Despite the sadness of having to leave his homeland, Taher says: “When I remember that I am part of God’s family and that He did not deprive us of anything – and all I have is not mine, but His – I remember that I shouldn’t be upset to lose it.”