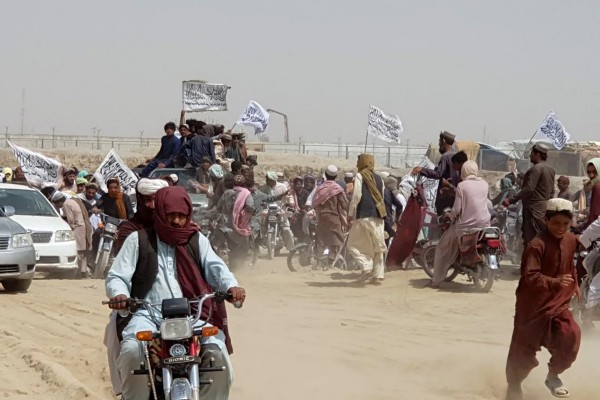 Boy, that 20-year war in Afghanistan against the Taliban, all the bloodshed, the loss of life, the tens of thousands suffering the loss of limbs, brain damage, changed lives forever, and the trillions of wasted dollars, all the bribes, all the lies, all the physical pain, and emotional pain, the spiritual dearth, the void of truth really paid off didn’t it? The Taliban, Islam is stronger at the end of the longest, grandest, most wasteful war in American history than it was at the beginning back in 2001 (photo caption was not in the original article and is provided by the administrator of A Crooked Path).

Having captured key districts and border posts with Iran, Pakistan, Tajikistan and Uzbekistan, the Taliban are now hunting for women in these areas. “All imams and mullahs in captured areas should provide the Taliban with a list of girls above 15 and widows under 45 to be married to Taliban fighters,” read a letter issued in the name of the Taliban’s Cultural Commission for Islamic preachers in the region. The Taliban has promised to marry these women to their fighters and take them to Pakistan’s Waziristan. There, these women will be converted to Islam and reintegrated.

Is anyone talking about the consent of the women involved? No. They are just getting a list of women who belong to the preferred age bracket – the reproductive age bracket, to be precise – and will take them as “wives,” or so they say.

The marriage is eyewash. The Islamic jihadis are only claiming women as war booty from their captured regions. These women will then be treated as sex slaves to satiate the Taliban men and reproduce a fresh crop of Islamic jihadis. It is concerning that despite the demand of the Taliban being published by newspapers all over the world, no feminist pop culture figure or woke society icon has taken to social media to condemn this demand for women in the captured and controlled areas poised by the Islamic group. Do they not see pernicious patriarchy in this monstrous ritual of taking clusters of women as war booty? This debauched act, continuing for the past 1400 years, is making inroads in the modern and woke 2021. Congratulations.

During the Taliban rule in Afghanistan before 2002, girls were banned from going to school, women were barred from working outside, and were not allowed to step out of the home without a male relative. Violators were penalized publicly and often lashed by their religious police.

Elderly Afghanis fear that the Taliban will again take away their daughters and turn them into slaves. “Since the Taliban took over, we feel depressed. At home, we can’t speak loudly, can’t listen to music and can’t send women to the Friday market. They are asking about family members. The [Taliban] sub-commander said you should not keep girls over the age of 18; it’s sinful, they must get married,” cries Haji Rozi Baig, fearing that her daughters, aged 23 and 24, will be the next victims of the Taliban.

It is customary for Islamic jihadis to hoard sex slaves, and the Taliban are not doing anything contradictory to the ideology they follow and are striving to globalize. Child brides and windows trapped as sex slaves are common in their world. Half of all girls in these regions are married by the age of 15, many are sold to the Taliban by their parents to make a quick buck. Taliban have also routinely abducted women from Uzbek, Tajik, Hazara and other ethnic minorities, to be traded and taken as sex slaves. Some women are also sold to wealthy clients in or outside Afghanistan, some are sent to Pakistan to be sold to brothels, and others are kept at al Qaeda training camps. There’s another section of women who are married off to Taliban fighters, but the pseudo-marriage does not negate their status of being sex slaves; they are left entirely helpless to be dishonored and then discarded.

It gets worse for these young brides after their jihadi husbands are killed in terrorist activities or clashes with the forces. Abandoned by society, these widows are forced to marry the next Taliban fighter in line, or just left to be raped regularly and repeatedly by the cousins, brothers or companions of the dead husband.

The children from the previous marriage are not spared, either. The girls, as young as four years old, are sold off to other jihadis to carry the legacy of her sex slave mother. Young boys are trained in operating weapons, taking off heads, and grow up as they succeed this generation of jihadis.

Speaking to Reuters, a 26-year-old widowed sex slave said, “They (Taliban) plan to send both of my sons to Pakistan to participate in jihad… They take my elder son for religious indoctrination and training to become a militant like his father.” The local government extends no help to rescue these sex slaves caught in a precarious position and compelled to spend their lives as sex slaves. Their children have no way out of this vicious trap, either. And that’s how jihad begets jihad.