Taking Back Education — By Alun Ebenezer 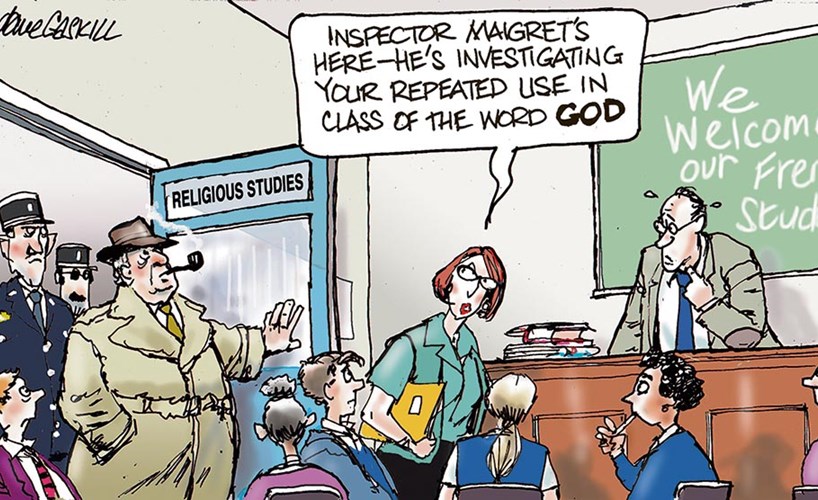 According to Nelson Mandela, “education is the most powerful weapon to change the world.” I wouldn’t completely go along with Mr. Mandela, I agree that education is powerful in shaping our culture and the way we think and behave. Church history is littered with Christians establishing schools and seeking to impact education. Whether you consider the Reformers, or Thomas Charles of Bala in Wales, or Spurgeon, or Lord Shaftesbury and the Ragged schools in London, or Thomas Chalmers providing schools for children in Scotland, there is a strong tradition of Christians recognising the important part schools play in “training children in the way they should go.”

That is one reason why so many Christians today are worried that what their children are taught in schools flies in the face of biblical Christianity and are frightened of the ungodly influences that surround our young people. But instead of simply bemoaning how bad things have become or accepting that this is just the way things are now, why don’t we do what our forefathers did and seek to bring about change by taking back education and building schools on the Christian faith?

But what would these schools be like? Along with Christian values impacting every area of school life, they would proclaim the message of the Bible and present the pupils and staff with the claims of the Lord Jesus Christ. This would be done explicitly in assemblies. Many may well reject the Lord Jesus Christ and show no interest in him, but at least they would be introduced to him during their time at school and if they ended up in a lost eternity, they would have to push past a crucified Saviour to get there.

As well as assemblies, young people would be made aware of what Christianity and the Bible have to say, through the school’s curriculum, in every subject, including religious education, science, and personal, social, health, citizenship and enterprise education (PSHCE).

There might be different types of Christian Unions in each year group, one for those interested in Christianity or wanting to engage and debate, the other for young Christians who want to study the Bible in more depth. These pupils would be encouraged to join local Bible believing churches and attend Christian camps and conferences.

The school would have a chaplain who would work with the pupils, staff and parents. He would lead assemblies, run Christian Unions, draw alongside pupils and staff, and teach each week about Christian doctrine and ethics. At Christmas and other times during the school year, he would have the opportunity to preach to children, parents and staff. In most schools that would be over a thousand people. Imagine that happening up and down the country!

How could schools like this get away with being so unashamedly biblical in today’s climate? It comes down to how they teach, as well as what they teach. Such schools would expose their pupils to what Christians believe, but not force them to believe it. The schools would create an environment that encourages thinking and questioning.

There is absolutely no place in schools for brainwashing or extremist views to be forced upon young people. Schools should be transparent, with nothing to hide or be ashamed of. Ofsted (1) and the Department for Education would always be welcome at these schools and could speak to whoever they liked, look at whatever they needed to, and do it all whenever they wanted to. They would be confident under such a spotlight. The Lord Jesus taught openly (Mark 14:48-49), and, far from brainwashing people and forcing them to believe certain things, he asked over 150 questions in the New Testament, always encouraging people to question and think. He had nothing to hide and urged his followers not to teach secretly, but openly. The apostle Paul said that he was “not ashamed” of the Christian message (Romans 1:16). If what we are teaching children cannot be inspected, then we shouldn’t be teaching it.

But it is the role of education and the core purpose of schools to make students think and question. Surely this is preferable to having society’s views and biases forced on young people; to be told that what we have decided on today is right and every generation has got it wrong; that certain arguments and views are not even allowed to be put on the table?

Education shouldn’t dictate what a young person thinks. The man voted the greatest Briton ever, Winston Churchill, said: “True genius resides in the capacity for evaluation of uncertain, hazardous and conflicting information.” The current bias against creation, for example, flies in the face of this. No student or teacher should feel inferior for holding the view that, “In the beginning God created the heavens and the earth.”

As well as encouraging pupils to think and question, Christian schools would have a duty and responsibility to be excellent. The reason why many schools with a religious designation have failed is because, quite frankly, they weren’t good enough. They set up a school simply as a vehicle to promote their faith. Christian schools must pledge to be among the best schools in the country. If Christians want to impact education, then we have to be taken seriously.

Whilst these schools would be built on the Christian faith, they would be for everyone, not just Christians. They would be lights on hills not monasteries and convents. Young people from all backgrounds would be welcome. They would be the schools of choice for families with the means to go private as well as the country’s most vulnerable children who live in social and economic deprivation. Children from all faiths and no faith and from every nationality and culture, all rubbing shoulders with each other.

Everyone would be welcome, loved and respected, but all fully aware and respectful of the principles the school is built upon and what they are coming to.

But how can we make this happen? Well, there is already such a school in London called the Fulham Boys School (FBS) which, encouraged by the government, has now become a Multi-Academy Trust. This means they are able and keen to help local groups of Christians with a desire to have a Christian school in their area to set up a similar school to FBS. All this totally funded by the government!

It is hard to imagine — lots of schools founded on the Christian faith, open to all, committed to excellence and standing up to the most intense scrutiny, with thousands of young people and their families, up and down our land, hearing the claims of the Lord Jesus and exposed to the teaching of the Bible. But as Hudson Taylor once said, at first it seems impossible, then it’s difficult, then it’s done. Our prayer is that God will lay it on the hearts of groups of Christians to set up these schools, raise up Christian teachers to teach at these schools and give families and children the desire to attend these schools. And under God, these schools may be used to turn this nation upside down.

(1) The Office for Standards in Education, “Ofsted,” is the body responsible for inspecting schools in England.