Anyone not believing we are living in the Biblical time of Romans 1 and Isaiah 5:20 needs to pull out a dictionary and look up the TRUE MEANING of “tolerance.” I’ll make it easy for one and all;

“Tolerate,” according to the Oxford Dictionary:

The world, the militant fascist homosexual movement, liberalism today will not tolerate God, Jesus, the Holy Spirit or the Scriptures. They will not ENDURE the truth. Or anything that disagrees with their evil agenda. The world, the militant fascist homosexual movement, and liberalism today are not interested in “equality” or “rights.” They are only interested in propelling their ideologies above, superior to longstanding preexisting foundations, values and standards. They work relentlessly to either abolish true Christianity or else work to corrupt and pervert it within the church to make it unrecognizable with Scripture and nothing more than just another worldly organization of lost sinners.

And every nation, every people are walking about dead within. Scales over their eyes, chains around their spirits and souls, Satan and his ministers holding their minds in their rotted evil hands. All falling in lockstep with the perverted, sinful agenda put forth by the Evil One, the sexually immoral, the sexually deviant going against God, nature and the inerrant infallible living and active Word of God — which is eternal. Which will prevail. Which will not be removed, corrupted nor destroyed no matter the gains evil may make, the millions the Evil One and his minions and minsters misled and enslave in their lies and utter darkness devoid of any truth.

We are told we need to possess “tolerance” and that we’re “intolerant,” but we are to never tolerate or capitulate to sin. To evil.

As the world does. The world twists, distorts and perverts the definitions of words to suit its purposes. Do not be deceived dear ones. We are not to treat evil as evil treats us, we are not to fall prey to the definitions of the world, the ideologies of the world. The perverseness of the world. We certainly disagree with, or ought to since it goes against God and Scripture, the practices of homosexuality, sexual immoralities, perversions and deviancies — but let us not stand against such with hatred. Let us use the Scriptures, prayerfully, seeking discernment, the words and ways to go about being an example, teaching the truth, asking the Holy Spirit to give us the words, the opportunities — always turning to and having the words of God from His Word in our speech, in our writing when in this ongoing escalating spiritual war.

We are to judge and test all spirits. All things. If they are truly of God or not. What is taking place in governments and institutions worldwide is NOT attempting to establish equality for the sexually immoral, sexually deviant and sexually depraved which go against the Scriptures — but they are working to establish SUPERIORITY of such and to make any words of truth spoken, any words of truth written a crime punishable by law. It is the removing of being able to speak the truth, write the truth, let the truth be known.

Do not be deceived. And the silence, the ignorance, the blatant lies and foolishness of the majority over the past 20 plus years have permitted this to occur.

Standing firmly, boldly in the truth of God’s Word is what we all ought to be doing daily, continually. Bible-centered, Bible-focused, Bible-reading and teaching. God-centered. Jesus-centered. Holy Spirit-centered; not of this world centered appeasing, more concerned about not offending evil, lies and all that which is of the world going against God and Scripture.

We, instead, ought to be living examples of the Holy Spirit indwelling us. Jesus Christ in us and we in Him. That does not mean passive, silent, agreeable to evils ways and lies. We are to boldly go before the throne of God. Boldly live as disciples of Jesus Christ. Not become complacent or capitulate to sin or this worlds lies, darkness and turn from God, Jesus, the Holy Spirit and the Scriptures.

The Evangelical Alliance says “it is questionable to extend the Penal Code only for a specific group of people”. The next socio-political debate around the corner is the ‘marriage for all’ law.

63% of voters backed in a referendum on Sunday 9 February the inclusion of sexual orientation in the law that punishes hate crimes in matters of race, ethnicity and religion.

Despite differences between the big cities (where the “yes” won clearly) and rural areas, a majority supported the move of the Swiss Parliament, which had already passed a modification of the Article 216bis of the Penal Code.

As it happens often in Switzerland, the referendum, which also asked the population on a second unrelated issue, had a low turnout: 41%.

Around 37% voted against changes in the law, a position shared by the right wing Swiss Popular Party (the biggest force in parliament) and the small evangelical party EDU. They had called to top what they described as a “censorship law” that could put freedom of speech at risk. 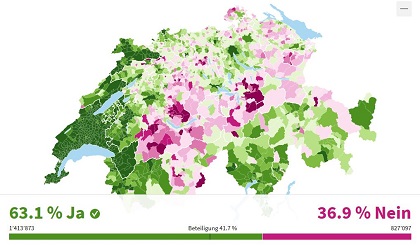 Votes by municipalities in the Februrary 2020 referendum on inclusion of sexual orientantion in Article 216bis of the Swiss Penal Code. / Graph: Tagesanzeiger

“MORE PRESSURE” ON THOSE WHO DISAGREE

Among the civil society groups that had warned against giving special protection to members of the lesbian, homosexual, bisexual and transgender community was the Swiss Evangelical Alliance (SEA).

“Hate is not tolerable in any form and against any person. But freedom of expression and religion must be preserved even under the tightened criminal law”, the evangelical body said in a statement published after the outcome of the referendum was known.

The SEA said “we hope that the expectations of better protection for sexual minorities are fulfilled”, but insisted that the “protection for all people in Switzerland was already guaranteed without this extension”.

Now the SEA says fears the change in the law “will put more pressure on people who, on grounds of their religion of conscience, who want to express a critical approach in relation to certain sexual orientations or do not want to provide certain services”.

“Even today values of Christians such as the protection of life and other ethical questions are fought with intolerance and even violence”.

Now that the changes in the Penal Code have been passed, the evangelical body demands that the law continues to be applied in a “reasonable” way.

After celebrating the victory, lesbian, homosexual, bisexual and transgender groups announced that their next aim was to see a “Marriage for all” law passed, giving same-sex partners the same rights as heterosexual marriages. One controversial issue could be the adoption of children.

The upcoming debate about the re-definition of marriage should be held in a context of “freedom and respect”, the SEA added, a with social conversation that is “fair and based on facts”.

“After all, our democratic country is characterised by allowing and integrating different opinions – and it should remain that way”, it concluded.