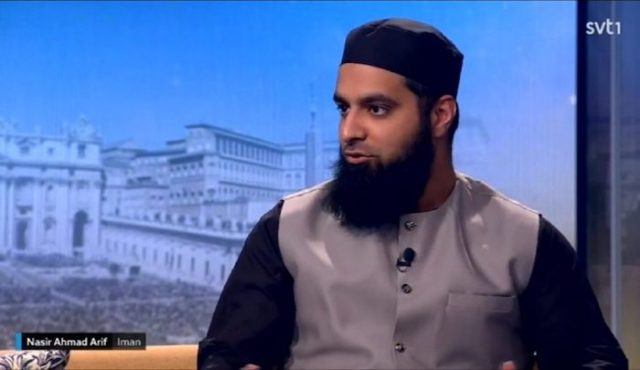 This is great. Who would know better about the true meaning of Easter than our new overlords? Now when will SVT (Sveriges Television) have on a Lutheran pastor to discuss the significance of Ramadan? What’s that? That would be “Islamophobic”?

Of course there is no reason why the imam Nasir Ahmad Arif couldn’t be an expert on Christian holidays. One need not adhere to a faith to be knowledgeable about it. But SVT didn’t invite him on because he was knowledgeable; it is unlikely that they made any attempt to determine beforehand what he knew or didn’t know about Easter at all. He was invited on because he is an imam, and his presence shows that SVT is “inclusive,” committed to “diversity,” and opposed to “racism.” Islam teaches that Jesus was not the Son of God and did not rise from the dead, and that only unbelievers (Qur’an 5:17) who are under Allah’s curse (Qur’an 9:30) believe he is divine? What does SVT care about any of that?

STOCKHOLM On Easter Eve, a teacher from Cordoba School, Imam Nasir Ahmad Arif, was invited onto SVT’s Helgstudion to comment on the Christian holiday of Easter. Cordoba School has previously been revealed to offer gender-segregated physical education. In reports to the Swedish Schools Inspectorate, the school has also been accused of several Islamist elements in activities such as small children with a veil and girls at the back during prayer, as Nyhetsbyrån revealed.

When SVT’s Weekend Studio on Easter Eve was to discuss the Christian holiday, the significance of Easter, they invited the Archbishop of the Church of Sweden Antje Jackelén – and a Sunni Muslim imam, Nasir Ahmad Arif. Mats Nyström wanted to know what Easter meant to the two invited guests.

– It is the biggest holiday of the year, Jackelén said.

– We celebrate that Jesus went the way from life, to death and the way to new life. Christ is risen.

What do you do for similar things?, Nyström wondered, addressing Imam Arif.

– Aashura. We also remember that day. So that’s something we recognize, Arif replied, referring to the Pesach of Judaism. Aashura is a holiday celebrated in memory of an imam who died as a martyr in a bloody battle in Karbala.

Imam Nasir Ahmad Arif is active at the Aysha mosque in Stockholm. He is also a teacher of Islam and responsible for the work of values ​​at the Muslim Cordoba school.

When Svenska Dagbladet conducted a review of Muslim independent schools in Sweden, Cordoba School was one of the schools that offered gender-segregated physical education when the newspaper’s reporter, under the pretense of being a parent, called and asked questions.

In 2020, Nyhetsbyrån’s Isabelle Eriksson conducted a comprehensive review of the Cordoba School and its links to Saudi funding. The school had reported to the Swedish Schools Inspectorate and the reports talked about how extreme interpretations of Islam were spread at the school, how the children were separated during the prayers (girls at the back, boys at the front), pronounced religious elements in the education and little girls who wore veils.

Following the reports, the Swedish Schools Inspectorate carried out a targeted inspection in October 2019. This did not lead to any measures being taken against the school.

Member of Parliament Hanif Bali (M) wrote ironically about how it was “good” of SVT to invite the imam.