States have mandated vaccinations since long before COVID-19 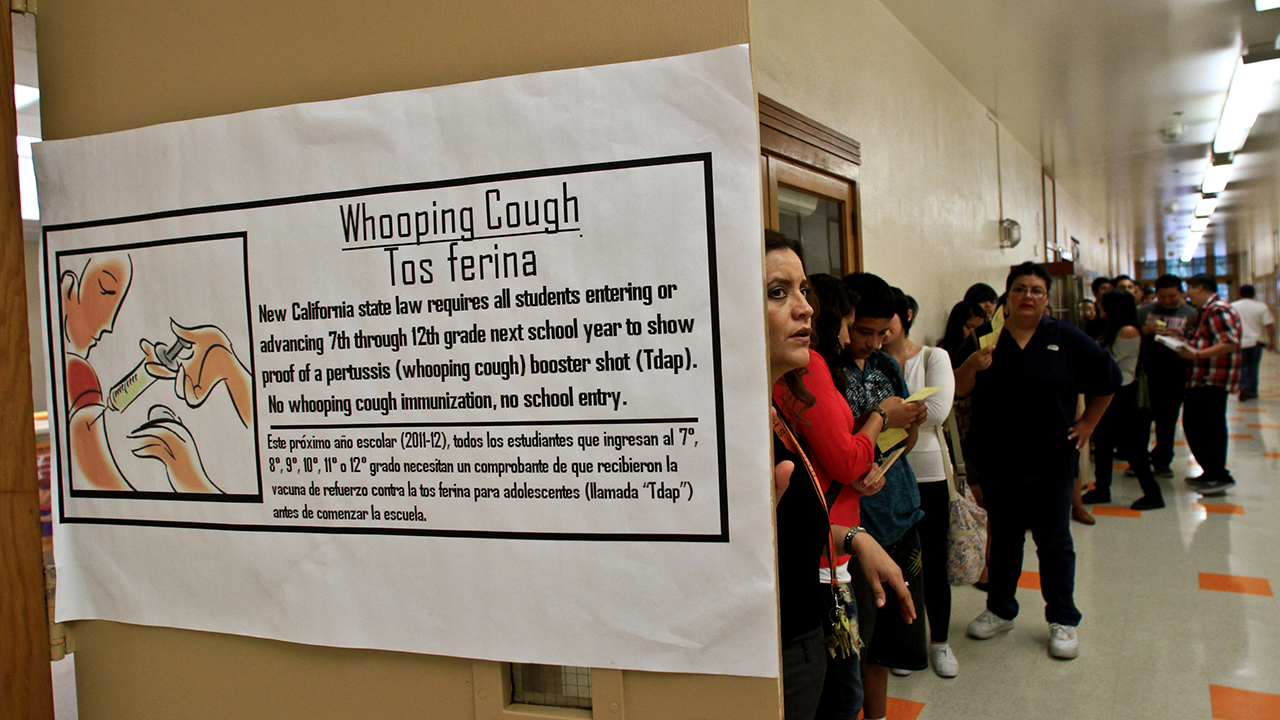 HUNTINGTON PARK, CA, July 06, 2011 ; Students who have already received whooping cough vaccine wait in line to submit proof of immunization at the nurse’s office at Huntington Park High School on Wednesday morning. Thousands of Los Angeles area students, who began school Tuesday at campuses on a year-round schedule, had not met the deadline for getting the mandatory whooping cough vaccine, providing officials with a glimpse into what could confront them in the fall. The 8,700 Los Angeles Unified School District students who faced Tuesday’s deadline were those attending Bell, Fremont, and Huntington Park high schools as well as Gage Middle School in Huntington Park and Ochoa Learning Center in Cudahy. (Photo by Irfan Khan/Los Angeles Times via Getty Images)

States have mandated vaccinations since long before COVID-19

Many Republican governors reacted furiously after President Joe Biden said he would require employees at large businesses to either get vaccinated against COVID-19 or submit to weekly testing. But Republican- and Democratic-led states alike already require hundreds of thousands of their citizens – infants, toddlers and schoolchildren, mostly – to be vaccinated against a panoply of diseases. In fact, mandatory childhood immunizations have been a feature of American society since the 19th century.

Currently, the Centers for Disease Control and Prevention’s Advisory Committee on Immunization Practices recommends routine vaccination against 16 diseases from birth through age 18. The CDC recommendations, in turn, inform individual states’ vaccine mandates: Typically, children who haven’t received the required shots for their age can’t attend school (public, private or parochial) or enroll in child care programs, though there are exemptions for religious, medical or other reasons.

How we did this

Under Biden’s plan, all companies with more than 100 workers will have to either require their employees be immunized or undergo weekly testing. Biden also acted to mandate shots for federal contractors and most federal workers, and expanded a previously announced vaccine mandate for nursing-home workers to cover virtually all health care workers.

Some states already mandate certain vaccinations for specific categories of adults. New York, for example, requires that all workers in hospitals, nursing homes and other health care facilities be immunized against measles and rubella. Rhode Island requires child care workers to not only be immunized against several common childhood diseases, but to get an annual flu shot, too. Several states have specific vaccination mandates for college students.

But in the main, most vaccine mandates apply to children and teens. We studied state laws, regulations and information from state health departments to assess how widely mandated the CDC’s vaccine recommendations are.

Of the 16 immunizations the CDC recommends for children and teens, all 50 states (plus the District of Columbia) mandate diphtheria, tetanus, pertussis (whooping cough), polio, measles, rubella and chickenpox. In addition, every state except Iowa mandates immunization against mumps. (The diphtheria, tetanus and pertussis vaccines usually are given as a single combined shot, as are the measles, mumps and rubella vaccines.) Except for the chickenpox vaccine, which became available in the United States in 1995, all those vaccines have been around for 50 years or more.

Among newer childhood vaccines, though, state mandates are something of a mixed bag. Only two states (Alabama and South Dakota) don’t require vaccination against hepatitis B at some point in a child’s life, but about half (24) don’t require it for hepatitis A. Just six states – five of them in the Northeast – require annual flu vaccines for child care or preschool enrollment, and none do so for K-12 students.

Three vaccines – against rotavirus, pneumococcal disease and Haemophilus influenzae type b, or Hib – typically are recommended for children younger than 5 years old. (Hib, despite what its name might imply, doesn’t cause the flu, but it can cause a range of other ailments, from mild ear infections to potentially deadly meningitis and blood infections.) However, while all but four states mandate the Hib vaccine for daycare or pre-K, 10 don’t require the pneumococcal shot, and only eight require immunization against rotavirus.

The remaining two vaccines, against human papillomavirus (HPV) and meningococcal disease, are recommended for teens and older children around age 11 or 12. A majority of states (33, as well as D.C.) require the meningococcal vaccine, although Massachusetts is phasing in its requirement and Vermont only requires it for students living on campus. But only D.C., Hawaii, Rhode Island and Virginia require the HPV shot, which protects against cervical and other cancers but has been controversial because HPV is transmitted sexually.

Vaccination mandates in the U.S. date back to the 19th century, when many cities and states started requiring children to be immunized against smallpox; the Supreme Court upheld such mandates in a landmark 1905 decision. A combination vaccine against diphtheria, tetanus and pertussis became available in 1948, and it was quickly added as a routinely recommended shot.

In 1977, the World Health Organization’s Expanded Program on Immunization set a goal of giving every child in the world access to immunization against six diseases by 1990: dipththeria, pertussis, tetanus, polio, measles and tuberculosis, or TB. (Infants and small children are commonly vaccinated against TB in countries where the disease is prevalent. In the U.S., however, only children who are specifically at risk for contracting TB – or adults in high-exposure settings, such as health care workers – are offered the shot.)