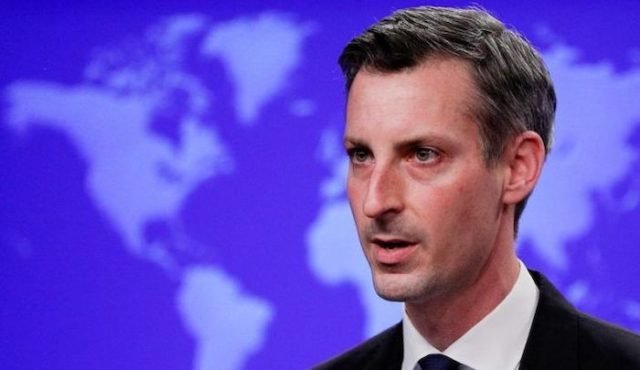 Obama made the same claim many times, but it’s fictional, just another example of the left’s relentless Islamopandering. Arab Americans’ contributions to the US are as old as America itself? Really? There were Arabs at Jamestown? In the Massachusetts Bay Colony? At Roanoke? Ned Price’s statement is so wildly ridiculous that it doesn’t just invite parody; it pleads for it. Remember the Arabs among the Founding Fathers, Yahya al-Adams and Iskandar Hamilton? Remember the Arabs who told James Madison about Muhammad’s Constitution of Medina so that he could lay out the foundations of a republic in the U.S. Constitution? Remember the Arabs who fought so valiantly in the Revolutionary Jihad, and the Jihad of 1812, and the Mexican Jihad, and the Civil War, aka the Jihad Between the Caliphates? Remember all the controversies about whether Muslim soldiers in the Civil War could make sex slaves out of the wives and daughters of Confederate commanders? The jihad suicide attacks that broke the Germans’ will to fight on during World War I?

Price didn’t mention the real contributions Arabs have made to our nation: you know, like rearranging the New York skyline, transforming government buildings into grim, nervous fortresses, making air travel into the exercise in annoyance and humiliation that it is today, and draining the American economy with two futile wars and hundreds of billions spent on security and counterterror initiatives.

(CNN)The culture of Arab Americans will be honored this month, with the designation by the State Department of April as Arab American Heritage Month, reflecting the group’s contributions to the U.S. “are as old as America itself,” a spokesman said.

“The United States is home to more than 3.5 million Arab Americans representing a diverse array of cultures and traditions. Like their fellow citizens, Americans of Arab heritage are very much a part of the fabric of this nation,” Ned Price, a spokesman, said in a video statement on April 1.

“And Arab Americans have contributed in every field and profession, many of them, in fact, serve here at the State Department and throughout the interagency.”

Advocacy groups say this is the first time the State Department has designated a particular month for Arab American Heritage Month. States that have recognized April as Arab American History Month in 2021 and years past include Arkansas, Hawaii, Michigan, New York, North Carolina and Virginia.

Arab Americans trace their origins to 22 Arabic-speaking countries in the Middle East and North Africa. Arabs began immigrating to the U.S. in the late 1800s fleeing war, persecution and economic hardships, according to the Migration Policy Institute. California, New York, Michigan and Illinois have the largest populations of Arab American residents in the country, based on data from the 2015-2019 ACS Ancestry survey.

While the State Department made this announcement, Arab American History Month is not officially recognized by the entire U.S. government. A bill sponsored by Rep. Rashida Tlaib, a Michigan Democrat, was introduced to Congress in 2019 and is still pending.
Advocacy groups such as the American-Arab Anti-Discrimination Committee (ADC) and the Arab American Institute (AAI) have been advocating to get April designated as a month to celebrate Arab Americans for two decades.

“This is a breath of fresh air,” said Samer Khalaf, president of the ADC, about the State Department’s move. “It will give the community a sense of pride and it’s a chance to show what the community is all about, to educate people and dispel stereotypes.”

Maya Berry, executive director of the AAI, sees the recognition as a high-level opportunity to celebrate Arab American life in a visible way.

“The formality of it coming from an agency at this level is fantastic,” she said. “This month is about sharing our story with our fellow Americans.”