Pieces of the puzzle falling into place

The coming worldwide fascism will make everything that preceded pale in comparison & be from the left not the right & there is coming world governance, collusion, even though they might let you keep your flags and certain holidays…

All the bits, pieces, advancements of technology said to make the world better, safer, more secure and prosperous are for the exact opposite intent

Turning from God — vainly imagining themselves gods, attempting to create their “perfect world” when all they are doing is preparing the table for the end…

this but one part, one cog, one piece of the many pieces puzzle almost completed before us… 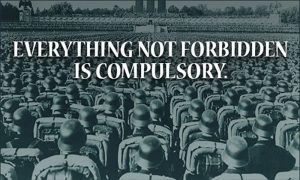 “I think next year you’ll be able to see police with these unusual gadgets on the streets of major cities,” Chemezov was quoted as saying by the state-run TASS news agency Thursday.

The augmented-reality (AR) glasses will use technology that helped catch more than 180 criminals during the football World Cup in Russia last year, Sergei Chemezov said at a tech conference in central Russia

Their developer already deploys facial recognition technology to identify criminal suspects across a network of 160,000 surveillance cameras in Moscow.

FindFace technology developed by Rostec-owned firm NTechLab has made headlines in recent years for outing anti-corruption demonstrators in Russia and finding people’s social media accounts based on their photographs.