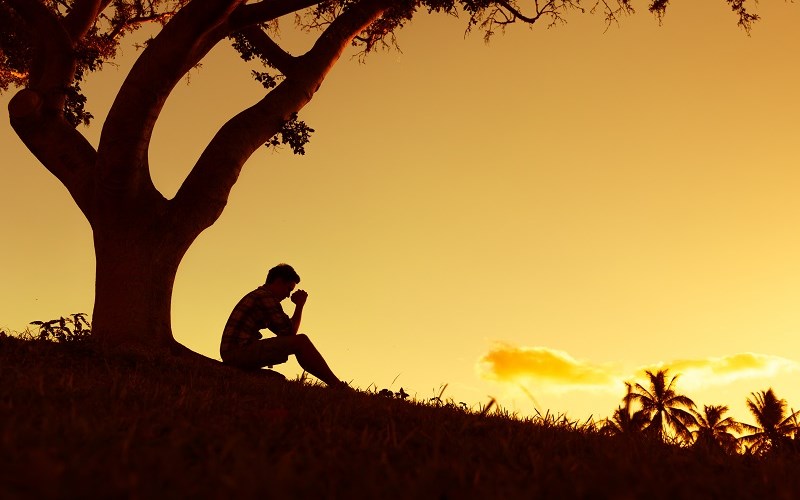 True repentance occurs when true regeneration and being transformed by the power of the Holy Spirit occurs within an individual’s heart and mind. Because we are not merely regretful, remorseful, or sorry — we become, or ought to become so devastated by the degree and level of our sin, our attitude, and treatment towards God, towards the Lord Jesus Christ, towards the Holy Spirit and the Holy Bible it brings us to a point of sorrow, surely, but also a knowledge of and constant desire within to never REPEAT, never RETURN to what we did, how we thought, how we lived, the attitudes, practices, and behaviors we held that brought more sorrow to God, to Christ, to the Holy Spirit than any sorrow we could feel. For Their love towards us is far greater than our love towards Them can be, but through TRUE repentance we come as close as possible in this flesh to knowing what godly love, godly forgiveness, godly mercy is and we then desire within, having a burning heart for the Lord, to live continually, constantly to please the Lord and be acceptable unto Him. Truly repentant of our past and putting that away, aside, and not returning to the past.

Much more than regret or remorse or any worldly understanding.

True repentance comes with true conversion, true regeneration, truly being born anew into a new creature. To come to a new understanding, a new life is only made possible in discerning and living by the power of and the working in each person by the Holy Spirit.

Just saying something does not make it so.

A worldly understanding, a world point of view, worldly definitions are chaff, rubble, waste in the pursuit of God and in being refined, renewed of mind and spirit, and made one of His.

There is sorrow for pain caused and there is fearfulness of the penalty.

Then Judas, which had betrayed him, when he saw that he was condemned, repented himself, and brought again the thirty pieces of silver to the chief priests and elders, saying, “I have sinned in that I have betrayed the innocent blood.” And they said, “What [is that] to us? See thou” [to that]. And he cast down the pieces of silver in the temple, and departed, and went and hanged himself. (Matthew 27:3-5 KJV)

As I preached about Judas this past Sunday, I reminded the congregation, and myself, that repentance and remorse are not the same thing. Just because someone is remorseful, doesn’t mean they are repentant. Judas is a perfect example.

Think of politicians or high-profile people who get caught up in and exposed in some scandal. Generally, what follows is a press conference or press release or carefully crafted statement expressing their sorrow over their actions and the harm they have caused. They will often put forth a new façade to match their newfound remorse. Behind the veil, however, those people rarely change. Sure, they are sorry – sorry they got caught, not sorry over what they’ve done.

This is how Judas is depicted in Scripture. Judas betrayed Christ. Why he did so isn’t explicit in Scripture, and is a point of contention among many.

I believe Judas betrayed Christ because Jesus was not turning out to be the Messiah he wanted. Judas, like most people in Israel at the time, was hoping for a Messiah to overthrow Roman occupation and deliver them from Roman rule and oppression.

Had that been Christ’s mission, any person who had followed Him and been devoted to Him would have taken a place of leadership and authority with Him. As one of His disciples, Judas certainly would have been included. It’s likely Judas hoped for a position among the ruling elite. This view fits with Judas’s character. John tells us in John 12:6 Judas didn’t care for the poor, but that “he was a thief, and had the bag, and bare what was put therein.” Judas was motivated by money and power.

Christ had already made it clear that He wasn’t going to establish an earthly kingdom [at this time]. When Judas finally realized that Christ really meant He was going to die, and there would be no revolution, he had no more use for Jesus, thus the betrayal.

To be fair, I don’t believe Judas thought Christ would ever stand trial and be proven guilty and sentenced to death. Most scholars agree Judas believed Christ would escape arrest because he had seen Christ do so a number of times before.

Matthew Henry puts it this way:

“Judas, it is probable, expected that either Christ would have made his escape out of their hands, or would so have pleaded his own cause at their bar as to have come off, and then Christ would have had the honour, the Jews the shame, and he the money, and no harm done.”

Judas saw it as a win-win. Jesus would escape. Jesus and the disciples would go on about their business. The Jews would be embarrassed, and he would be thirty pieces of silver richer.

Once Judas recognized the consequences of his actions, he was sorrowful. “Then Judas…when he saw that He was condemned, repented himself…” (Matthew 27:3)

The King James renders the Greek word metamelomai, repented. A better rendering of the word, which many translations use, would be regret or remorse. The Greek word metanoeo, most commonly used in the New Testament, describes true repentance – that is, a change of mind over sin that results in a change of action.

The point is, Judas was sorry, but not repentant. He felt guilty that Jesus was convicted and sentenced to death, and he even admitted “…I have sinned, I have betrayed innocent blood…” (Matthew 24:4). But it was sorrow over the result of the sin, not the sin itself.

Thomas Watson, a Puritan preacher from the 17th century said, “Many think they repent, when it is not the offense, but the penalty that troubles them.”

A guilty conscience and conviction over sin are good attributes, but if that is all that’s present, true repentance is lacking.

I’m reminded of an illustration I once read describing true repentance. Imagine traveling on the interstate and you realize you are traveling in the wrong direction. You have a choice. Continue on that path, or admit your error, exit on the off-ramp, turn around, and take the on-ramp and go the other direction. That’s what true repentance looks like – turning from sin to righteousness.

Remorse is only part of that equation. Remorse is like slowing down, or even taking the off-ramp, but never really turning around and going the other way.

J.I. Packer said, “Repentance, as we know, is basically not moaning and remorse, but turning and change.”

Paul described the difference between repentance and remorse in 2 Corinthians 7:10:

For godly sorrow worketh repentance to salvation not to be repented of: but the sorrow of the world worketh death.

Again, Judas wasn’t broken over his sin, but the result of his sin. He proved that by the way he tried to resolve the issue. He went to the chief priests and elders to confess his evil and return the silver. He tried to clean up his own mess. He hoped the religious leaders would listen and let Jesus go. But it was too late.

Instead of going to the chief priest, he should have gone to the High Priest, Jesus Christ. Still determined to take matters into his own hands and make restitution, Judas “went and hanged himself” (Matthew 27:5).

Judas had sorrow, but it was a worldly sorrow as Paul described in 2 Corinthians 7:10, a sorrow that brings spiritual death.

To understand the difference between repentance and remorse, one need not look further than the two examples provided by Peter and Judas. Matthew records their stories, not coincidentally, side by side in Matthew 26 and 27.

Both of their sins, Peter’s denials of Christ and Judas’s betrayal, were egregious and equally condemnable before the Lord. Their contrasting responses to their wickedness offer a glaring distinction.

Jesus said of Judas, “…woe unto the man by whom the Son of man is betrayed! It had been good for that man if he had not been born” (Matthew 26:24.) Judas is in hell, not because he betrayed Christ, but because he never repented and sought forgiveness.

Peter, on the other hand, stood before Christ after His resurrection, confessed his love for Jesus, and received the command from Christ to feed His sheep. Peter went on to boldly preach on the day of Pentecost and saw thousands of new believers added to the church.

Thomas Watson, in his book, The Doctrine of Repentance, wrote, “A wicked man may be troubled for scandalous sins; a real convert laments heart-sins.”

Are you repentant or merely remorseful?

If you really want to know, answer this question: “Am I sorry that I must face the consequences for my actions, or am I broken over sin because I’ve transgressed against God?”

“It is not the absence of sin but the grieving over it which distinguishes the child of God from empty professors.”