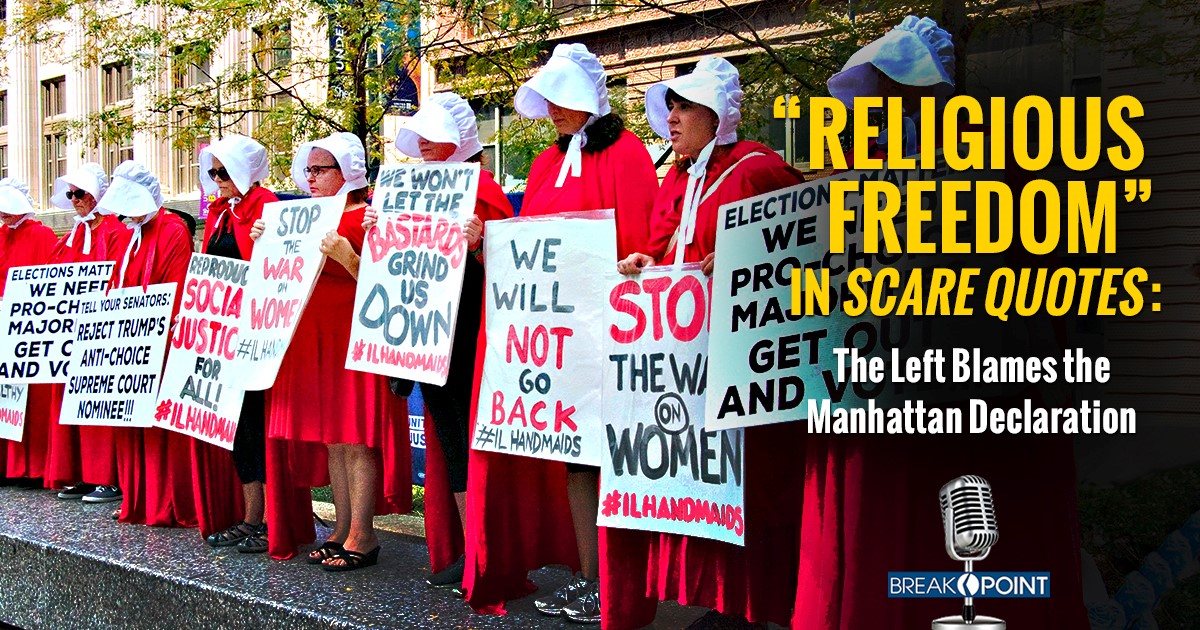 The Left Blames the Manhattan Declaration

In early May, Health and Human Services (HHS) announced new rules to ensure that “healthcare professionals will not feel compelled to leave the practice of medicine because they decline to participate in actions that violate their conscience such as abortion, sterilization, or assisted suicide.”

Not surprisingly, the new rule was immediately challenged in federal court by groups alleging, among other things, that the new rule “advances specific religious beliefs in violation of the First Amendment; violates patients’ rights to privacy, liberty and equal dignity as guaranteed by the Fifth Amendment; and chills patients’ speech and expression in violation of the First Amendment, all to the detriment of patients’ health and well-being.”

Other left-wing websites such as Salon also joined the chorus of outrage. “Progressives fight back against Religious Right’s grotesque ‘religious freedom’ power play,” one of the headlines proclaimed.

In addition to the strange use of the word “grotesque,” the headline put religious freedom in scare quotes, and the article went on to claim that the new rule has “nothing to do with the genuine freedom to adhere to one’s religious beliefs.”

No, instead, religious freedom is a “power play” to invent what they call “an imaginary right to discriminate.” I think a better use of the word “imaginary” would be repeated references to the Handmaid’s Tale we’ve all been forced to endure over the last two years.

Salon’s rhetoric is nothing new. But I was surprised by Salon’s claim that our nation’s new “theocratic direction,” as they put it, has its origin in, of all things, the Manhattan Declaration!

Theocratic? To paraphrase “The Princess Bride,” people keep using that word, but it does not mean what they think it means. A theocracy is “a form of government in which God or a deity is recognized as the supreme civil ruler,” and “His laws [are] interpreted by the ecclesiastical authorities.”

Then, and even more so now, Christians were in no position to “impose” their views on anyone. In fact, we’ve barely been able to impose them on ourselves, which was why the Manhattan Declaration was created in the first place.

In the ten years since the Declaration was issued, progressives have labeled any assertion of conscience, any refusal to conform one’s conduct to the prevailing cultural orthodoxy as an attempt at “theocracy.” Cue those protesters dressed as handmaids.

The issues raised by the Manhattan Declaration—life, marriage, and religious liberty—are more important now than ever. Even more important, however, is that we are able to articulate and explain why these issues are so important and non-negotiable for Christians in the first place—and why the authors and a half a million signers of the Manhattan Declaration solemnly declared that “We will fully and ungrudgingly render to Caesar what belongs to Caesar,” but under “no circumstances” can we “render to Caesar what belongs to God.”

That’s why in this 10th anniversary year of the Manhattan Declaration, I was pleased to work with the brilliant Dr. David Dockery on a new book, “Life, Marriage, and Religious Liberty: What Belongs to God, What Belongs to Caesar.” We assembled a stunning group of contributors, including both Dr. Georges, Joni Eareckson Tada, Randy Alcorn, Ryan Anderson, Frederica Mathewes-Green, Michael Farris, Kristen Waggoner, Mary Eberstadt and more.

The book is available at BreakPoint.org with your next donation to BreakPoint and the Colson Center. I hope you’ll get a copy for yourself, or for your small group.

Christians do not want a theocracy. We simply want the freedom to live out our faith in the way that has proven to be good for the world. But make no mistake, what opponents of religious liberty want is nothing less than secular tyranny.