Pakistan: Christian family beaten for keeping 13-year-old daughter from being forcibly converted to Islam and raped 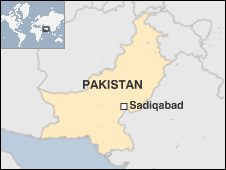 Pakistan: Christian family beaten for keeping 13-year-old daughter from being forcibly converted to Islam and raped

The daily persecution of minorities in Pakistan continues. In this case, a young girl called Noor, a Pakistani Christian was nearly abducted from her home by Muslim men. Her family was severely beaten when trying to protect her.

The persecution occurred in the city of Sadigabad. The father, Aslam Masih, states that 12 men came and they were planning to rape and forcefully convert Noor to Islam. The leader of the Muslim gang was called Mohammed Irfan, and the mother of the victim, Noreen Bibi, stated that Irfan “disturbed my daughter in the streets, but we always ignored. Finally, Irfan forcibly entered my house and intended to kidnap my daughter.” The entire family was severely beaten and had multiple injuries. Bibi also stated that the Muslims threatened to burn down their home if the family pursued legal action.

Religious minorities that have been persecuted by Muslims in Pakistan rarely receive any justice. They are frequently given death threats by the Muslims to make them feel degraded and intimidated. Just last year, a young girl called Huma Younus was forcibly abducted by Muslims and converted to Islam. She was raped. Yet the legal system favoured the Muslim rapist.

Pakistan is a clear example of what happens when Islam reigns supreme. Muslims take infidels, girls, as sex slaves, which is sanctioned numerous times in the Koran. See verses 4:24, 4:3, 23:6, 33:50. Muslims can have sex with young girls; see Surah 65:4. The Koran consistently emphasises that Muslims can take what their “right hand possesses”; this refers to raping non-Muslim women and girls. Taking them as sex slaves is not even considered rape in Islam, but something that is rewarded and seen as “sunnah.”

Muslims are the majority in Pakistan and have full control of the political and legal systems, as well as of the media. They can take non-Muslim girls as sex slaves and get away with it. They rarely face any prosecution, and if they are prosecuted, they intimidate the families of the victim. Prime Minister Imran Khan has been slow to address the issue of the persecution of religious minorities in Pakistan. His main priority is to deal with “Islamophobia.” Nobel Peace Prize winner and recent Oxford graduate Malala Yousafzai have also failed to address the persecution of minorities in Pakistan. In fact, she blocks people on Twitter who raise this concern. Yet she is supposed to be a human rights activist. The least Western countries can do is report on these violations of human rights and boycott countries such as Pakistan. 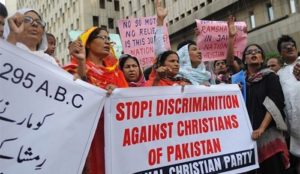 A young Pakistani Christian girl was nearly abducted from her home earlier this month when a radical group of Muslim men attacked her entire family, according to a U.S.-based Christian persecution watchdog.

International Christian Concern reported the near abduction of the 13-year-old daughter of Aslam Masih and Noreen Bibi in the Christian-majority neighborhood of Sadigabad in Pakistan’s Punjab province on July 12.

Masih and his family were violently attacked by a mob of 12 men who broke into their home and tried to kidnap his daughter, Noor, who they planned to rape and forcefully convert to Islam.

According to ICC, a man named Muhammad Irfan led the group of armed men. Bibi told the organization that Ifran would often express sexual interest in her young daughter.

“He [Irfan] often teased and disturbed my daughter in the streets, but we always ignored,” Bibi recalled. “Finally, Irfan forcibly entered into my house and intended to kidnap my daughter. However, we resisted. In response, he attacked and beat my entire family who got multiple injuries.”

According to Bibi, her husband was injured in the attack and hasn’t received medical care to treat his wounds.

“[P]olice have not registered the case against Irfan and medical staff have not provided medical aid to the injured,” Bibi was quoted as saying.

Irfan’s threats have also continued despite the family’s resistance. Bibi also said that Irfan’s supporters have threatened to burn down their home and cause further harm if the family pursues legal action.