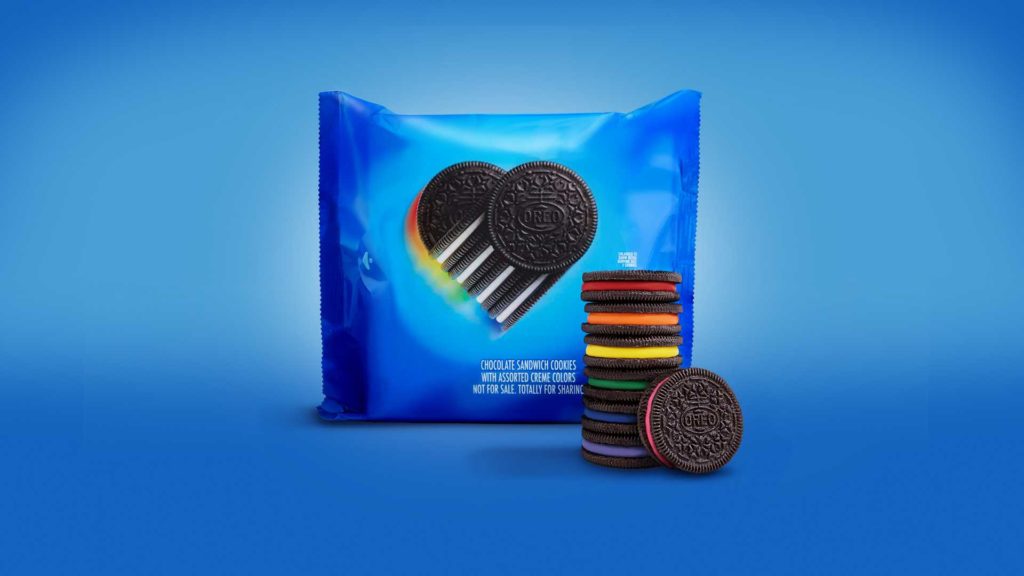 Nabisco’s Oreo brand has announced that it is giving away 10,000 packages of its limited edition rainbow-themed cookies, which it created out of a partnership with the group Parents, Families and Friends of Lesbians and Homosexuals (PFLAG). While some have supported the effort, others have denounced Oreo for promoting sin and not just making cookies.

The year-long collaboration seeks to promote acceptance of homosexuality in families and society. Its “Proud Parent” campaign is meant to push for family affirmation of those who identify as homosexual.

It has since released a plethora of posts advertising its efforts, tweeting comments such as, “Pride doesn’t end in June and neither does allyship,” “We’re loud and proud about our love for love, and you should be too!” and “Being an ally means speaking up and showing up all year long.”

The popular brand additionally released a short video depicting a young woman named Jen who brings another girl home to meet her family. While her mother is accepting of the relationship, her father stands aloof — but eventually caves and paints his white picket fence rainbow colors in support of sexual variance.

The women are depicted kissing as well as lying together, and in one scene, snuggling on the couch in the presence of Jen’s father.

“A loving world starts with a loving home,” Oreo wrote about the production.

While some expressed support for the effort, others wished the company would just sell cookies and leave their agendas out of it.

“I loved Oreos for years, but I can do without the homosexual propaganda being shoved in my face. What happened to the family friendly O.R.E.O commercials with happy children dunking their cookies?” one commenter asked.

“[C]an I just have a double stuffed without the other stuff? It’s in the culture, it’s on the TV, it’s all over sports, and when I would just like to sit back with a cold glass of milk with some cookies, it’s on Twitter. Bummer,” another remarked.

“A loving home starts with love, faith and obedience towards God and teaching children the right way to live and the relationship God designed, which is one biological man with one biological woman,” a third wrote.

“Teaching the acceptance of any sin against God is eternally harming them,” another noted.

While a common argument among those who struggle with feelings toward the same sex is that they were “born this way,” the Bible teaches that all are born with the Adamic sin nature (Romans 5:19), having various inherent feelings and inclinations that are contrary to the law of God and being utterly incapable of changing by themselves (Job 14:4).

All men, therefore, face the same predicament, being natural lawbreakers and guilty in the sight of God (Romans 3:19), evoking His wrath.

“[W]e all had our conversation in times past in the lusts of our flesh, fulfilling the desires of the flesh and of the mind, and were by nature the children of wrath, even as others,” Ephesians 2:3 outlines.

“All we like sheep have gone astray. We have turned every one to his own way,” Isaiah 53:6 reads, “and the Lord hath laid on him the iniquity of us all.”

It is why Jesus came: to do what men could not do for themselves, to “save His people from their sins” (Matthew 1:21).

Scripture outlines that Jesus came to be the propitiation for men’s sins (1 John 2:2; 1 John 4:10), a doctrine in Christianity known as substitutionary atonement, and to save men from the wrath of God for their violations against His law (Romans 4:25, Romans 5:9, Romans 5:16), a doctrine known as justification.

In light of Christ laying down his life for His enemies (Romans 5:10), God calls all men to repent and believe the gospel (Mark 1:15).

Acts 2:38-40 exhorts, “Repent, and be baptized every one of you in the name of Jesus Christ for the remission of sins, and ye shall receive the gift of the Holy Ghost. For the promise is unto you and to your children, and to all that are afar off, even as many as the Lord our God shall call.”

The Bible also teaches about regeneration, as in addition to sparing guilty men from eternal punishment, Christ sent his Holy Spirit to make those who would repent and believe new creatures in the here and now, with new desires and an ability to do what is pleasing in the sight of God by His indwelling and empowerment (Ezekiel 11:19, 2 Corinthians 5:17, Titus 3:5).

The late Anglican preacher J.C. Ryle once explained, “The Lord Jesus has undertaken everything that His people’s souls require — not only to deliver them from the guilt of their sins by His atoning death but from the dominion of their sins by placing in their hearts the Holy Spirit; not only to justify them but also to sanctify them.”