No Time For Cowardice – Courage Can Be Costly 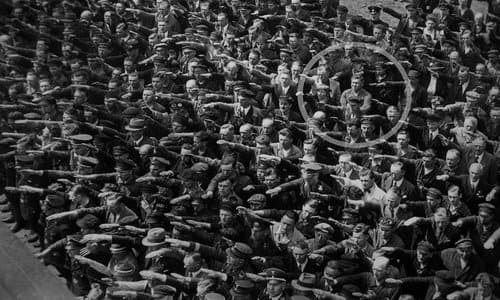 The man was August Landmesser, and he refused to do the ‘Sieg Heil’ salute during a Nazi rally at the Blohm & Voss shipyard in Hamburg on June 13, 1936.

No Time For Cowardice – Courage Can Be Costly

According to the book of Revelation, “the cowardly,” along with a host of other sinners, like murderers and the sexually immoral, will one day be cast into the lake of fire (see Revelation 21:8). But what is so bad about being cowardly? Why is it such a serious sin?

The Greek word used for “cowardly” also means “fearful,” and it is found two other times in the New Testament.

As explained by the Greek scholar Celsas Spicq, “Jesus reproaches the apostles for this psychological fear when they are terrified by the storm (Matt 8:26; Mark 4:40) because it involves a moral deficiency: they no longer have faith, or they have but little faith in the presence of the Savior, who has to reassure them.” In contrast, “when one relies on God, there is nothing to fear.” (From his Theological Lexicon of the New Testament.)

So, there is something morally deficient in being fearful when Jesus Himself is with you. And in the situation described in the Gospels, when the disciples were terrified by the storm at sea, they should have known better. Jesus was in the boat with them, even though He was asleep.

That’s why He rebuked them for their unbelief and fear.

But is this a damnable sin? Does it deserve to be placed side by side with murder? Surely the Lord understands our weaknesses and knows that we sometimes struggle with fear.

Spicq explains that there was something more involved in Revelation 21. He writes, “When Rev 21:8 places the fainthearted and the unbelieving in the lake of fire, it has in view Christians during times of persecution who, out of a fear of suffering, renounce their faith.”

So, that is what is meant by cowardice.

It speaks of people who chose to deny Jesus in order to save their lives. It speaks of the cowardice that opts for an easy way out rather than the faithful obedience that takes a stand regardless of the cost.

Spicq continues: “It is a commonplace that human courage and cowardice are revealed in the face of death. . . . Cowardice can then be defined as ‘a more serious disease than those which afflict the body, because it destroys the faculties of the soul’ (Philo, Virtues 26) and seen as a major vice, characteristic of base souls.”

Does this make more sense now?

That kind of cowardice is a serious ethical violation, something “characteristic of base souls.”

It speaks of those who put survival before principle and who substitute convenience for courage. When the rubber meets the road, they cave.

They are not dependable. They cannot be trusted. They will let you down when the going gets rough. They are lacking in character.

What highlights their moral weakness is the sacrificial obedience of other Christians. They were willing to lose family, reputation, jobs, opportunity, even life, and limb rather than sacrifice to Caesar. Against the backdrop of their obedience, the self-serving decisions of the cowardly stand out all the more boldly.

The reverse image can be seen in a famous photograph from Nazi Germany, where one man’s courage stands in contrast with the fawning obedience of the crowd.


The man was August Landmesser, and “he refused to do the ‘Sieg Heil’ salute during a Nazi rally at the Blohm & Voss shipyard in Hamburg on June 13, 1936.”


His marriage to a Jewish woman was nullified by the Nuremberg Laws, which led to his disdain for Hitler. And so, when everyone else in the crowd signaled their loyalty to Hitler with their right hands extended, Landmesser folded his arms in scorn.

After attempting to flee to Denmark some months later, Landmesser, his wife Irma, and their first child were apprehended.  (He was charged with “dishonoring the race” or “racial infamy” under the Nuremberg Laws.)

Eventually, when he refused to break off the relationship, he was sentenced to more than two years in a concentration camp. Sometime after his release, he was consigned to a virtual suicide mission fighting against the allies, where he died.

His wife, Irma, was put to death in a concentration camp, although their two children survived.

The Cost of Cowardice

Courage can be costly. Very costly.

But the cost of cowardice is far greater.

It not only diminishes our souls. It damns our souls. And it destroys our legacy for the coming generations. (When we look at the picture with Landmesser, who do we admire and who do we scorn?)

Proverbs says, “If you falter in a time of trouble, how small is your strength!” (Proverbs 24:10) It is times of trouble that will test us.

As C. H. Mackintosh said, “A coward heart will not do for the day of battle; a doubting spirit will not stand in conflict.”

The days ahead will be days that challenge our souls and test our faith. What, then, will it be?