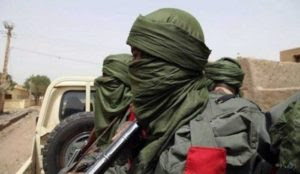 This is not “extremism.” Abduction of Infidels is sanctioned in Islamic law and subject to particular rules: “As for the captives, the amir [ruler] has the choice of taking the most beneficial action of four possibilities: the first to put them to death by cutting their necks; the second, to enslave them and apply the laws of slavery regarding their sale and manumission; the third, to ransom them in exchange for goods or prisoners; and fourth, to show favor to them and pardon them. Allah, may he be exalted, says, ‘When you encounter those [infidels] who deny [the Truth=Islam] then strike [their] necks’ (Qur’an sura 47, verse 4)” — Al-Mawardi, al-Ahkam as-Sultaniyyah (The Laws of Islamic Governance).

Abducting Infidels and then ransoming them is a major source of income for some jihad groups.

Just so that there is no confusion, Niger State is in Nigeria, not Niger.

Some gunmen suspected to be terrorists have stormed Gurmana community in the Shiroro Local Government Area of Niger State, SaharaReporters has learnt.

The suspected terrorists were said to have invaded the community in broad daylight on Friday, killing people and burning houses and properties.

As at the time of filing this report, one person had been killed and six persons had been abducted, SaharaReporters also learnt.

A source in the community also told SaharaReporters that “yams worth millions of naira were set ablaze”.

“It is so sad that people are getting killed every day and the government does not appear to be concerned or doing anything about it. It is a shame that we cannot sleep with our eyes closed,” the source said.