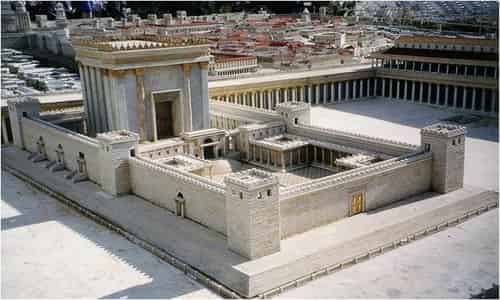 Yoni Tzadok is running an unusual school in the mountains of Judea to prepare for the Third Temple. According to Tzadok, the first requirement for entering the Temple will be speaking the “Holy Tongue” which is not Hebrew but, rather, a return to how men spoke before the divine linguistic barrier imposed at the Tower of Babel.

As the first in a series of interviews about his preparations for the Third Temple, Israel365 video Journalist Joshua Wander spoke with Yoni Tzadok, a resident of Mitzpe Jericho overlooking the region where the Jews first returned to the land of the Patriarchs. Tzadok is fervently engaged in several projects focused on these preparations and though his approach to some of the aspects is decidedly non-mainstream, raising the eyebrows of some Torah scholars, his efforts are undoubtedly inspiring debate on subjects that have lain dormant since the Temple was destroyed.

In his conversation with Wander, Tzadok explained that he referred to the school as Bet HaMoked, the section of the Temple in which the Kohanim would stay for their annual week of service.

“My school is open for any person,” Tzadok explained. “Not just kohanim and Leviim, and not just for Jews. Muslim or Christian, this is the next stage of the world so everybody should prepare.”

“I am giving the keys for anyone who wants to open the doors to this world and the next stage,” Tzadok explained. “Just open you remind and an entirely new world is right there.”

MADE FROM BONES OF KOSHER ANIMALS

At the entrance to his school, what Tzadok refers to as the Bet HaLeviim (the house of the Levites), Tzadok has a display of stones which, according to his research, are suitable for use in constructing the altar. Another display is focused on teaching about the unique musical instruments that were an essential part of the Temple service.

“Nothing about these, the instruments and the stones, can come from iron,” Tzadok explained, citing the section of the Mishna (oral law)  titled Kelim (tools/instruments). “Some are made from bones of kosher animals and we are teaching how to play them.”

Another important aspect of the Temple service was a complete and intensive knowledge of ritual purity and impurity.

“It is important to know who can enter the Bet HaMikdash (Temple) and who cannot,” Tzadok explained. “For example, if a man arrives at the Temple, before he enters, they must ask him how he arrived. If he said that he came by bus, he cannot enter because the bus is, by default, ritually impure. So there have to be guards at the entrance to the Temple to ensure the purity of the sacrifices.”

THERE WILL BE NO ENGLISH AND NO OTHER LANGUAGES

“Everyone who serves in the Temple should know how to sing and how to speak in Lashon HaKodesh (the holy tongue),” Tzadok explained. “In the world of the Temple, there will be no English and no other languages. Because of Man’s sins in the generation of the Tower of Babel, all the men were dispersed and their languages confused. The Third Temple will fix us, taking us backward and forward at the same time. The world will return to the days of old, before the sins, when everyone spoke the Lashon HaKodesh.”

Tzadok referred to a verse in Lamentations as his source.

Take us back, Hashem, to Yourself, And let us come back; Renew our days as of old! Lamentations 5:21

“It is Hebrew, but more importantly, we will be using it as it should be used,” He explained.

IVRIT’ COMES FROM THE WORD ‘TO CROSS OVER’

Tzadok understands that modern Hebrew as it is used in Israel today is not Lashon HaKodesh.

“‘Ivrit’ comes from the word ‘to cross over’,” he explained. “It comes from ‘over the river.’ It is a Semitic language but it is not Lashon HaKodesh which disappeared after Babylon came into power.”

As an example, Tzadok explained that the name ‘Moses’, or Moshe in Hebrew, is considered to be an archetypal Hebrew name however the word is not, in fact, of Hebrew origin.

“When Batya, the daughter of Pharoah, pulled Moses from the water, she called him ‘Moses’ because of that act,” Tzadok said. “However she spoke Egyptian, not Hebrew. The Torah translated what she said but it is not his name in Lashon HaKodesh.”

Tzadok explained that communication in the Third Temple, in fact, all over the world, will return to the pre-Babel/post-Eden condition. This post-Messiah transition was referred to by the Prophet Zephania.

For then I will make the peoples pure of speech, So that they all invoke Hashem by name And serve Him with one accord. Zephaniah 3:9