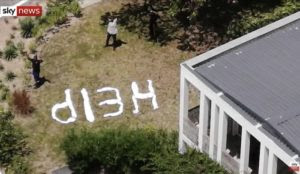 The hopelessly clueless Daily Mail, by far the worst paper in the Western world (here’s why), identifies the victims as “white expats,” but in reality they weren’t murdered for their race. Their race may have helped identify them as foreigners, and thus likely non-Muslims, but they were beheaded for being non-Muslims. The Daily Mail, although its coverage of jihad violence is better than that of most “news outlets,” would never dream of telling you that. Instead, it muddies the waters and confuses its readers by making this a racial issue.

The bodies of 12 beheaded expats have been found after an ISIS massacre in a Mozambique town where a British worker was killed in a desperate escape bid.

The nationalities of the 12 people found ‘tied up and beheaded’ in the northern town of Palma cannot yet be confirmed, a local police commander said.

They are all believed to be foreigners because they are white, Commander Pedro da Silva said.

Standing near to an area of disturbed earth where he said he buried the bodies himself, Commander Silva told state broadcaster TVM: ‘They were tied up and beheaded here.’

The latest attack comes less than a month after dozens of innocent people were killed when Islamist insurgents launched a raid in Palma on March 24, including 50-year-old Briton Philip Mawer.

A body matching Mr Mawer’s description was pulled from the wreckage of a car destroyed in the attack.

It is believed he was fleeing from the siege by ISIS-linked insurgents at the Amarula Hotel….

Mozambique is a majority Christian country, with Muslims comprising around a fifth of its population.

A religious movement, Ansar al-Sunna, first appeared in 2015 in the north of the country, formed by followers of radical Kenyan cleric Aboud Rogo Mohammed who has been linked to the 1998 U.S. embassy bombings.

The group attracted disaffected young men who resented a lack of opportunities in an area of rich natural resources.

But in 2017, the group starting launching attacks and became known locally as al-Shabab, although they do not have any known connection to Somalia’s jihadist rebels of that name.

Militants started posting photos on the encrypted messaging service Telegram posing in front of the ISIS flag and praising its then leader Abu Bakr al-Baghdadi.

Islamic State then confirmed that jihadis in Mozambique had joined its Central Africa Province division (ISCAP), along with militants in the Democratic Republic of Congo.

ISIS have since claimed responsibility for many of the attacks carried out in Mozambique, including brutal beheadings and massacres, often posting photos of the victims online.

In an official ISIS news bulletin in June last year, leaders taunted the West and African nations for failing to stop the insurgency in Mozambique, and said its interest there is financial with the country’s huge coal and gas reserves.

The militants still refer to themselves as al-Shabab but they are now strongly considered to be an arm of ISIS, which was confirmed by U.S. officials in December.