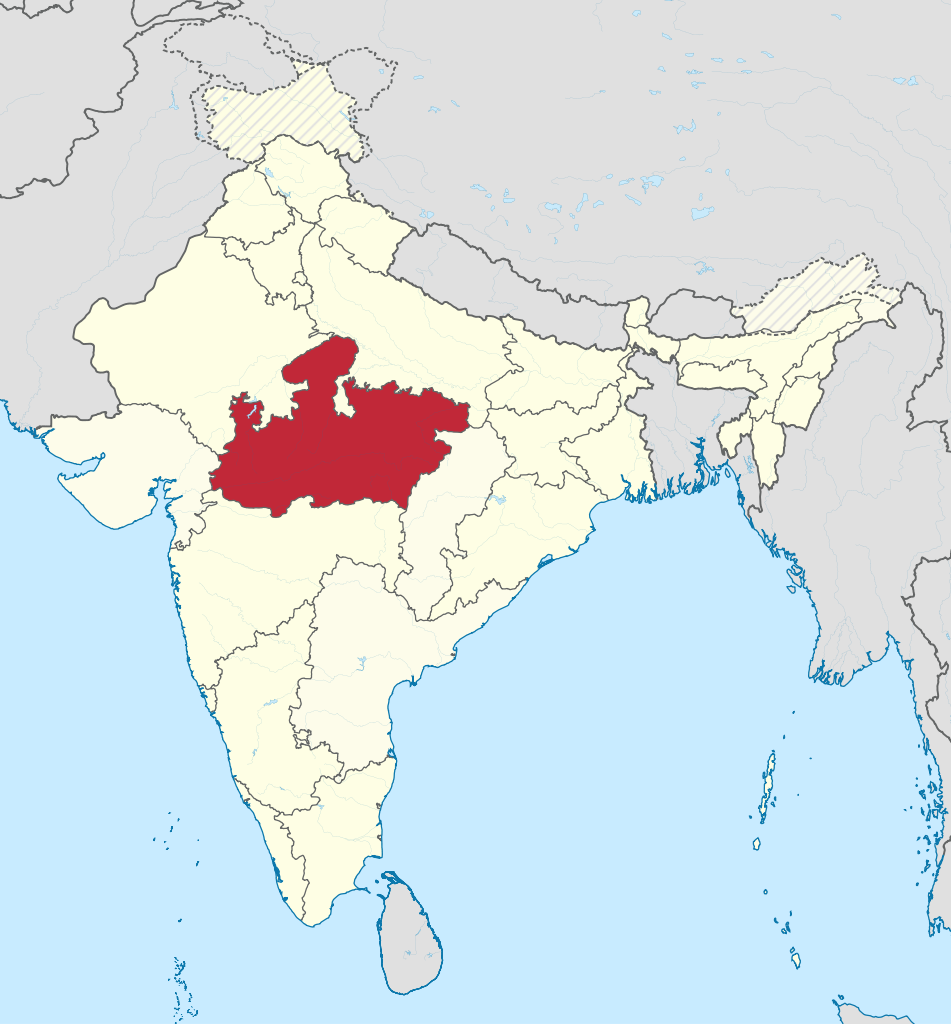 The highlighted area on the map is the Madhya Pradesh State in lost, pagan India much in need of the gospel of the Lord Jesus Christ and the truth of the Holy Scriptures. Persecution of Christians in India is rampant, daily, and horrendous. Pray for the saints in India. Pray the truth of the gospel spreads throughout pagan India as the power of the Spirit of God is mightier than any worldly government (see Isaiah 40:9-31 if you do not know this, or do not believe this).

The illustration caption provided by the administrator of A Crooked Path and did not appear in the original article found below.

Another state in India has passed a law banning religious conversions. Madhya Pradesh has replaced existing legislation with a tough new law intended to prevent Hindus changing their religion.

Observers warn this is the harshest anti-conversion law yet to be passed in India. And there is concern it could lead towards a ban on Christian evangelism in the entire country.

The latest Persecution Trends survey by UK-based Release International warns of rising persecution in India in 2021. Release calls for the repeal of all India’s anti-conversion laws.

At least nine Indian states have now passed anti-conversion laws, and some like Madhya Pradesh are tightening up earlier legislation.

Under the new restrictions there suspects can be arrested without warrant and held without bail and the onus is on them to prove their innocence.

The anti-conversion law in Madhya Pradesh was put into effect by the state governor on January 9. It follows Uttar Pradesh, which imposed a similar law in November.

The new rules in Madhya Pradesh mean anyone wanting to change their faith must obtain official permission 60 days in advance. The penalty is up to ten years in jail and a fine of 50,000 rupees.

The law is ostensibly intended to prevent conversion by force. But in practice, such laws treat Christian relief aid as bribery, and warnings of divine judgment as coercion.

The law states: ‘No person shall convert or attempt to convert, either directly or otherwise, any other person by use of misrepresentation, allurement, use of threat of force, undue influence, coercion or marriage or by any other fraudulent means.’

‘On the face of it, that may seem reasonable, but these laws are catch-alls which simply fuel intolerance and extremism,’ says Paul Robinson of Release International, which supports persecuted Christians around the world.

‘Our partners are recording a rise in attacks against Christians in India, which has become a country of concern. Release International urges India to repeal these anti-conversion laws.’

In Uttar Pradesh, one of the most recent states to pass such legislation, a South Korean Christian and three Indian nationals have been jailed after distributing food aid to people impacted by the Covid lockdown.

The accused deny offering money or asking anyone to change their religion.

‘The move to prevent conversions in India is partly a reaction against growing numbers of the Dalit underclass responding to Christianity,’ says Paul Robinson.

‘These are the so-called untouchables. Many see them as fated to carry out menial tasks, such as cleaning lavatories or sweeping the streets. Unsurprisingly, many Dalits are responding to the Christian message of love and acceptance.’

The anti-conversion movement marks the rise of Hindu nationalism in India. Radical Hindus promote the notion of Hindutva, that to be Indian is to be a Hindu – and nothing else will be tolerated.

That culture of intolerance has given rise to growing attacks against Christians and Muslims in the country.

According to India’s Alliance Defending Freedom (ADF), Christians suffered more religiously motivated violence during the first ten months of 2020 than in the same period in 2019. Many of these attacks were by vigilante mobs.

In September 2020, Hindu extremists incited crowds of up to 3,000 to attack Christians in three villages in Chhattisgarh – another state to have passed an anti-conversion law.

Intolerance towards Christianity has been growing since the BJP (Bharatiya Janata Party) came to power in 2014. According to Release partners, attacks against Christians rose significantly following the subsequent landslide victory for BJP Prime Minister Narendra Modi in 2019.

Back in 2013 the BJP stated its aim to impose a national law banning conversions. The Supreme Court is currently reviewing the constitutional validity of various state anti-conversion laws.

In some areas, suspects can be arrested without warrant and held without bail.

In Madhya Pradesh and Himachal Pradesh the burden of proof falls on the individual, who must demonstrate they were not forced to change their religion. And in Uttar Pradesh it falls to the evangelist to prove that any conversions were not by force. All three states are under BJP rule.

‘It seems under these anti-conversion laws you are guilty until you can prove your innocence,’ says Paul Robinson of Release International.

Through its international network of missions, Release International is active in some 25 countries around the world, supporting pastors, Christian prisoners and their families; supplying Christian literature and Bibles, and working for justice.