Kindergarten History Lessons in Virginia to Focus on Slavery 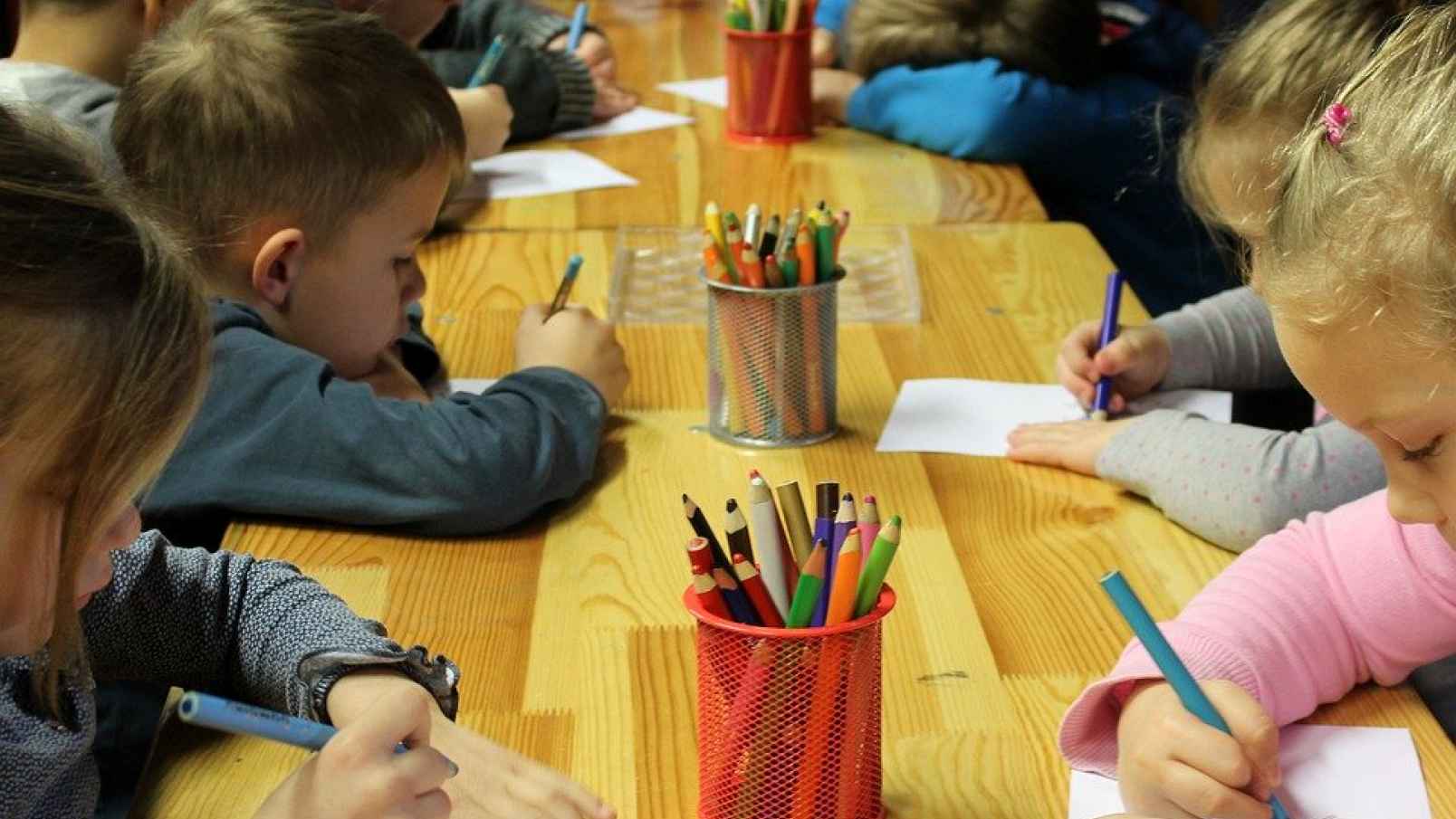 You have certainly heard it said, “It takes a village to raise a child.” That sounds comforting, helpful, considerate, communal, and cooperative on the surface. It sounds benign and as something good but the whole premise behind that appearing innoxious statement has at its heart, its intent, to turn over the foundational teaching of your children to the state. To public or various private educators.

As the old Greyhound bus commercial used to say, for those old enough to remember, “Leave the driving to us.”

Taking control of the foundational teachings and thus the establishment of what a child will hold in their heart and mind the remainder of their days.

All children are living sponges. And through indoctrination in public schools with their curriculums that appear to have been handwritten by Satan himself, and they were in effect since they were developed, schemed, devised, written and then implemented by his minions and ministers — it is of the utmost importance a godly and upright Bible-believing home with parents are to take the responsibility in the main rearing and instruction of their children. And not hand them off and allow them to spend so much time in the company of strangers to indoctrinate them in the ways the world is going, and to the goals, the world desires to achieve.

Which are all anti-God, anti-the Lord Jesus Christ, anti-Holy Spirit, anti-Holy Bible, anti-respect, anti-American, anti-Christian, anti-Jew, anti-every foundation established and to supplant all with the lies and doctrines NOT of progressives, liberals, the left and we stop there in our speaking of this, writing of this, understanding of this. No, dear ones, to leave all that is taking place at some political party, some political movement, as something solely happening in America, as some public institution or political-ideological leaning doctrine totally misses the mark.

All that is taking place — right down to and including public and private school curriculums are part and parcel of the spiritual war taking place within and around every being on earth. Including the children. Evil used to work in the dark. Keeping hidden much of the time. Evil grew bolder in time as it discovered people have no problem in the mid to late 20th century and early 21st century speaking, doing things considered totally forbidden openly in every previous generation, culture or society worldwide.

Evil is in the wide-open light of day now sowing its darkness, its lies, its eternal death in opposition to God, and the Word of God.

All that is transpiring right before every person now does not halt at the political ideology door of either liberal or conservative. Do not be so naive.

Everything springs forth from the root. The seed that holds the energy that when conditions are right it germinates, takes root, grows and spreads.

Either those seeds are from God, about the Lord Jesus Christ and His saving grace and power, His sacrifice and resurrection for the sins of all who believe in Him and obey Him, about the whole living and active Word of God…

Or those seeds sown are from the Evil One.

THAT is the root of EVERYTHING. Not American political ideologies as even today’s Christian writers contend and attribute everything to, apparently fearful of being direct, boldly stating the truth for whatever may be their reasons for their misdirecting words stating what is responsible for all that is unfolding before us.

Teach your children well. In the ways of the Lord. Daily. Nightly. Continually. Always. In the morning, in the afternoon, in the evening, at the table having actual family meals making such things integral within your families daily structure

Do not leave the village responsible for the care and instruction of your precious gift of children, for the villages are now chock full of more than one village idiot spewing lies, nonsense and evil flowing from its tongue. The villages are now full of the ministers of the devil appearing as angels of light, “Oh, let us lighten your burden and teach your lovely child, we will teach them well, we know just what to brainwash them in, we mean to teach them in…”

Same voice heard in Genesis, “Go ahead, eat, for surely you will not die…”

Do not be lax.

This war is only escalating and there is no armistice, no truce in sight. And there will not be coming around a table, weapons down peace treaty and termination of this war until the Lord Jesus Christ returns.

Do you want to wait until then, no matter when that will be, permitting the state, strangers, the ministers of the Evil One to capture the heart and mind of your children?

Or should you obey the instruction of the Word of God in that responsibility?

Train up a child in the way he should go: and when he is old, he will not depart from it.

Give ear, O my people, to my teaching;
incline your ears to the words of my mouth!
I will open my mouth in a parable;
I will utter dark sayings from of old,
things that we have heard and known,
that our fathers have told us.
We will not hide them from their children,
but tell to the coming generation
the glorious deeds of the LORD, and his might,
and the wonders that he has done.

No village in those words. Only instruction to a godly people desiring to serve and please the Lord their God. Understanding it is their responsibility, as the parents, as instructed by God, to raise, to teach, to train their children in the ways of the Lord and His Word — not turning them over to the world to be fed its lies and teachings leading only to eternal death. And it now begins immediately. For even kindergarten is no longer the domain of idyllic days napping, drinking cold milk, and coloring while sitting and hearing wonderful stories. Now even as early as kindergarten have become the training ground of the devil, as evil now knows in order to get more of its way it no longer ought to concentrate on older children in their teen years or adults — but to begin immediately, very early on in the daily indoctrination, the daily brainwashing it can capture and enslave an entire generation, multiple generations as its minions and ministers gladly do its work every day in places called schools.

Kindergarten History Lessons in Virginia to Focus on Slavery

“Activism and action civics” opportunities for young students will be promoted.

Loudon County has elected to partner with the disgraced far-left Southern Poverty Law Center (SPLC) to develop the new curriculum which deliberately paints America in a highly negative light.

“Sugarcoating or ignoring slavery until later grades makes students more upset by or even resistant to true stories about American history. Long before we teach algebra, we teach its component parts,” the curriculum reads. “We should structure history instruction the same way.”

“Students should study examples of role models from the past and present, and ask themselves, ‘how can I make a difference?'” the guidelines explain. “These conversations [about slavery] should lead into discussions about current injustices — particularly those that continue to disenfranchise and oppress the descendants of enslaved people — and possibilities for activism and reform.”

In short, public school teachers must prepare their students to take up the mantle of Black Lives Matter.

While the decision to teach five-year-olds about one of the most disturbing chapters in American history may seem extreme, it is being mirrored in school districts across the nation. The New York Times’ much-vaunted but counterfactual “1619 Project” claims to prove that “nearly everything that has made America exceptional grew out of slavery.” Despite the objections of numerous historians who dispute the narrative provided by the Times, curricula based on the Project are now proliferating at public schools across America.

The political tenor of the new lessons was confirmed by a longtime Loudon County elementary teacher who spoke with the Washington Free Beacon on the condition of anonymity because she feared for her job if her real views about the new curriculum were made known.

“I teach lower grades in elementary school.… [Never before] did I have to teach about slavery,” the teacher said. “Our standards were always [to] teach about famous Americans, George Washington, Martin Luther King Jr., people like that. But, it was all very general and the bigger picture, we highlighted their accomplishments.” She noted that the slavery is usually taught beginning in the fourth grade when students have greater maturity to understand it in its historical context.

“What they’re really trying to do is divide people as early as they can, starting now with kindergarteners. They’re really going to be inciting hate,” the teacher added. “They’re pointing out that there’s ‘whiteness’ and ‘blackness’ and that’s crazy. We never taught about that in school…. We learn about how to get along with one another and be kind and respect others. But now, with this new curriculum that they’re adding, it’s going to do the total opposite.”

Max Eden, an education policy expert at the libertarian-minded Manhattan Institute, concurred that the curriculum was not suitable for young children. “Students aren’t prepared when they’re five years old to develop a nuanced sense of history and political processes, and pros and cons of different side effects, and unintended consequences,” Eden said. “What the real goal of this is, by introducing [slavery] this young, is to try to get the left-wing, Nikole Hannah-Jones [creator of the 1619 Project], meta-political narrative into kids’ heads as soon as possible, which is basically trying to compel them to believe that because slavery happened, therefore, America is evil and you must follow the leftist idea of … how we need to overturn power in society.”

Parents in the district also expressed their anger at the politicized curriculum. “SPLC is pushing Marxist ideology more or less. They’re really pushing those concepts of ‘revolution’ and ‘dismantling the system’ that we have,” one father stated. “So rather than everyone coming together and building something great together, it’s about destroying what’s been built.”