ISRAELI PRIME MINISTER TO ADDRESS NATION AT 8PM LOCAL TIME ON IRAN NUCLEAR THREAT. Here’s what we know so far. 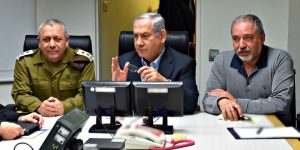 (Jerusalem, Israel) — The news is just breaking here that Prime Minister Netanyahu will speak live to the nation in a televised address at 8 p.m. local time (1 p.m. Eastern).

At this hour, the PM is meeting with his Security Cabinet.

What we’re hearing so far is that the PM will discuss new intelligence Israel has obtained about Iran’s nuclear program and new plots Iran is developing against the State of Israel.

The speech comes at a moment of high tension in the region.