Israeli archaeologists find a 3,100-year-old inscription linked to the book of Judges 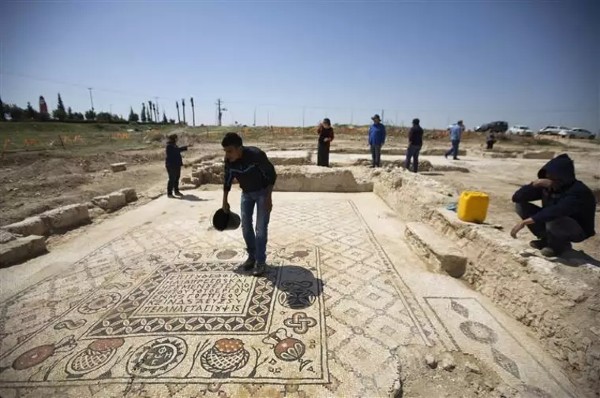 A worker for the Israel Antiquities Authority stands on the mosaic floor of a monastery unearthed during excavations in Hura, east of Beersheba. | Reuters/Amir Cohen

Israeli archaeologists find a 3,100-year-old inscription linked to the book of Judges

Israeli archaeologists excavating in the Judean foothills have uncovered an extremely rare 3,100-year-old inscription from the era of the biblical judges and carrying a name from the book of Judges.

The inscription — the name “Jerubbaal” — on a small jug from 1,100 BCE, which the archaeologists uncovered from a storage pit at the Khirbet el Rai site, could be the first hard evidence of a name from the biblical stories of the judges that is on an artifact contemporary to the period, The Times of Israel said.

“The name of the Judge Gideon ben Yoash was Jerubbaal, but we cannot tell whether he owned the vessel on which the inscription is written in ink,” the archaeologists said in a press release, UPI reported.

“According to the Bible, Gideon organized a small army of 300 soldiers and attacked the Midianites by night near Ma’ayan Harod,” lead archaeologists Yossef Garfinkel and Sa’ar Ganor, who are professors at the Hebrew University of Jerusalem, said.

The story of Gideon is found in Chapters 6, 7 and 8 in the book of Judges.

“In view of the geographical distance between the Shephelah and the Jezreel Valley, this inscription may refer to another Jerubbaal and not the Gideon of biblical tradition, although the possibility cannot be ruled out that the jug belonged to the judge Gideon,” the two archaeologists added. “In any event, the name Jerubbaal was evidently in common usage at the time of the biblical Judges.”

In any case, the discovery, which was published in the open-access Jerusalem Journal of Archaeology, is significant because of the “debate as to whether biblical tradition reflects reality and whether it is faithful to historical memories from the days of the Judges and the days of David,” they continued. “The name Jerubbaal only appears in the Bible in the period of the Judges, yet now it has also been discovered in an archaeological context, in a stratum dating from this period.”

The inscription was written in Early Alphabetic/Canaanite script, evidence of which has been found throughout Egypt and the Levant, The Times of Israel noted.

“We know very little about this period from the archaeological point of view and we (didn’t) have any meaningful inscription from this period,” Garfinkel told CBN News.

In an earlier interview with CBN News, Garfinkel said he believes pottery dating back to the time of King David, geography and biblical history all point to Khirbet el Rai as the Philistine town of Ziklag where David escaped King Saul.

Scripture has been provided by the administrator of A Crooked Path:

The people of Israel did what was evil in the sight of the LORD, and the LORD gave them into the hand of Midian seven years. And the hand of Midian overpowered Israel, and because of Midian the people of Israel made for themselves the dens that are in the mountains and the caves and the strongholds. For whenever the Israelites planted crops, the Midianites and the Amalekites and the people of the East would come up against them. They would encamp against them and devour the produce of the land, as far as Gaza, and leave no sustenance in Israel and no sheep or ox or donkey. For they would come up with their livestock and their tents; they would come like locusts in number—both they and their camels could not be counted—so that they laid waste the land as they came in. And Israel was brought very low because of Midian. And the people of Israel cried out for help to the LORD.

When the people of Israel cried out to the LORD on account of the Midianites, the LORD sent a prophet to the people of Israel. And he said to them, “Thus says the LORD, the God of Israel: I led you up from Egypt and brought you out of the house of slavery. And I delivered you from the hand of the Egyptians and from the hand of all who oppressed you, and drove them out before you and gave you their land. And I said to you, ‘I am the LORD your God; you shall not fear the gods of the Amorites in whose land you dwell.’ But you have not obeyed my voice.”

The Call of Gideon

Now the angel of the LORD came and sat under the terebinth at Ophrah, which belonged to Joash the Abiezrite, while his son Gideon was beating out wheat in the winepress to hide it from the Midianites. And the angel of the LORD appeared to him and said to him, “The LORD is with you, O mighty man of valor.” And Gideon said to him, “Please, my lord, if the LORD is with us, why then has all this happened to us? And where are all his wonderful deeds that our fathers recounted to us, saying, ‘Did not the LORD bring us up from Egypt?’ But now the LORD has forsaken us and given us into the hand of Midian.” And the LORDa turned to him and said, “Go in this might of yours and save Israel from the hand of Midian; do not I send you?” And he said to him, “Please, Lord, how can I save Israel? Behold, my clan is the weakest in Manasseh, and I am the least in my father’s house.” And the LORD said to him, “But I will be with you, and you shall strike the Midianites as one man.” And he said to him, “If now I have found favor in your eyes, then show me a sign that it is you who speak with me. Please do not depart from here until I come to you and bring out my present and set it before you.” And he said, “I will stay till you return.”

That night the LORD said to him, “Take your father’s bull, and the second bull seven years old, and pull down the altar of Baal that your father has, and cut down the Asherah that is beside it and build an altar to the LORD your God on the top of the stronghold here, with stones laid in due order. Then take the second bull and offer it as a burnt offering with the wood of the Asherah that you shall cut down.” So Gideon took ten men of his servants and did as the LORD had told him. But because he was too afraid of his family and the men of the town to do it by day, he did it by night.

Gideon Destroys the Altar of Baal

When the men of the town rose early in the morning, behold, the altar of Baal was broken down, and the Asherah beside it was cut down, and the second bull was offered on the altar that had been built. And they said to one another, “Who has done this thing?” And after they had searched and inquired, they said, “Gideon the son of Joash has done this thing.” Then the men of the town said to Joash, “Bring out your son, that he may die, for he has broken down the altar of Baal and cut down the Asherah beside it.” But Joash said to all who stood against him, “Will you contend for Baal? Or will you save him? Whoever contends for him shall be put to death by morning. If he is a god, let him contend for himself, because his altar has been broken down.” Therefore on that day Gideonc was called Jerubbaal, that is to say, “Let Baal contend against him,” because he broke down his altar.