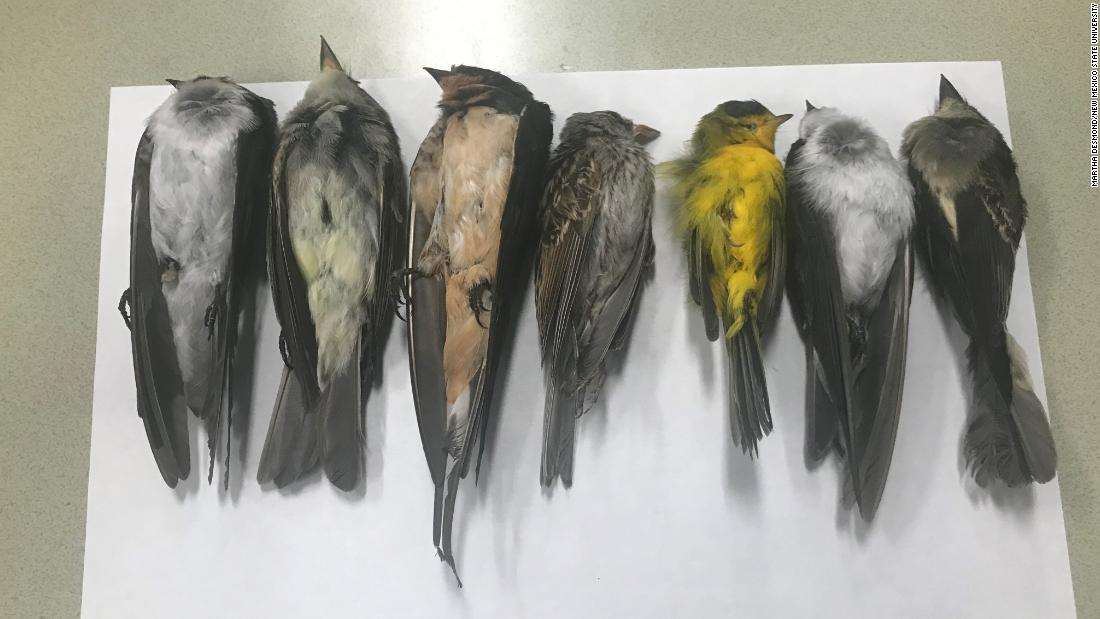 © Martha Desmond/New Mexico State University The number of dead birds is in the six figures, a university biologist says.

I am a birdwatcher. I love birds. I love all creatures God created and put on this earth. I do not worship the creature. I worship the Creator. I have bird feeders set out on our property along with suet feeders as we see five different species of woodpeckers, along with numerous other birds of the air.

While man can’t help themselves in always affixing blame to something that blame is never the sin and sinful nature of man and woman. No one says “This is due to our sinning.” Even though nothing happens randomly contrary to the myth perpetuated by the worldview.

All things happen for a reason and nothing that happens is isolated in and of itself. There are consequences. There is a chain of events.

Sure, the wildfires in Washington, Oregon, California, Colorado, and the Western United States can be attributed to the weather in part. A severe longterm drought has plagued the West. Increasing heat. And some reports state some of the fires intentionally set by arsonists.

The sins of men and women, the turning from God, and removing God from all things are part and parcel of all that happens. All that happens on this earth.

Climate change? Man cannot save the earth and the internal combustion engine and plastic straws are not, will not destroy the earth.

God is in control. The Bible states the seasons, all things will continue on the earth until such time of the end — which is determined by God and God alone.

Due to man’s sin and man’s behaviors. Man’s deeds.

And the Scriptures tell us of the devastating loss of life on the earth due to the sins of man. The disobedience of men and women. The embracing and increasing of sin as if we do not sin enough already, our abominations do not send a great enough stench up into heaven!

All that happens is not disassociated from the Bible. Nothing is random. Happenstance. It is man and woman’s deeds, condition of their hearts and minds, their actions which bring about all of this.

Has anyone even considered these fires in the West coincide with the increasing sin and arrogance, disobedience, blasphemy of many of the people living in that region? The wrath of God is not something to dismiss.

We are living in Biblical times. Do not ever forget that or think otherwise.

In fact we are living in the last of the last days of Biblical times. Life is not going to get easier or remain the same for the birds of the air, the beasts of the fields, the life in the oceans and seas, or the people on this earth.

Great trials, suffering, and tribulation is coming. The birth pangs begin. And it is not going to get easier. So, for all those out there indoctrinated and misled by all the New Age (Pagan) teachings and doctrines, all those out there deluded who are among the throngs who say, “I only want to think good thoughts and always be positive!”

Think on these things. Be positive about what reality is. What the condition of the hearts and minds of men and women truly are. What is really taking place on this earth. Be positive and think deeply and long on the truths contained in the Word of God. Think long and deeply and be positive about this — there is a God and He is sovereign and in control. There is a Lord Jesus Christ. And He is God, and He came to this world and was also fully man. He lived. He was murdered by us all for our sins as the only possible Sacrifice so any and all who faithfully obediently believe pon Him and become His disciples have eternal life. There is a Holy Spirit. A true living individual. The third part of the Godhead. Everything in the Bible is true.

Think positively on those things. Have those good thoughts in your heart and mind. Believe. And know what is and what is coming and why. Do not be deceived or make excuses or place blame any place other than where those things belong.

We may and ought to mourn the loss of all the life on earth among the birds of the air, the living things of the oceans and seas, all the beasts and creatures and creation on the land — but we ought to wail and mourn daily for the loss of so many spirits and souls given over to disbelief and their eternal outcomes.

I’ll be out as the sun which the Lord has made breaks the horizon where we live and brings its light for us to see as it awakens all the birds in the woods surrounding where we live. And I’ll fill the feeders. Fill the suet baskets on the trees. And thank the Lord for the wondrous day He has made and blessed us with. Thankful for all things. While also mourning all the great loss, and while praying for the living to finally come up on the horizon to see, to come into the Light and out of the darkness before it is too late. To believe! To believe, obey, follow, and serve the Lord Jesus Christ!

Greater loss, greater destruction, more trials, and sufferings are coming. Far greater than any of these things today. If you do not know or believe this then you need to certainly spend more time in prayer, in the study, in the reading, in meditation upon all that is within the Word of God. Come to know. Come to see. Come to believe. Come prepared.

By Alaa Elassar
September 14, 2020
Biologists at New Mexico State University are trying to find out why hundreds of thousands of migratory birds have been found dead across the state.

The mystery started August 20 with the discovery of a large number of dead birds at the U.S. Army White Sands Missile Range and White Sands National Monument, according to Martha Desmond, a professor at the university’s department of fish, wildlife and conservation ecology.

What was first believed to be an isolated incident turned out to be a much more serious problem when hundreds more dead birds were found in regions across the state. including Doña Ana County, Jemez Pueblo, Roswell and Socorro.

“It’s just terrible, the number is in the six figures. Just by looking at the scope of what we’re seeing, we know this is a very large event, hundreds of thousands and maybe even millions of dead birds, and we’re looking at the higher end of that.”

Dead migratory birds — which include species such as warblers, bluebirds, sparrows, blackbirds, the western wood pewee and flycatchers — are also being found in Colorado, Texas and Mexico.

Alongside biologists from White Sands Missile Range, Desmond and her team began identifying, cataloging and examining about 300 dead birds on Saturday to learn more about the condition they were in when they died.

Residents and biologists reported seeing birds acting strangely before they died. For example, birds that are normally seen in shrubs and trees have been spotted on the ground looking for food and chasing bugs.

Many were lethargic and unresponsive so they were getting hit by cars, Desmond said, in numbers “larger than ever seen before.”

On the missile range golf course, swallows, which are aerial insectivores that don’t even walk, were sitting on the ground and letting people approach them, she added.

One of the factors biologists believe may have contributed to the deaths of the birds is the wildfires burning in California and other Western states, which may have forced the birds into early migration before they were ready.

“Birds who migrated before they were ready because of the weather might have not had enough fat to survive,” Desmond said. “Some birds might have not even had the reserves to start migrating so they died in place.”

Some birds might have had to change their migratory pathways, while others could have inhaled smoke and sustained lung damage.

While the fires and dry weather in New Mexico may have amplified the number of migratory bird deaths, that still leaves many questions.

“We began seeing isolated mortalities in August, so something else has been going on aside the weather events and we don’t know what it is. So that in itself is really troubling,” she added.

The birds will be sent to the U.S. Fish and Wildlife Service Forensics Laboratory in Oregon for necropsies and to determine their cause of death, but it could take weeks to get results.

“This is devastating,” Desmond said. “We lost 3 billion birds in the U.S. since 1970 and we’ve also seen a tremendous decline in insects, so an event like this is terrifying to these populations and it’s devastating to see.”