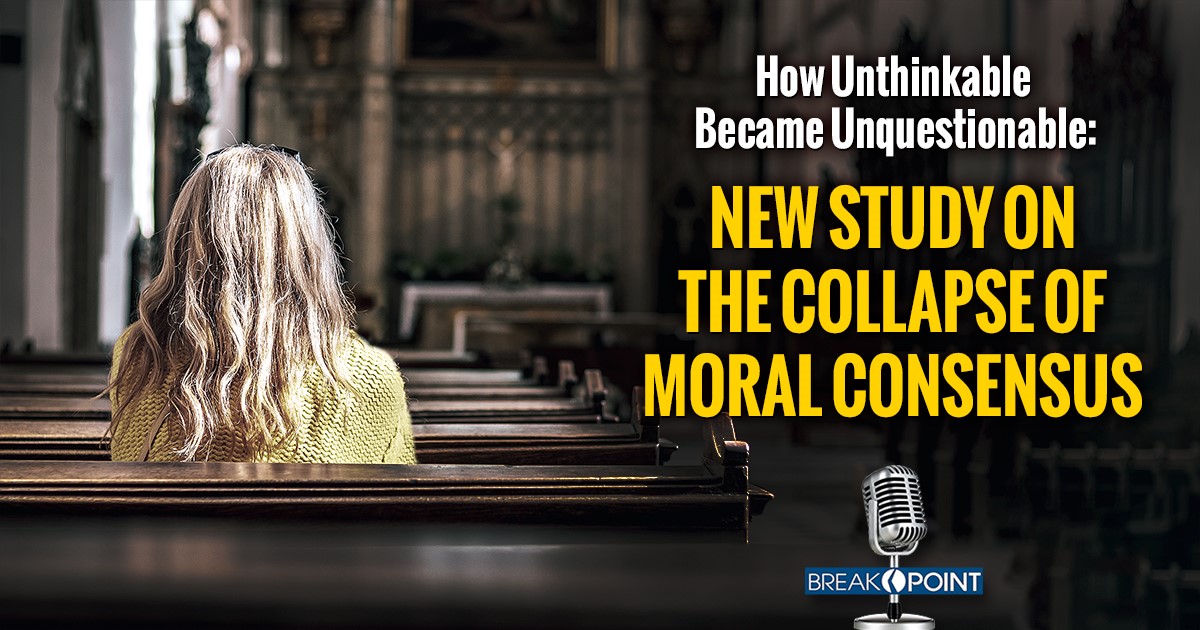 New Study on the Collapse of Moral Consensus

Anyone else dizzy by how quickly some things went from being unthinkable to unquestionable? Just in the last few years? Although the most recent demands of the Sexual Revolution are more radical than ever, people seem to be embracing them more quickly than ever.

For example, when Andrew Sullivan first made the case for same-sex marriage in the New Republic back in 1989, the very notion was considered to be beyond the fringe, and it stayed that way for about two decades.

And the pace of change on sexual issues has only accelerated. Transgenderism was considered beyond the fringe when same-sex marriage was legalized, and I predict the acceptance of polyamory could happen even faster.

So what explains this quick and thorough collapse of the old moral consensus?

That’s what I talk about on the BreakPoint Podcast this week with sociologist Mark Regnerus of the University of Texas. Our conversation dug into a recent Public Discourse article he wrote: “How the Rise in Unreligious Americans affects Sex and Marriage: Comparative Evidence from New Survey Data.”

Just after the midterm elections in November 2018, Mark Regnerus asked three groups—Catholics, Evangelical Protestants, and the non-religious—about their opinions relating to marriage, family, and sexuality. He compared their responses with those from a survey he conducted three years prior.

What Regnerus found was that the nonreligious are now even more likely to hold “progressive” views on marriage, family, and sexuality, especially when compared to self-identified Catholics and Evangelicals.

Of course, the strong relationship between one’s religious observance and their view on marriage, family, and sex is no surprise. What makes Regnerus’ study so revealing is how rapidly the number of those who self-identify as non-religious has increased. In 2015, they made up 15 percent of the respondents. Four years later, they made up twenty percent, a one-third increase in only four years.

The non-religious are often called the “nones,” and it’s important to remember that relatively few of them are atheists or agnostics. Many believe in things like astrology and witchcraft and many consider themselves quite spiritual. But they reject authoritative religious traditions and institutions, and increasingly embrace progressive views on social issues.

But the even more “ominous” trend from this study is that even though there exists a significant disparity in views between the religious and non-religious, the religious are displaying trends of increasing liberalization too. “Catholics… have witnessed liberalization in attitudes,” Mark says, though “Evangelical numbers display a more modest uptick.” Regnerus concludes that Christians seem to be growing more complicit in the Sexual Revolution, or at least more quiet about their misgivings, year by year.

Don’t miss this important discussion with Mark Regnerus on the BreakPoint Podcast. It’s a conversation that will help you prepare when the next previously-unthinkable thing becomes conventional wisdom, which, at the rate we’re going, could be next week.