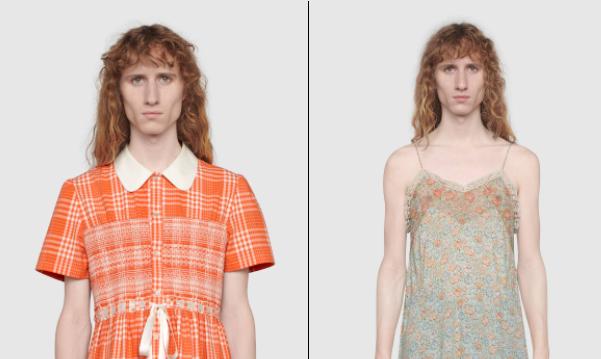 (photo caption did not appear in the original article and was added by the administrator of A Crooked Path).

The Italian fashion label Gucci has rolled out a genderless clothing section on its website called the politically correct “Gucci Mx,” which aims to “deconstruct preconceived binaries” with handbags, shoes, blouses, dress-like tunics, sweaters, and other pieces that can be worn by either sex.

“The House’s collections emphasize the dissolving lines of the gender divide in the name of self-expression,” the section reads. “Playing with the constructive nature of gender, MX underlines the performative nature of what we wear, presenting masculinity and femininity as relative concepts.”

“Gucci’s collections set out to deconstruct preconceived binaries and question how these concepts relate to our bodies,” it states. “Celebrating self-expression in the name of all gender equality, the House presents MX.”

What appears to be young men with long hair are pictured modeling the outfits, wearing them over jeans and sneakers.

“Inspired by grunge looks from the ‘90s and styled over ripped denim pants, this tartan smock in delicate colors reflects the idea of fluidity explored for the Fall Winter 2020 fashion show, disrupting the toxic stereotypes that mold masculine gender identity,” one of the descriptions under the long shirt reads.

“The contrast Peter Pan collar and smock embroidery on the front add a childhood inspired element, which ties to a recurrent theme of the collection. Pieces with versatile ways to wear and style embrace each person who is part of the House’s individual spirit,” it states.

A mid-length floral crepe slip dress with spaghetti straps and lace trim is also featured, with a male likewise wearing the piece over jeans with a brown suede jacket. Other photos, however, show him modeling the attire bare-shouldered. Gucci is selling the dress for $1,980.

“Fendi created their men’s Baguette, and Dior made a Saddle Bag for men, too. But who says a bag can or should even have a gender? Certainly not Gucci, which decided that a major component of the new Mx section is the iconic Jackie 1961 handbag, which was of course popularized by Jackie Kennedy in the 1960s, and is now available in three sizes,” also reports W Magazine.

The outlet states that brands like Telfar and Hood have already been selling unisex clothing for years.

God’s law in Deuteronomy 22:5 states, “The woman shall not wear that which pertaineth unto a man, neither shall a man put on a woman’s garment, for all that do so are an abomination unto the Lord thy God.”

The Geneva Study Bible simply writes in commenting on the divine precept, “For that alters the order of nature and shows that you despise God.”

Barnes’ Notes on the Bible remarks, “The distinction between the sexes is natural and divinely established, and cannot be neglected without indecorum and consequent danger to purity.”