Guatemalan President Won’t Let Planned Parenthood Operate in Country: ‘I Am a Faithful Defender of Life’ 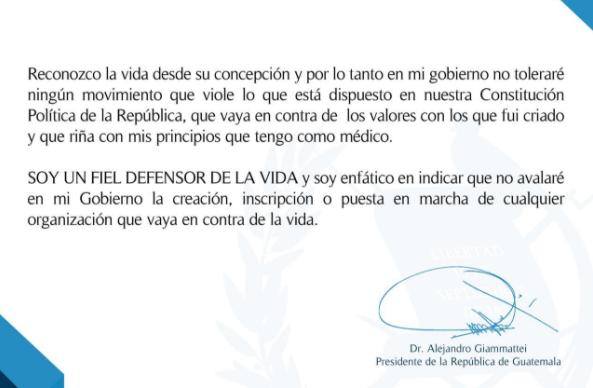 Guatemalan President Won’t Let Planned Parenthood Operate in Country: ‘I Am a Faithful Defender of Life’

The president of Guatemala has issued a statement declaring his commitment to protecting life and refusal to allow organizations that kill the unborn to operate in the country.

“I recognize life from its conception, and therefore, in my government, I will not tolerate any movement that violates what is provided in our political Constitution of the Republic, that goes against the values with which I was raised and that conflicts with the principles that I have as [a] doctor,” President Dr. Alejandro Giammattei, 64 and a physician, said in a tweet on Nov. 2.

“I am a faithful defender of life and I am empathetic in stating that I will not endorse in my government the creation, registration, or start-up of any organization that goes against life.”

Reports outline that his statement comes as the Ministry of the Interior rescinded an agreement from Oct. 7 that would have allowed the abortion and contraception giant Planned Parenthood to open a branch in the largely Roman Catholic country.

The Associated Press outlines that Interior Minister Oliverio García Rodas, who had made the agreement with Planned Parenthood,  resigned the following day. Giammattei told a local radio station that he was “surprised” by Rodas’ actions, which were published in the official gazette, and that he “immediately called religious leaders … to tell them this was not a decision of this administration and much less of the president.”

Abortion in Guatemala is illegal, except when deemed necessary to save the life of the mother. Violations are punishable by fines or imprisonment.

However, “The woman’s attempt to cause her own abortion and her own negligent abortion are unpunished.”

As previously reported, According to Planned Parenthood’s latest annual report, the organization performed a record number of abortions in the United States during the 2018-2019 fiscal year, as 345,672 babies were murdered in their mother’s womb, up 12,915 from the year prior and up 24,288 from two years ago. Government funding was also at a record high, as Planned Parenthood received over $616 million in reimbursements and grants.

The organization also partners with organizations in 12 countries worldwide, with “focus countries” listed on its website including Ecuador, Nicaragua, Peru, Uganda, Kenya and Senegal.

As previously reported, Christians throughout history have viewed abortion as a violation of the biblical command, “Thou shalt not murder.”

Proverbs 6:16-17 states that God hates “hands that shed innocent blood.” Ecclesiastes 11:5 says, “As thou knowest not what is the way of the spirit, nor how the bones do grow in the womb of her that is with child, even so thou knowest not the works of God, who maketh all.”