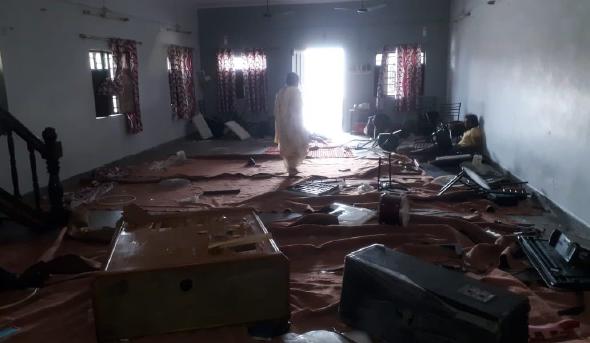 The scene of devastation after church property was vandalised [Image credit: The Wire]

Five people sustained injuries during an attack on a church in Uttarakhand state in northern India on Sunday 3 October.

The attack took place at 10 a.m. as the morning service was beginning in Haridwar district, Roorkee. A 200-strong mob of radical Hindutva nationalists armed with iron rods burst in, chanting slogans and vandalising church property including furniture and musical instruments.

Three of those injured had to be taken to hospital in Uttarakhand state capital Dehradun, at least one – a church volunteer – in critical condition.

The attackers also damaged CCTV cameras and destroyed a mobile phone that was being used to live stream the service to other church members.

BJP state president Madan Kaushik denied that party members were involved, claiming that local residents had reacted angrily to the church premises being used for the conversion of Hindus.

On Monday 4 October a case was registered against Lanse and nine other members of the church following an FIR by a woman known only as Sonam, who claimed to have been offered money and employment in return for converting to Christianity.

Lanse dismissed the accusation, adding that as a retired widow she is in no positon to offer payment as a means of gaining converts.

A senior police officer disclosed that the FIR registered against Lanse was unfounded, having studied nearby CCTV footage. He added that all those named in Lanse’s initial FIR for attacking the church were being traced and arrests were imminent.

Uttarakhand is one of nine Indian states to have enacted anti-conversion laws that criminalise any act of conversion using fraud, force, or allurement. A tenth, Karnataka, is already treating conversion activities as illegal and plans to introduce legislation soon.