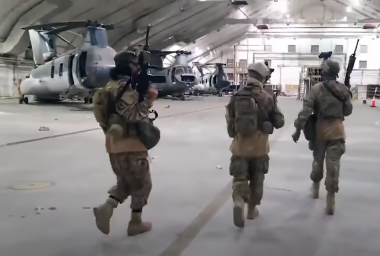 Taliban fighters walk through Kabul airport after the departure of the last remaining U.S. troops in August 2021.(Photo: L.A. Times)

Fears are growing for Christians in Afghanistan – most of whom are converts from Islam – after the Taliban launched a brutal crackdown on journalists and protesters calling for greater freedoms and the protection of women and girls.

At least four people have been killed at protests following the fall of the country to the Taliban on 15 August.

Other protesters have been beaten and whipped.

Journalists in Afghanistan told the BBC this week that they had been beaten and flogged when they tried to report on the protests.

International Christian Concern (ICC) said the Taliban’s violent response to dissent is an indicator of how it will treat Christians.

The religious liberty group said Christians in Afghanistan were already living in fear of the Taliban’s strict enforcement of Sharia law, and warned that they will not only be seen as second class citizens, but as “criminals” deserving punishment.

ICC’s Regional Manager for South Asia, William Stark, said, “We here at International Christian Concern are deeply concerned by the Taliban’s crackdown on protests and journalists in Afghanistan.

“The actions of Taliban authorities are an indicator of how they will rule and likely treat minorities.

“We are especially concerned for what this means for Afghanistan’s Christian community. As converts from Islam, Afghan Christians will not be viewed as a religious minority, but a community of criminals the Taliban must punish.”

Estimates as to the number of Christians in Afghanistan ranges from 5,000 to 12,000. They are forced to practise their faith in secret due to intense persecution.

“Prior to the Taliban’s takeover of the country, Afghanistan was one of the hardest places in the world to be a Christian,” Stark continued.

“With the Taliban now in complete control and likely to return the country to the oppression of the 1990s, it will be nearly impossible to be a Christian in Afghanistan.”