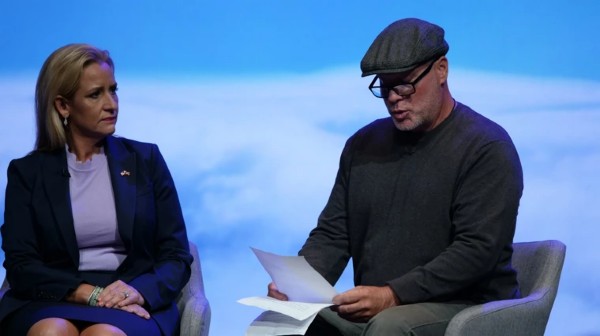 Brenton Netz (L), the concerned father of a child with gender dysphoria, details how his son was convinced that he was a “transgender lesbian” at the Pray Vote Stand Summit in Leesburg, Virginia, Oct. 8, 2021. Arkansas Attorney General Leslie Rutledge looks on. | Family Research Council

The following is the reality of the rapid sinful decline of a nation, a people. Does anyone truly believe this nation, this world has another 100 years remaining? Longer than that?

I would never write or say, make a proclamation which goes against the Word of God, in stating when the Lord Jesus Christ will return a second time — but as our people plummet deeper and deeper into darkness and the sexual immorality and making laws lawless prevail, the blatant turning from God, Jesus, the Holy Spirit and the Word of God. The increase in false teachers and their teachings leading millions astray…

We dear ones are in the last of the last days. The erosion, the love, and lusting of the following sin is consuming people.

We are alive and not well at all in Romans 1.

Are we diligently, intently, continually, within the Word of God? Daily?

Not merely reading but having the Word ingrained, grafted, implanted in us? Seeking, asking faithfully of God for spiritual wisdom, understanding, and guidance in His light, His Word in these increasingly dark times.

For that is the only way to see, to walk, to fight the good fight to the end. Not being consumed of this world but in our consumption and ingestion of the nourishing life-giving Word of God.

That is what a true survivalist knows and does.

They live within and from and by the inerrant infallible living Word of God.

In times such as these and what is swiftly coming.

If not turning, repenting, and serving the Lord this day as we ought to the time is present where we need to be keen spiritually. To endure.

Not Americans. But GOD’S PEOPLE. True children of God. True disciples of the Lord Jesus Christ. It is upon true believers to repent, to pray, to be faithful, to gird their loins and put on the full armour of God and be enjoined in the spiritual war not imagining they can sit idle, they are saved so they can do whatever they want.

We are to know and apply the Word of God in our lives. To bear fruit. To be a light in this darkness.

There are no spectators, no conscientious objectors in this spiritual war.

Do not be deceived. Do not allow the murky words and ways of the world to be stirred in the clear life-giving words of the Holy Bible.

Leesburg, VIRGINIA — A concerned father of a child whose mother is trying to convince her autistic son that he’s a girl is warning about the dangers of “radical gender ideology,” proclaiming that “we must do everything we can to save them from the jaws of this beast.”

On the final day of the Family Research Council’s Pray Vote Stand Summit, a panel of elected officials, journalists and activists addressed a crowd of social conservatives gathered at Cornerstone Chapel. They discussed the extent to which gender ideology has permeated American society.

After Backholm mentioned the astronomical rise in the number of cases of gender dysphoria in children, Netz elaborated on his “legal battle to prevent his son from being given experimental gender transition” drugs, such as puberty blockers, against his will.

Netz recalled the shock he felt upon reading notes from his then-8-year-old son’s therapy session with a gender clinician in St. Cloud, Minnesota, who asserted that “Miles reports her sexual orientation as lesbian” and “she reports her gender as transgender female.”

Netz described his son as a “vulnerable child” who was “diagnosed with autism at the age of 4” with “an obsessive personality” and “other real behavioral issues.” He criticized the therapist who treated his son, Troy Weber-Brown, for referring to his “autistic son as a girl named Miley using she/her and them/their pronouns.” Weber-Brown is a licensed family and marriage therapist who specializes in lesbian, homosexual, bisexual, transgender, and queer behavioral healthcare.

The father condemned the “appalling way he (Weber-Brown) counsels troubled and vulnerable children,” adding “his stated goal is to re-parent them.”

“In my case, Troy set himself up as my son’s surrogate father,” Netz said. “He meticulously manipulated my son into thinking he was not only a transgender girl and lesbian, but they were also having structured discussions about irreversible hormones and surgical options.”

“There is no way my autistic little boy voluntarily self-identified as a transgender lesbian unless he was convinced of that by an adult,” he asserted.

Netz noted that during the therapy sessions, his son’s “crotch area was examined to see how much pubic hair he had to determine if he reached the beginning stages of puberty so a referral for hormone blockers could be written.”

Netz lamented that the medical establishment and family courts have been “steadily corrupted by … postmodern gender ideology.” He concluded his opening remarks with a call to action.

“Our kids are under attack,” he said. “We must do everything we can to save them from the jaws of this beast.”

Netz identified himself as “the only adult in my son’s life who is not affirming … his delusion.”

“[T]he schools are calling him Miley. … Everybody in the medical establishment treats him as a girl, calls him Miley,” he explained.

“In our case, what has happened is there’s kind of this gridlock that happens because the medical establishment will say well, it’s a family court issue. … You can get this solved by going to the family court. Then you go to the family court, and they can’t solve it either.”

As a divorced parent, Netz has custody of his son “every other weekend plus a lot more time in the summer.”

“If anybody met my son, within the first five minutes, you would realize that … he’s incapable of coming to those conclusions.”

Backholm attempted to explain the reasons behind the increased prominence of children with gender dysphoria and the push to “affirm” children in their chosen gender identities. He cited reporting from Abigail Shrier, journalist and author of the book, Irreversible Damage.

The former Planned Parenthood employee told Shrier that those decisions were made by a clinic manager who had “no prior medical experience and whose former job was managing at Wendy’s.”

The former employee characterized children with gender dysphoria as “cash cows” because, in many cases, “they are kept on the hook for the foreseeable future in terms of follow-up appointments, bloodwork, meetings, etc.”

While Planned Parenthood is known for performing abortions, the former employee said that “abortions are hopefully a one-and-done situation.” By contrast, children with gender dysphoria are seen as longterm potential customers, giving the organization a financial incentive.

Netz agreed that every child is vulnerable prey for agenda-driven gender clinicians.

Backholm held up the SAFE Act as an example of a legislative solution to combat the harm of “radical gender ideology,” including cross-sex hormones and puberty blockers.

SAFE is an acronym for the Saving Adolescents from Experimentation Act. He cheered Arkansas for becoming the first state to pass the “model legislation that prohibits the gender transition procedures or chemicals being given to minors.”

Rutledge informed the audience that she was “wholeheartedly defending the SAFE Act.” Netz offered praise for the SAFE Act as “a necessary measure to protect children from this mess.”

Showalter illustrated how Netz’s situation is not unique.

“I have never heard such excruciating anguish from moms and dads who somehow manage to find my journalistic work at The Christian Post.” He added that “many of them are not even Christians, they’re not conservative. I’ve received phone calls from atheists, left-wing people who say they can’t believe they’re reading CP now.”

Showalter has engaged in several conversations with parents experiencing “off-the-charts pain and anguish as they are forced to watch the slow-motion dissociation and chemical disintegration of their own children.”

He told the story of a mother who had an 18-year-old daughter with a developmental delay. The daughter went to Planned Parenthood and was given a prescription for testosterone “based on her own self-diagnosis” within 30 minutes.

“So this mom wanted to see how easy it would be for her to get testosterone” as a 50-something, he added. “She was given testosterone within 30 minutes. All they had to do was take the blood pressure, did a finger prick (blood test), and she declared herself the opposite sex, and all she had to do was sign an informed consent document that she shared with me.”

Rutledge also commented on how illogical it was to allow children to choose their gender while not allowing them to make other significant decisions such as voting and serving in the military. She also stressed that “kids are not even taken into consideration when their parents are getting a divorce as to … which parent they want to live with.”

“Why is it OK now for these medical providers and courts to push forward and allow these children to make life-altering, permanent decisions that are irreversible?” she asked.

As The Daily Wire reported, Netz is considering filing a lawsuit against the gender clinic that has convinced his young son that he is a trans-identified lesbian. Last year, Netz successfully obtained a court order to prevent his son, who’s now 11 years old, from receiving further “gender-affirming” treatment at the clinic.