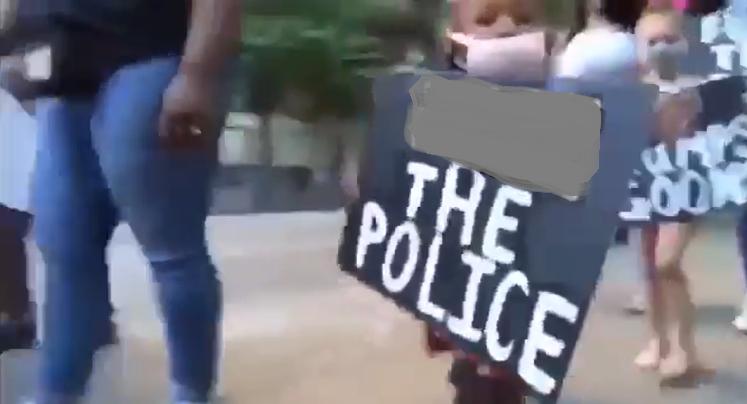 Witness here a segment of the Black Lives Matter / Antifa “Mission Statement.” Some truth regarding what is taking place and the people involved in these so-called peaceful protests by every media outlet on TV. What Black Lives Matter actually espouses and stands for.

This is what is being taught. indoctrinated. This is the mindset.

Would Dr. Martin Luther King, Jr. be proud? Is this what was in his dream? Or is this just another part of the nightmare, the web of lies and deception taking place as the vast majority of Americans in polls and surveys conducted by the Pew Research Center side with Black Lives Matter without really knowing what Black Lives Matter REALLY believes. What their true “mission statement” is, such as the destruction of the traditional family, the goal of promoting every unnatural sexual immorality under the sun, and opposed to God. Promoting and elevating lesbianism and homosexuality and transgenderism. Their goal of tearing down everything in the existing system. They are anti-Christian, anti-Jew, anti-God, anti-law and order, anti-America, anti-democracy, anti-anybody that doesn’t fall in lockstep intolerance, bigotry and racism they share. It is not about the reverence, respect, ethics, morals, and integrity of all lives as they ought to know and demonstrate and be accorded, which include black lives.

Let’s be honest folks, okay? How about we learn what these organizations, these well-financed, well-orchestrated destructive terrorist organizations stand for, what their goals really are, what they believe before jumping on their bandwagon shall we? (Find the recent Pew Research Center data on how the majority of Americans agree with Black Lives Matter and Antifa — while not realizing the two organizations are linked, without knowing who is behind them financing them and helping to organize them).

And the following is but one small example shedding light on who and what these people really are.

What can we do? What should we do? Pray. Pray for the people in the article below. Pray for the people of our nation to come out from the darkness, to allow the light and truth of God’s Word to remove the blinders from their eyes and to clean and thaw their dark cold hearts. Pray the gospel, pray the truth of God, pray the power of the Holy Spirit of God b poured out on this nation — pray that this sick, wicked, lost nation REPENTS and turns from its wickedness and towards the Lord!

(Video — NOT the one pertaining to the article content, a video explaining to children “What is Sin?”)

A disturbing video shared on social media shows three young children, as they walk along the sidewalk in protest with who appears to be their mothers, holding signs using profanity. When asked what the sign says, two of the little girls repeat without reservation, “[Expletive] the police.”

A man filming the children waves to them, and a little girl waves in return.

One of the women asks, “What does it say?” in reference to the sign. She then instructs the girl what to say, and the man filming likewise begins to ask what the sign reads.

“[Expletive] the police,” the child repeats.

Another young girl standing next to her says the same. She holds a sign that reads, “[Expletive] Trump’s goons.”

“Thanks kids,” the man says.

The video, which was shared to Facebook by American Up, has received over 700K views and much outrage from viewers.

“I have never seen anything like that. This is very disturbing, and it is brainwashing at such a young age,” one commenter wrote.

“It’s truly disturbing that parents would do that. At some point in time, those children are going to pay a price because of it,” another lamented.

“Zero class,” a third remarked. “Endangering the welfare of these children is an understatement.”

“This so sad. These parents are literally writing these kids’ narratives in stone. All I see is a future of poverty/welfare, crime, broken relationships/families. These parents are so proud of their kids, [but] it makes me sad,” another opined.

“Shameful to teach your young children like this! No wonder things can’t change!” one exclaimed.

Ephesians 6:4 teaches that parents are to raise their children “in the discipline and instruction of the Lord.”

Psalm 78 also notes, “He established a testimony in Jacob and appointed a law in Israel, which He commanded our fathers, that they should make them known to their children, that the generation to come might know them — even the children which should be born, who should arise and declare them to their children.”

“That they might set their hope in God, and not forget the works of God, but keep His commandments, and might not be as their fathers, a stubborn and rebellious generation — a generation that set not their heart aright, and whose spirit was not steadfast with God.”

Ephesians 4:29 says, “Let no corrupt communication proceed out of your mouth, but that which is good to the use of edifying, that it may minister grace unto the hearers.”