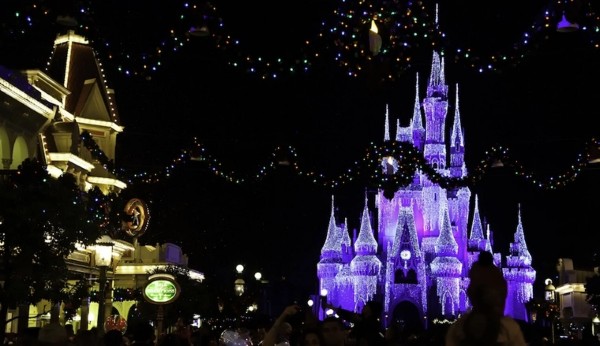 Disney is branded into the minds of Americans, and the people of the world. What once was a source, a place of amusement and entertainment, of innocence and escapism has evolved into the kingdom of evil posing as a kingdom of light and joy and goodness and being on the right side of what is right.

And they could not be more wrong.

But Satan is very adept at causing blindness, keeping people in the dark giving them the illusion of their being illuminated, enlightened, and seeing clearly.

Is this the place you want your children to be impressed with? To learn from? To absorb into their impressionable hearts and minds the indoctrination that runs every moment these places are open? And not only the physical parks. Disney Corp. has become one of the leading purveyors of all that is corrupt and perverse in our time. Do not be deceived.

Is this how you want your children taught? To learn from this? Or to learn from the word of God? To be founded in the ways of the Lord rather than the doctrines of the Disney kingdom that will only lead to death if the Lord is not heard, not present.

We have time and money for such things as all things Disney — but we do not have time or the means to feed the church. Feed the poor of wisdom, of light, of truth, or real life in the word. Feed our children in the word and ways of God, of Jesus, of the Holy Spirit — of eternal life versus eternal death.

Yes, what a small, small world it truly is…

Small in mind, small in wisdom. Huge in following darkness and the lies of Satan and seeking more and more entertainment and delusion while refusing reality and the truth.

And this is not trivial. No big thing. Something to shrug about and dismiss.

See the related Disney links after reading the article below.

Walt Disney World’s greeting for its Magic Kingdom fireworks show has been changed to be more “inclusive” by removing gendered language.

The theme park’s narration no longer says “Ladies and gentlemen, boys and girls” and has been replaced by the phrase “Good evening, dreamers of all ages” during the pre-show announcement.

This change was revealed the evening of June 29 when Disney cast members received a preview for the new fireworks show, according to the Faithwire.

A spokesperson for Disney told CBS News that the move is “part of a broader effort” to be more inclusive, adding: “It’s not about one or two things.”

Social media users have had mixed reactions to the change, with some celebrating it and others criticizing the progressive move from tradition.

The nightly fireworks show at Magic Kingdom over the iconic Cinderella’s castle in Orlando, Florida, was officially re-introduced on Thursday after a hiatus for over a year due to the COVID-19 pandemic, according to Faithwire.

Disney announced in April that “Inclusion” was added as its “Fifth Key” to guide cast members in interacting with guests. The other four keys are “Safety, Courtesy, Show and Efficiency.”

“Inclusion is essential to our culture and leads us forward as we continue to realize our rich legacy of engaging storytelling, exceptional service, and Disney magic,” a blog on Disney’s website reads.

“We’re bringing the spirit of the Inclusion Key to life across our business,” the post continued. It listed several park attractions that will receive enhancements to become “more inclusive.”

Tokyo Disneyland made the shift to non-gendered language in March to accommodate those who identify as something other than male or female, HuffPost reported.

“It is a comprehensive judgment considering the current social situation, such as diversity,” a spokesperson for Oriental Land Company, which licenses the Japanese Disney brand, said. “Currently, information on parades and shows, Country Bear Theater in Tokyo Disneyland, and the Enchanted Tiki Room: Some attractions, such as Stitch Presents ‘Aloha e Como Mai,’ have already changed.”

“The Walt Disney Company is giving funds as part of our ongoing commitment to organizations around the world that support lesbian, homosexual, bisexual, transgender, and queer+ communities,” the company tweeted with information regarding the Rainbow Collection.

Several LGBT groups supported by Disney include GLSEN, Diversity Role Models, Minus18, BeLonG To Youth Services, ARELAS and the It Gets Better Project.

Under pressure from activist groups in recent years, Disney has introduced lesbian, homosexual, bisexual, and transgender characters in its films.

The Christian Post reached out the Walt Disney World for comment but did not receive a response by press time.

No Cartoon Can Escape The Evil Lesbian, Homosexual, Bisexual, and Transgender Agenda Working To Enslave Children To Its Lies – Blues Clues & Rugrats Latest To Join