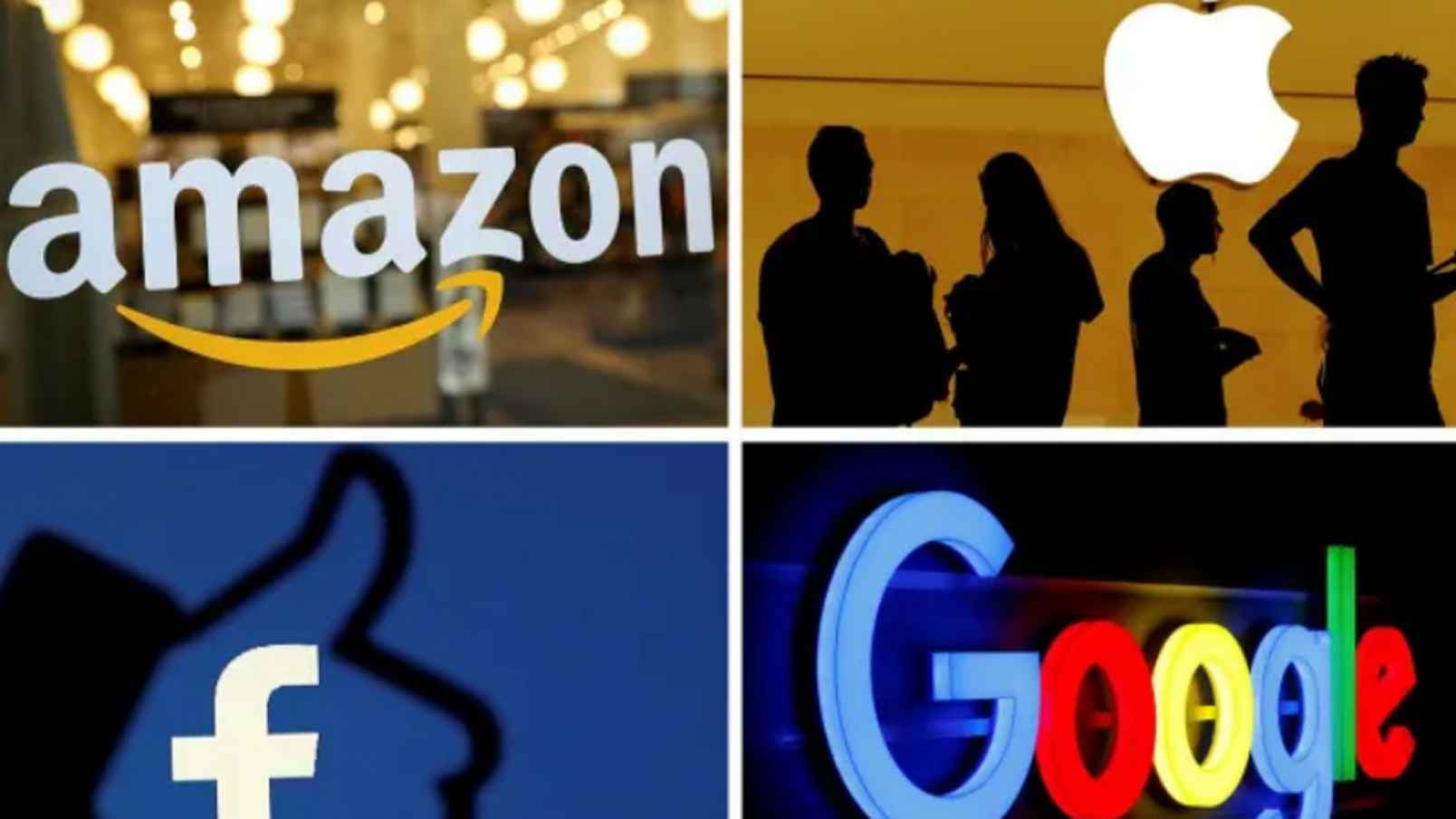 Mr. Damiel Greenfield in his article below is spot on with regard to 98% of his observations and conclusions. Spot on, Mr. Greenfield!

But…Mr. Greenfield as brilliant and talented as he is is a secular worldly writer. Not a Christian. He is Jewish and I do not know Mr. Greenfield personally to know if he is a devout and dedicated Jew or like so many American Jews, but I do know he is not a Christian man.

Probably a good man by the world’s standards. He certainly is astute, aware, observant and a brilliant writer and spot-on in his assertions and writing.

But he is a secular man. A worldly man.

And where he misses the mark in his wonderful article below, which is posted here in the hope everyone who happens on this place reads his article — where Mr. Greenfield misses the mark, and it’s the most important and powerful and truthful 2% that is missing is this — Big Tech is a tool of the devil.

Oh, please, don’t come back and say. “Well, I can find your website using Google, or I can find myriad Christian websites and translations of the Bible on Google, so it cannot possibly be a tool of the devil’s!”

Yes, what you might say is true — but the people owning and operating, the people controlling Big Tech, the power behind Big Tech is founded at its core in evil. In the ideologies of the world. Not of God, not of the Lord Jesus Christ, not of the Holy Spirit, and not of the Holy Bible.

There is coming a time and sooner rather than later when there will be no Christian content, no Bible translations on Google, Twitter, Facebook, or any of the Big Tech owned and operated platforms.

Yes, it is a grand delusion and deception at this time. A lure. Bait. To lull and ensnare. To present an ILLUSION of balance and democracy, and unbiased and all that…

…but it only an ILLUSION.

And soon, why it’s been evidenced and is evidenced more and more daily, people who can see, people who know will see more clearly that all this Big Tech, all these platforms are in truth a tool of Satan.

And they and he are working…

Please, read Mr. Greenfield’s excellent article below. But know this — the real root of it all, the real foundation of its power lies in Satan. To be used for his purposes more and more and for anything good and righteous less and less.

And this will happen as quickly when it comes as the sun sets and darkness falls, and the sun rises again in the morning…

Know the times. Know the enemy.

We’re at war. All-out war. The largest, greatest, longest, most intense, highest causality most important war ever waged and fought — the spiritual war that goes on 24/7/365 every second of every day around and within every person on this earth. No exceptions.

Long before, “In Soviet Russia, television watch you” became a staple of Cold War comedy routines, George Orwell’s 1984 novel had telescreens that broadcast propaganda and watched their citizens. Behind the satire is the core question of the struggle against Big Tech today.

Is technology going to be a tool of individual choice or social control?

Facebook and Twitter’s desperate attempts to block a damaging story about Joe and Hunter Biden is the culmination of four years of work to transform social media into the media. Under the guise of false claims about disinformation, foreign election interference, bots, networks, deepfakes, public health risks, and assorted tech paranoia, free speech died on the internet.

The moment when the White House Press Secretary had her account locked for tweeting a damaging news story about Joe Biden brought home the Big Tech reality to most Republicans.

And that’s bad news because Democrats see the internet in the same terms as Xi, Putin, or your average dictator just about anywhere in the world, as a dangerous system spouting disinformation, damaging social ideas, and disruptive political rhetoric that must be controlled using a combination of economic and social pressures, along with government regulation.

That Democrats, who once championed a free internet, now view it the same way all totalitarians do, speaks volumes not only about the death of liberalism but also about the transformation of the internet from a vox populi to a walled garden controlled by a handful of Big Tech monopolies whose cultural views and politics closely align with those of the Democrats.

The old political alignments based on questions of philosophy are being tossed aside and replaced with a new alignment based on the primevally simple questions of size and power.

The struggle is less defined by abstractions, than by the question of how much power you have.

The most striking thing about the Never Trumpers and the Rust Belt and Southern Democrats voting for Trump is how much power the former have and how little power the latter do.

Politics is being reduced to naked power.

Democrats shifted their stance on the internet because they gained control of core national institutions, in no small part through the growing fortunes pouring out of Silicon Valley which have tilted elections, financed political movements, and transformed public perspectives on social issues. And they are using their newfound power to do what the powerful always do, dismantle the safeguards of an open society so that there are no more threats to their power.

They’re doing this under the guise of fighting for equality and justice, and of waging a revolution for the oppressed, but so did most modern tyrants from Stalin to Hitler to Mao.

The Democrats are no longer interested in a free internet, for the same reason that they’ve tossed away free speech, the filibuster, or any institution or procedure that isn’t serving their interests this very minute. This isn’t due to a new progressive enlightenment, Republican obstinacy, grave new threats to democracy, or any of the other talking points they serve up.

The simple answer is that they won.

The Democrats of the 90s who welcomed an open internet were waging an uphill struggle against the open institutions of a generally conservative country. The country is now much less conservative, the institutions are much less open, and every major institutional force, from the biggest companies to the media, is unreservedly and uncritically backing them every step of the way, while suppressing any suggestion that they shouldn’t rule unopposed for all eternity.

All that’s left is collecting their winnings by shutting down the opposition.

Support for free speech is a matter of principle and practical politics. America was built on principle, but the Founding Fathers had a common-sense assessment of human nature. Free societies may be built on principles, but they survive through a balance of power. Every major faction must go on believing that it is in its interest to maintain free speech, checks and balances, and other protections against tyranny because it might end up needing them.

The Democrats have accumulated enough power that they no longer think that they need firewalls because if they play their cards right, the future, the right side of history, is their own.

That’s the fundamental development that explains the current crisis, not only of free speech, but of free elections, and a free country. The internet, like any society’s marketplace of ideas, is a symptom. Free countries have a robust marketplace of ideas. Unfree ones are obsessed with censoring speech and monitoring their citizens, all the while spinning paranoid fantasies about foreign interference, the threat of dangerous ideas, and the risk to political stability from speech.

Anyone who came out of a coma and spent an afternoon listening to CNN (owned by AT&T), reading the Washington Post (owned by the CEO of Amazon), and perusing the latest round of Democrat complaints about election interference and disinformation would know what we are.

Democrat radicalism isn’t being driven by the powerless, but by the powerful. That’s why Democrats with PhDs are more radical than those with a high school diploma. The problem of Big Tech can’t be separated from the problem of a political movement with too much power.

America has been reconstructed to favor some classes at the expense of others. This new machine combining political institutions, activist groups, and corporations controls public life.

Conservatives can combat it or, like Soviet citizens, make jokes, and wait for it to collapse.

Big Tech is at the nexus of the political, economic, and cultural power of this new machine. That’s why breaking its power must be the objective of any winning conservative movement.

The massive monopolies control political discourse and as they tighten the noose around conservatives, political speech on the internet will consist of media narratives, a few tame conservatives, and little else. Imagine the high point of media dominance with no talk radio or cable conservative news. That’s the future. And it’s not going to arrive a year from now, it may already be here by Election Day. And if not, certainly when the next presidential election arrives.

But Big Tech also holds the key to the radical money machine. AOC and the Squad wouldn’t exist without a founding engineer from Stripe. The founder of eBay is responsible for everything from The Intercept to The Bulwark, the former is the media arm of the Sanders campaign and the latter of the Never Trumpers. The Washington Post was transformed from a fussy government paper into a den of furious radicals by the CEO of Amazon. Google money financed the Bernie Sanders campaign. Big Tech has poured a massive fortune into Black Lives Matter, from Steve Jobs’ widow, to Jeff Bezos’ ex-wife, to Jack Dorsey, the founder of Twitter.

And that’s the tip of the iceberg considering Facebook’s Chan-Zuckerberg Initiative.

The cultural power of Big Tech is even vaster. Google and Facebook determine what most people see on the internet. Amazon and Netflix are swallowing the entertainment industry. In a decade, a handful of vast, mostly, tech companies, Apple, Amazon, AT&T, Disney, Google, Netflix, and Verizon will control the culture far more than the old entertainment industry ever did.

By then it will be much too late to do anything except huddle in a few dark web outposts and mutter hate speech like the controversial words of the First Amendment.

Big Tech’s power is growing exponentially, but it’s still vulnerable. The companies that will become immovable oligarchies in a decade can still be brought down and broken up. The internet and the marketplace of ideas can rise again from the ruins of those monopolies.

Now is the time. If we don’t fight Big Tech now, America has no future.